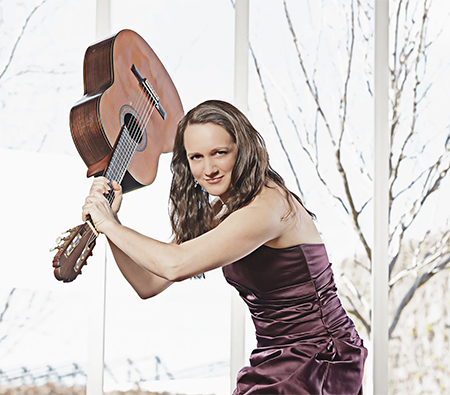 If it’s the beginning of June, it’s time for classical guitarists from around the world to gather at the Cleveland Institute of Music for the annual Cleveland International Classical Guitar Festival. And as we have come to expect, the 2019 edition, which ran from Thursday, June 6 through Sunday, June 9, artistic director Armin Kelly assembled an outstanding lineup of performers, clinicians, and lecturers.

On Friday, June 7, in Studio 113, Lynn McGrath (above) presented a delightful lecture recital titled “Guitar with Spoken Word.” The hour-long program featured selections from Mario Castelnuovo-Tedesco’s Platero y yo (“Platero and I”), during which McGrath both played the complicated musical score and intoned the Spanish narration. Throughout, she handled her double duties with aplomb.

Inspired by the 1914 book by Nobel Prize-winning author Juan Ramón Jiménez, Platero y yo tells the story of a poet and his silvery gray donkey, the poet’s traveling companion and confidant. The pieces describe events in the lives of the two characters as they reflect on the people and places they visit around their Spanish village.

McGrath told the good-sized audience that she had chosen the work while looking for a project for her final doctoral lecture recital at the University of Southern California. She said that prior to her music career, she had earned degrees in Spanish language and literature, and that this piece brought together all the things she loves. “I love the Spanish language and literature, I love animals and nature, and the poetry is so beautiful.” When she realized she did not have enough money to pay a narrator or fly them to Los Angeles, she decided that she would do it herself.

McGrath also added some background information — Ramón Jiménez was part of the symbolist movement, Castelnuovo-Tedesco was also a noted Hollywood film composer, and Platero y yo was not “a real story,” but rather a series of vignettes.

Prior to each of the seven chapters she performed, McGrath recited the narration in English and explained how the music would serve that story. “Platero” introduces the small silvery donkey. Parallel harmonies represent “El Pozo” (the well). “Amistad” (friendship) was touchingly beautiful, while McGrath’s passionate, painful delivery of “Melancolia” perfectly captured the poet visiting the grave of Platero. “La primavera” joyfully depicted the first day of spring, and “A Platero en el cielo de Moguer” (Platero in the heavens of Moguer) brought the engaging program to a poignant conclusion. 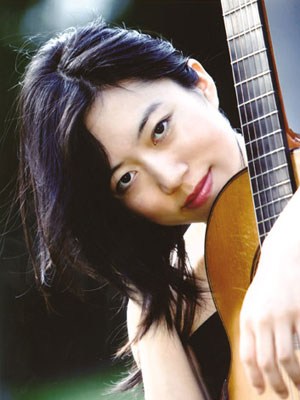 The technically brilliant and musically sensitive Yang began with a set of pieces that highlighted the influence that impressionists had on Spanish composers. Her intimate interpretation of Debussy’s La Fille aux Cheveux de Lin was followed by Manuel de Falla’s Homenaje ‘Pour le tombeau de Claude Debussy’ — the only piece he wrote for the guitar. After a fiery delivery of the “Miller’s Dance” from Three-Cornered Hat, the guitarist made the most of Joaquin Rodrigo’s Invocación y Danza (Homenaje a Manuel de Falla). Its spooky harmonics rang beautifully in the hall.

The program then moved to China with Yang’s arrangements of Liu Mao’s attractive Yao Dance, the traditional Moonlight over Spring River which dates from the Ming Dynasty, and Xu Changjun’s energetic Sword Dance. The guitarist brought a variety of colors to each.

Following intermission Yang told the audience that the traditional Fisherman’s song at Eventide is so popular in China that it is played during the weather forecast on national television. Her striking playing wonderfully imitated the sound of the pipa. Written for Yang in 2013, Chen Yi’s Shuo Chang (“speaking and singing”) is inspired by that popular folk style of musical storytelling. Yi inventively juxtaposes the old with the new, and Yang brought those qualities engagingly to life.

After impressive performances of Albéniz’s Tango in D and Seville, Yang brought an array of colors to Granados’ La Maja de Goya and spirit to his Zapateado.

END_OF_DOCUMENT_TOKEN_TO_BE_REPLACED

Rodgers & Hammerstein’s Cinderella was originally produced for television in 1957 — seven years after the animated Disney film was released — and starred Julie Andrews. According to the Rodgers & Hammerstein website, it was viewed by over 100 million people. END_OF_DOCUMENT_TOKEN_TO_BE_REPLACED

The story line has its origin in an 1855 play and an 1842 farce that Thornton Wilder mined for his 1938 play The Merchant of Yonkers. When that turned out to be a flop, in 1954 Wilder made the crucial decision to re-center the show around the character of the legendary marriage broker Dolly Gallagher Levi and renamed it The Matchmaker. END_OF_DOCUMENT_TOKEN_TO_BE_REPLACED

The Dodero Center for the Performing Arts at the Gilmore Academy in Gates Mills is one feature of an impressive campus. The auditorium is shallow, the stage is deep, and the ensemble played without a shell. Throughout the program, the sound, especially in instruments’ lower registers, tended to disappear. END_OF_DOCUMENT_TOKEN_TO_BE_REPLACED