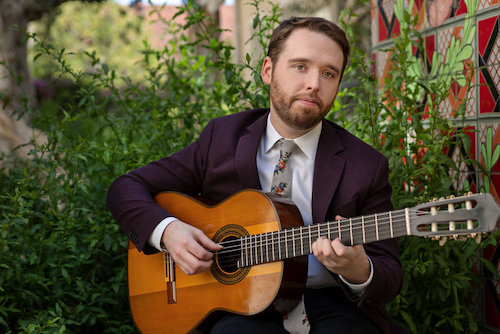 Leo Brouwer’s Sonata del Caminante is a remarkable piece in its own right. But it also has a personal significance to guitarist Colin Davin, who will play it during a virtual recital that airs on YouTube on Friday, June 11 at 7:30 pm as part of the Cleveland International Classical Guitar Festival.

“This piece has meant a lot to me this year because it got me out of my rut,” Davin said during an interview last week. “Like a lot of artists, I had a real valley of motivation. I was still going through the motions — I got the guitar out every day and did some technique work — but I was pretty down.”

On better days, he’d do some sight-reading, and on one of those days, he picked up the score to the Brouwer. “And something just clicked — like, man, this is cool, this is great — and I got the spark back.”

Composed in 2007, the Sonata was dedicated to Odair Assad. “He’s a monster guitarist who can do a lot of stuff that most of us can’t,” Davin said. “So we have Brouwer, who before injuries was quite a virtuoso himself, writing for a great virtuoso. I was kind of like, let’s see if I can hang on.” And he did. “For whatever reason, a lot of Brouwer’s guitar tricks clicked for me pretty quickly.” (He’ll say more about those tricks during a brief talk as part of his program.)

If you were to describe the piece as “contrasting,” you’d be underselling it by miles. Davin talked me through some of its sudden changes, like how the beginning moves from ethereal and spacious to — in the snap of your fingers — violent and perhaps atonal, before returning to serenity. “And so it goes through much of the piece, particularly the first and second movements.”

The second, titled “El Gran Sertao,” refers to the region that Davin described as Brazil’s equivalent of the Australian Outback, “full of vast, desolate plains.” He noted the “spare beauty” of this music, in addition to the “rapid, atonal or semi-tonal interruptions — it’s like you’re up on a plateau looking out over this landscape, and then you notice this little critter go by.”

Though Brazilian influences run through the piece, and in fact its dedicatee is Brazilian, Davin said that the third movement is the most Cuban, reflecting the roots of the composer himself (below). “It has a lot of great three-against-two rhythms, and a lot of bitonality. So you’ve got two rhythmic things and two harmonic things going on at once.” 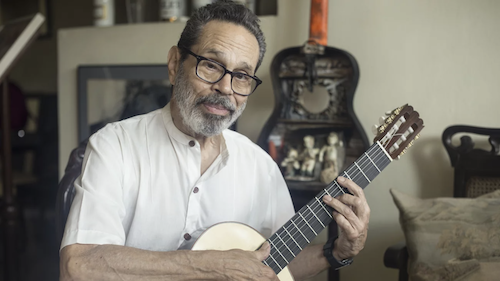 By the end of the four movements, Davin said he needs a break. “It’s breathtaking literally and figuratively — it’s a workout.” He also felt that it’s perhaps a bit too weighty to end on, “especially since there’s another set to be heard that evening from the fabulous Duo Melis.” The Duo will follow with a video recital of their own, continuing the split-bill nature of the Festival’s programming. “I’m really looking forward to sharing the virtual stage with them.”

Davin will follow the Brouwer with something “slow, pretty, short” — Manuel Ponce’s Estrellita in an arrangement by Celil Refik Kaya, a work he recorded earlier this year for a concert with soprano Estelí Gomez. “I loved playing that piece, and I added a little improvised prelude because I was in the mood,” he said. 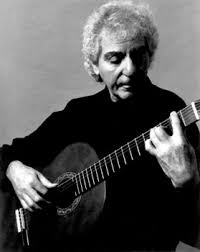 Then he’ll close with Jorge Morel’s exciting and rhythmic Danza Brasilera, “which also serves as my not-especially-somber memorial tribute to the great guitarist and composer who passed away this year.”

As a young musician, Davin penned a letter to Morel (left) and sent it via snail mail. “He responded, and we had a phone call and talked about his music. I think I interviewed him for a school project. It was really cool — I’m just this kid thinking, wow, a composer’s talking to me? I never got to meet him in person, but all of the tributes people wrote when he passed described how generous he was, and how warm and giving he was with his musical talent and his advice. I really wanted to honor him with a performance.”

On the opposite end of the evening, Davin will open his program with a medley he’s arranged, bringing together Antonio Lauro’s Valses Venezolanos Nos. 2 and 3 with Pedro Elías Gutiérrez’s Alma Llanera.

“There’s this set of four Venezuelan Waltzes by Laoro, and two and three just go together so fluidly,” Davin said. “They have a similar tempo and spirit to them, the same key, and neither one is long. One day I was practicing No. 2 for fun, and I just started playing No. 3 almost automatically. I was like, oh — well, that’s how I’ll do that.”

From there, he thought of Alma Llanera, which he’d recently been playing in an arrangement by Alirio Diaz, albeit with a few of his own twists. “At this point it’s almost a patriotic Venezuelan song — not quite the national anthem, but close. And all three pieces go together well from a tonal perspective.”

Davin wrote a short, semi-improvised bridge from the waltzes into Alma Llanera, but that wasn’t the end of his improvisatory additions. Earlier in the Festival, inspired by Nigel North’s improvised prelude to his opening piece by Ennemond Gaultier, Davin got to thinking.

“There are no surviving scores of preludes by Gaultier, but it would’ve been the custom to have an improvisation or an improvisatory-sounding piece before the set,” Davin said. “I just thought it was such a lovely way of doing things, so I put a short improvisation at the beginning of my medley as well.”

Franz Schmidt’s Symphony No. 4 showcased the ensemble, under guest conductor Jonathan Berman, in the standard conventions of a not-so-standard piece. But at the start of the program, the musicians were equal partners to pianist Cédric Tiberghien, whose playing could be as bold as the full orchestra or as intimate as any instrumental solo. END_OF_DOCUMENT_TOKEN_TO_BE_REPLACED

END_OF_DOCUMENT_TOKEN_TO_BE_REPLACED

Jackson began the program with a recitation of Langston Hughes’ poem “Helen Keller” — the first of five poems by Hughes that served as interludes between each piece on the first half. END_OF_DOCUMENT_TOKEN_TO_BE_REPLACED

Pianos with pins and tape on strings, a bass drum and tam tam, crotales, Almglocken, and vibes. Microphones were hooked up all around the instruments. The feed was sent to speakers around the room. Lighting designer Nicholas Houfek hung incandescent globes over the arrangement of instruments from thin black wires stretching across the beams. END_OF_DOCUMENT_TOKEN_TO_BE_REPLACED

From the podium, Elim Chan set an ambitious tone for the evening. The rising star conductor, here in her Cleveland Orchestra debut, has a commanding style, and every twist and turn in Saturday’s performance tracked closely with her baton. END_OF_DOCUMENT_TOKEN_TO_BE_REPLACED