When the 2016 Cleveland International Piano Competition and Festival gets underway on July 24 at the Cleveland Museum of Art, patrons will discover that CIPC is a true destination event. This year’s attendees will not only get to hear a field of talented pianists from around the world compete for the first prize of $75,000 — plus three years of management services, a New York City debut, and a CD on the Steinway & Sons label — they can also attend a myriad of activities that celebrate the art of the piano.

“Creating the Festival has been an evolutionary process,” Westhuizen said, noting that it grew out of a response to surveys the Competition’s Audience Committee conducted during the 2011 competition. As a result of those surveys, special events including a Jury Round Table, Competition Conversations, and Lectures were added to the 2013 Competition in order to engage audiences in a different way.

“We hit a nerve because every one of those events was packed. There were so many people that midway through the Jury Round Table, we had to move to a larger room,” Westhuizen recalled. “People were so fascinated by everything. Basically they wanted to know what we are all about — from the impact of competitions to why certain required repertoire was chosen. We also learned that people want to be entertained when they come — so this year it’s truly the Competition and Festival. It’s all fitting together nicely. We have groups from Los Angeles who are coming and we’ve been working with the Roads Scholar Organization, which has also been very effective.”

The Festival kicks off with a Golandsky Institute Workshop on Tuesday, July 26 at 10:00 am at the Cleveland Institute of Music’s Kulas Hall. Edna Golandsky, founder and artistic director of The Golandsky Institute, will present a workshop and Q&A session for area piano students. The Institute is the preeminent center for the teaching of the Taubman Approach. “We’re thrilled that this workshop is happening,” Westhuizen said. “Taubman is a holistic approach that helps pianists alleviate technical and physical problems. There are specific causes for tendonitis and I think every player and teacher in the area should come and listen to what she has to say.”

Lectures and workshops continue on Thursday, July 28 at 10:30 am in CMA’s Lecture Hall with a Competition Conversation with the 2013 Mixon First Prize winner Stanislav Khristenko (left). The Conversation will be hosted by noted Cleveland pianist and documentary film interviewer Zsolt Bognár. On Monday, August 1 at 10:30 am in CMA’s Lecture Hall, Westhuizen will lead a Jury Roundtable Discussion. Topics such as the impact of music competitions on careers and what jurors listen for during performances will be addressed. On Thursday, August 4 at 10:00 am and 1:00 pm in Mixon Hall, members of the competition jury will present master classes for local piano students.

The Festival will also include three special performances. On Saturday July 30 at 8:00 pm in the Maltz Performing Arts Center, the dynamic piano duo of Anderson & Roe will present a concert of two-piano arrangements ranging from the sonatas of Mozart to modern music by bands such as Coldplay.

The following evening, July 31 at 8:00 pm, also at the Maltz Center, jazz pianist Dan Tepfer will present a program titled Goldberg Variations/Variations. “I thought it would be fun to have a couple of concerts of music that isn’t for solo classical piano,” Westhuizen said.

But wait — there’s more. The Festival will also include films. “The whole idea with the film series is to highlight pianists whose lives have been impacted by and have helped shape the world of piano competitions,” Westhuizen explained. All showings will be held in the Cleveland Museum of Art’s Lecture Hall. 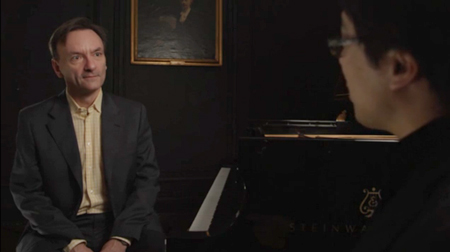 The series begins on Wednesday, July 27 at 10:30 am with the premiere screening of Zsolt Bognár’s interview with Yefim Bronfman for his Living the Classical Life series. Screenings of the series will continue on Friday, July 29 at 10:30 pm with Bognár’s interviews with pianists Stephen Hough (above) and Marc-André Hamelin.

It’s all about Martha Argerich on Tuesday, August 2. During the 3:00 screening of the film titled Argerich, Stéphanie Argerich follows her mother through the public concerts and private moments of a family who have lived in the limelight of the international stage.

The film series will conclude on Wednesday, August 3 at 3:00 pm with Christopher Nupen’s Daniil Trifonov: The Magics of Music. This new film provides a portrait of the young pianist and composer. Highlighted by interviews and concert footage, the film won a Silver Medal and the Accolade Award at the New York Film and Television Festival.

Westhuizen said he is particularly excited to have CIPC’s PianoKids program participate in this year’s Competition and Festival. PianoKids is an outreach project presented by CIPC ArtsConnect in partnership with the Greater Cleveland Neighborhood Centers Association. “We’re working with the Boys and Girls Club of Greater Cleveland, and bringing in 50 kids for an entire day at the competition. The PianoKids piano trio will do a presentation, and there will be a drum circle and an instrument petting zoo. The kids will have lunch with a contestant and attend part of a competition session. We’ll have Q&A with a contestant and me, and wrap up the day with an ice cream social.”

The cimbalom was the feature of the show, an instrument capable of taking on many personas. Its performer, Chester Englander, has shaped his career around the instrument, and has inspired composers to write more repertoire for it, some of which was presented on the program. END_OF_DOCUMENT_TOKEN_TO_BE_REPLACED

You wouldn’t expect that acoustic from a glance at the nave, which is wide and long, but not especially lofty. But when I guest conducted a local amateur choir and professional orchestra in Beethoven’s Mass in C there a few years back, during the first rehearsal we released the final chord of the “Gloria” and listened in astonishment for the next several seconds. The sound continued to roll down the space like the big wave that surfers dream about. END_OF_DOCUMENT_TOKEN_TO_BE_REPLACED