While the first and second rounds of the Cleveland International Piano Competition require contestants to show their mettle in required repertoire categories, the semi-final round turns them loose to design their own hour-long recitals — demonstrating their ability “to present a well-planned, stylistically diverse program.” Emcee Zsolt Bognár informally added the caveat that the programs should be “engaging for the audience.”

The pianists who performed on Monday afternoon and evening, August 1, certainly engaged the audience on a number of levels, though some of their programs were more varied and stylistically diverse than others. All four came out of the gate eager to impress the jury and the audience with their technique and musicianship. 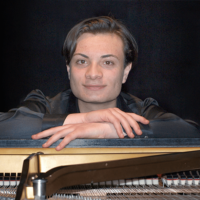 Leonardo Colafelice (Italy) began with No. 4 of Schubert’s charming Moments musicaux, followed by Prokofiev’s Visions fugitives and Mendelssohn’s Variations sérieuses — prickly Russian miniatures sandwiched between relatively gentle Romantic works. Described by a poet who heard Prokofiev play his pieces in 1917 as “worlds filled with the fickle play of rainbows,” the Visions proved to be a fine vehicle for Colafelice to demonstrate his chameleonic ability to change up his touch and color schemes many times over the course of the piece. He put his Schubert and Mendelssohn across engagingly, reining in his pianistic power to create some beautiful, lyrical moments.

With Stravinsky’s Trois Mouvements de Petrouchka, everything changed. Colafelice approached its opening parallel chords as though he were single handedly fending off an invading army. In more sparsely-textured moments, he achieved a wry sense of intimacy. The audience seemed to love his ability to sustain overpowering fortes, giving him a resounding ovation at the end. 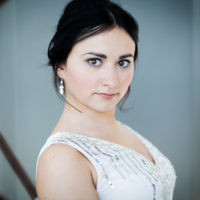 Dinara Klinton (Ukraine) built her program out of widely-varied Russian and German music. Tchaikovsky’s Two Pieces of Op. 10 made a lovely opener (the composer was obviously in a sunny mood, having written them in Nice during his sojourn in 1872). Her playing of the “Nocturne” was alluring and her “Humoresque” was full of charm and gaiety.

In his Sarcasms, Op. 17, Prokofiev experimented with the technique of writing simultaneously in two different keys, as well as exploring the idea of irony in musical terms. Klinton easily met the challenge of depicting a variety of psychological states whether through Prokofiev’s lyricism, violent outbursts, or laughter moistened with tears.

Klinton’s choice of Nos. 1-5 and 11-12 of Liszt’s Transcendental Etudes gave her the opportunity to explore a huge variety of pianistic effects and paint a variety of pictures from static landscapes to a wild horse ride, from Will-of-the-Wisps to snow drifts. Her supreme confidence and sure touch guaranteed expert performances of seven punishingly-difficult pieces. Only at a few junctures did her tone become steely or harsh. 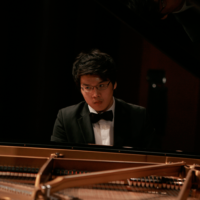 Jong Hai Park (South Korea) called the evening session to order with three ringing chords that launched his riveting performance of Beethoven’s 15 Variations and Fugue in E-flat, op. 35. He contrasted that striking gesture with a dark, singing legato and went on to explore a whole catalogue of articulations in the succeeding variations. A few nicked notes and overly-precious details took little away from his performance. His playing of the fugue was bright and cheerful, if perhaps a bit over-articulated.

After beginning Ravel’s Valses nobles et sentimentales with brash gestures and bright colors, Park settled into a more expressive and subdued tonal palette. He effectively turned his rubato on and off to point up the varied qualities of the waltzes. At the end, Park let the final quiet chord hang in the air for a long, meditative moment.

The pianist ended his set with an exciting reading of Prokofiev’s Sonata No. 7 in B-flat (“Stalingrad”), playing its opening dotted rhythms like a demonic march. Making a fine transition into its dark, brooding middle section, he made an equally compelling return to its opening material. Recurring motives pop up both in the slow movement and the frantic finale, and Park brought them to the fore with urgency. He built up such forward energy that he nearly ricocheted backward off the bench with his final release. 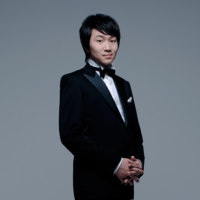 Tomoki Sakata (Japan) constructed Monday’s most varied program (Mozart, Liszt, Debussy, and Scriabin). He began with Mozart’s Nine Variations on a Minuet by Duport, K. 573, based on an original as inconsequential as the waltz that inspired Beethoven to his “Diabelli” Variations. Sakata’s elegant playing made Mozart’s extravagant runs and figuration sound easy (and Jean-Pierre Duport’s original idea seem worthy of Mozart’s elaborations).

The torso of Sakata’s program was an intense and beautifully coherent performance of Liszt’s great b-minor Sonata. Super dramatic at the outset, the pianist churned up a roiling sea with his dark cascades of notes, contrasting that with poignant lyrical lines reminiscent of Liszt’s Orpheus tone poem. Surges and moments of catharsis alternated until Sakata introduced the fugue subject with sharp accents. He ended that section fiercely, followed by a noble revisiting of Liszt’s lyrical theme and a wild coda — over all of which Sakata was firmly in control.

Two of Debussy’s twelve Etudes allowed some breathing room. Takata’s playing of the parallel chords in No. 2 was haunting, but with a big ending, while in No. 3 he sensitively explored Debussy’s layering of open fifths.

Takata ended his program, the evening, and the semifinal round with Scriabin’s Sonata No. 5, beginning with a dramatic outburst followed by colorful meandering, a syncopated scherzo, and some trademark Scriabin perfumery. Alternately scampery, rumbly, and dreamy, Takata shaped the improvisatory-sounding work expertly all the way to its final, valedictory upward flourish.

END_OF_DOCUMENT_TOKEN_TO_BE_REPLACED

The strings-only work by Berg has made relatively frequent appearances on the Orchestra’s programs. In 2021, the musicians recorded it for the In Focus series, and it appeared again on last year’s European tour. Friday’s rendition maintained the group’s characteristic light and effortless playing, each section blending as much as possible to echo the work’s original form as a string quartet. At fifteen minutes total, the piece is quite short, but the dense encoded musical meanings require some extra-attentive listening. Splitting up the three movements ensured that each one could be appreciated on its own. END_OF_DOCUMENT_TOKEN_TO_BE_REPLACED