On October 19 at 7:30 pm at the Cleveland Museum of Art’s Gartner Auditorium, Vijay Iyer and the International Contemporary Ensemble (ICE) will perform Radhe Radhe: Rites of Holi, with film by Prashant Bhargava. The program will also include the premiere of an arrangement of The Rite of Spring by Cliff Colnot. The concert is presented in conjunction with the Museum’s exhibition, Art and Stories from Mughal India.

Iyer, a 2013 MacArthur Fellow, said that while he did worry about trying too hard to represent “Indian-ness” in his work, he and the late award-winning filmmaker Prashant Bhargava did want to immerse themselves in the Hindu spring festival of Holi — also known as the festival of colors — in order to create a piece that would be profoundly human. “Prashant was a dear friend of mine,” Iyer said, and in his film Patang (The Kite), about the kite festival in Ahmedabad, India, he was able to capture both the grandeur of the festival, with a thousand kites in the sky, and was also able to tell stories simply by focusing on a face. The way he did that was to spend years standing on street corners and watching people.”

Once it was decided that the Festival of Holi would be the source of inspiration for the new work, it was Bhargava who decided to film the Festival as it is celebrated in the northern Indian city of Mathura. “There were other places he could have gone, but he wanted to go to the source, which is the mythic birthplace of the Hindu god Krishna, and of Radhe, who was Krishna’s consort as a teenager,” Iyer explained. “So the title Radhe Radhe is actually celebrating her and not him.”

Iyer said that Bhargava became obsessed with Stravinsky’s score and used a London Symphony Orchestra recording as his temp track during the cutting process. “He couldn’t let it go until he had made a perfect cut that synched with the Stravinsky, so it became almost impossible to get in touch with him,” Iyer recalled. He’d send me something and I’d watch it once with the sound, but then I’d have to mute it so I could create my own music.” 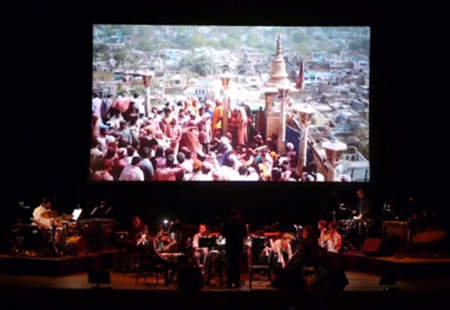 Because of Bhargava’s insistence on cutting his film to the Stravinsky, Radhe Radhe, like Rite of Spring, is structured in two halves with twelve episodes. “I created music based on the rhythms I was seeing in the film. There is music everywhere — different bands of roving troops of drummers and singers worshiping and singing devotional songs. People are wandering around throwing colored powder and liquid everywhere. Musically it came together organically over a period of nine months. And because he had created these episodes — I worked with them one at a time — it wasn’t like he dropped them all on me at once.”

Commissioned by Carolina Performing Arts, Radhe Radhe: Rites of Holi, received its world premiere during March of 2013, but soon the work went through a series of revisions. Bhargava filmed staged sequences with an actress playing Radhe, as well as paying closer attention to Iyer’s music during the cutting process. Iyer and ICE performed the revised version several times during the fall of 2014. “Prashant described that as the happiest he has ever been, especially when we did the run at BAM for the NextWave Festival. That was really amazing because everyone got into the spirit of it.”

Since that initial 2014 tour, performances of Radhe Radhe were temporarily put on hold. “Vijay’s piece couldn’t be a more colorful musical representation of Prashant ‘s film,” Joshua Rubin, ICE clarinetist and co-artistic director said during a recent interview. “It has a subtle connection to Rite of Spring, but only in form. There’s a beautiful bassoon solo that is a little bit of a mirror of Rite, but Vijay’s connections go much deeper than just literal ones. As we began to put together this tour of the work, we had the opportunity to program a new piece of music on the other half.” That new piece will be the premiere of Cliff Colnot’s arrangement of The Rite of Spring.

The relationship between Cliff Colnot and ICE goes back almost to the group’s founding, when he served as an advisor to ICE during one of their first young composers festivals in Chicago. “He listened to the pieces we had moved into our final selection round,” Rubin said. “Cliff was the conductor of the Chicago Civic Orchestra for many years, and has an amazing ear for color. He was the right person to take a bird’s eye view of the pieces, and we’ve worked together ever since.”

When the opportunity to program a piece side-by-side with Radhe Radhe: Rites of Holi, presented itself, commissioning an arrangement of Rite of Spring from Colnot was the obvious decision.

Scored for flute, clarinet, trumpet, bassoon, violin, viola, cello, bass, piano, and three percussion, Rubin described the arrangement as a chamber concerto for the ICE musicians. “It’s such a big piece, but its bigness comes from all of Stravinsky’s original and fresh ideas — the beautiful solos and chord combinations and instrumentation —  and Cliff has preserved that.”

The Cleveland concert will reunite many ICE musicians with their Oberlin mentor, conductor Tim Weiss. “He encouraged us to pursue contemporary music,” Rubin said. “He gave us the spark. We were all interested in working side-by-side with composers, so it was so natural to continue to do that after we graduated. We love to work with Tim whenever we can, and this concert is the perfect occasion to come together again.”

END_OF_DOCUMENT_TOKEN_TO_BE_REPLACED

Rodgers & Hammerstein’s Cinderella was originally produced for television in 1957 — seven years after the animated Disney film was released — and starred Julie Andrews. According to the Rodgers & Hammerstein website, it was viewed by over 100 million people. END_OF_DOCUMENT_TOKEN_TO_BE_REPLACED

The story line has its origin in an 1855 play and an 1842 farce that Thornton Wilder mined for his 1938 play The Merchant of Yonkers. When that turned out to be a flop, in 1954 Wilder made the crucial decision to re-center the show around the character of the legendary marriage broker Dolly Gallagher Levi and renamed it The Matchmaker. END_OF_DOCUMENT_TOKEN_TO_BE_REPLACED

The Dodero Center for the Performing Arts at the Gilmore Academy in Gates Mills is one feature of an impressive campus. The auditorium is shallow, the stage is deep, and the ensemble played without a shell. Throughout the program, the sound, especially in instruments’ lower registers, tended to disappear. END_OF_DOCUMENT_TOKEN_TO_BE_REPLACED