On Sunday afternoon, March 4 in Gartner Auditorium at the Cleveland Museum of Art, Tim Weiss and his Oberlin Contemporary Music Ensemble once again made seemingly easy work out of several challenging scores. It must be every composer’s dream come true to have their creations brought to life by an ensemble that can play at such a high level of precision and understanding. Surely that sentiment was shared by the good-sized audience. END_OF_DOCUMENT_TOKEN_TO_BE_REPLACED

On October 19 at 7:30 pm at the Cleveland Museum of Art’s Gartner Auditorium, Vijay Iyer and the International Contemporary Ensemble (ICE) will perform Radhe Radhe: Rites of Holi, with film by Prashant Bhargava. The program will also include the premiere of an arrangement of The Rite of Spring by Cliff Colnot. The concert is presented in conjunction with the Museum’s exhibition, Art and Stories from Mughal India. END_OF_DOCUMENT_TOKEN_TO_BE_REPLACED 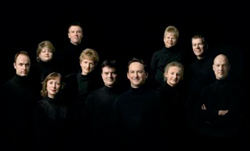 On Thursday, December 11 at 7:30 pm, The Tallis Scholars make their CMA debut with a program of Renaissance choral music by William Byrd, Josquin des Prez, and Edmund Turges. Director Peter Phillips founded The Tallis Scholars in 1973. Through recordings and concert performances, the ensemble has established itself as the leading exponent of Renaissance sacred music throughout the world. Phillips has worked with the group to create, through good tuning and blend, the purity and clarity of sound that he feels best serves the Renaissance repertoire, allowing every detail of the musical lines to be heard. It is this resulting beauty of sound for which The Tallis Scholars has become so widely renowned.

END_OF_DOCUMENT_TOKEN_TO_BE_REPLACED

Weiss, who reluctantly takes credit for forming eighth blackbird, says that he first put them together as a chamber group. END_OF_DOCUMENT_TOKEN_TO_BE_REPLACED