On Sunday afternoon, March 4 in Gartner Auditorium at the Cleveland Museum of Art, Tim Weiss and his Oberlin Contemporary Music Ensemble once again made seemingly easy work out of several challenging scores. It must be every composer’s dream come true to have their creations brought to life by an ensemble that can play at such a high level of precision and understanding. Surely that sentiment was shared by the good-sized audience.

The major work was Kaija Saariaho’s Graal théâtre, a concerto featuring the Norwegian violinist Peter Herresthal. Originally scored in 1994 for large orchestra, the work was performed on Sunday in a reduced version made by the composer in 1997 for flute, oboe, two clarinets, bassoon, two horns, trumpet, bass trombone, two percussionists, harp, and string quintet.

The program behind Graal théâtre is a bit elusive. In its two movements, referring loosely to the legend of the Holy Grail, the composer strives to unite heaven and earth in the realm of dreams — a suitable canvas for Saariaho’s signature gauzy textures, mysterious gestures, and evanescent effects.

In a conversation with WRUW radio host Eric Charnofsky just before the performance, Weiss counseled the audience not to try to understand the piece, but just to experience it — good advice that opened the ears and relaxed the intellect for half an hour of arresting musical events. 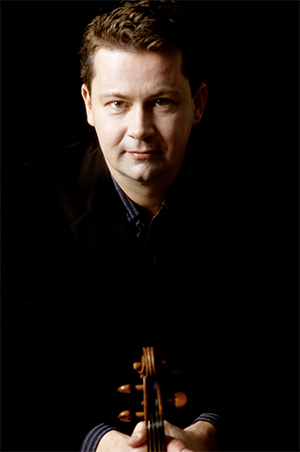 The piece begins with tremolos in the solo violin that develop into a cadenza full of harmonics. The soloist gathers more and more instruments into his narrative, only to shed his colleagues and be left alone at the conclusion. In between, rhythms develop and fade, intensity ebbs and flows, and the solo violin explores very high registers. Saariaho simultaneously holds the listener’s attention and lulls the ear into a near-somnolescent state — admittedly a bit dangerous for mid-afternoon on a Sunday.

Performing the solo part for the eleventh time, Herresthal played with easy virtuosity, a quality he also brought to a brief encore: the sneak preview of an arrangement of the final aria from Saariaho’s opera L’Amour de loin. Scored for solo violin, strings, piccolo, and harp, it was as deeply expressive as its textures were diaphanous.

Weiss filled out the hour-long program with pieces by a Norwegian composer and a current Oberlin student.

Henrik Hellstenius’ Hi — Ophelia! is one in a chain of compositions inspired by Oliver Knussen’s 1975 Ophelia Dances that explore the character of Hamlet’s potential wife. Hellstenius’ piece uses some material from his 2005 opera, Ophelias: Death by Water Singing, inspired not by Shakespeare’s play but by the old Danish chronicle the playwright used as a source.

Although it was composed in 2006, the brief work for flute, clarinet, percussion, piano, violin, viola, and bass uses instrumental techniques that seem like throwbacks to the 1970s — plunks, tweets, upward shimmers, and a whole catalog of extended techniques. Some, like the brush strokes of the percussionist, were so subtle they were inaudible.

Xue Ju’s Invocation (Blessing the Boat) was inspired by the Robin Coste Lewis poem of the same name, “a narrative poem consisting of fragmented words to visualize exhibitions of Western art objects.” The composer goes on to write in her program note that she is trying “to present a reinterpretation of this poem” through musical ideas that resonated with her.

Scored for wind quintet, brass trio, percussion, piano, harp, and string quintet, Invocation is packed with colorful timbral ideas: big, metallic chords, a woozy clarinet lick, wawa trumpet lines, instrumental passages that morph into vocal-like lines, a cadenza for harp and piano. While these fresh-sounding ideas may not conjure up for the listener the same meaning the composer attributes to them, they make the piece aurally fascinating. Xue Ju was present to acknowledge the audience’s warm applause both for her piece and its masterful performance by the Oberlin CME.

The concert, which was carried live on radio station WRUW, will be available for the next week on its website.