Weiss, who reluctantly takes credit for forming eighth blackbird, says that he first put them together as a chamber group. “I remember there were a couple of rehearsals I needed to miss and they simply rehearsed alone. Then they also wanted to enter some competitions for which they had to be an un-conducted chamber ensemble. So it was a natural move for them to begin to work without a conductor. And, they made a commitment to each other to pursue graduate work as an ensemble.” 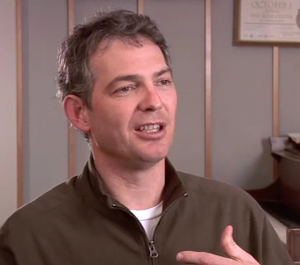 Today Weiss thinks the success of eighth blackbird is a perfect example of what can happen when you give students the opportunity to experiment. “They are great entrepreneurs, they loved playing new music together at a very high level, they gave it the time and dedication that the music necessitates. And because of that they were able to enter the industry with a whole new mark. Now I see them more than just being great players who are committed to working together, I think they are interested in contemporary music and making a connection with the public. Weiss also points out that many of the group’s members were double degree students “I think that creates interesting musicians because they did have this other academic life as students.”

“I’ve always been curious about contemporary music,” says cellist and CME member Aaron Wolff. “I know people do call Oberlin an experimental heaven.” (He has a shirt that says “My conservatory is an experimental heaven”, which he admits he wears only on occasion.) “But I feel that as a young player it is important for me to be exposed to [many styles] of music. And there are many contemporary music ensembles who are doing very well around the world and if contemporary music is going to be a way forward I want to be able to tap into that as soon as I can. I’m a huge fan of pop and rock music, actually all kinds of music, and new genres are always developing. And I feel that contemporary music combines my love for classical music and [everything else].” Wolff has enjoyed working closely with the composers. “I love to have the composers at rehearsals. I always feel like it is a real collaborative process, and the immediate feedback is wonderful to have.”

Following Friday’s concert the entire project will travel to the University of Richmond where eighth blackbird is in residence and CME will be the ensemble in residence at the University’s Third Practice Festival, an annual festival of new electro-acoustic music and mixed media run by Benjamin Broening. “Since eighth blackbird is at the University it was Ben’s idea to have Oberlin faculty composers Tom Lopez and Peter Swendsen each write a pieces for eighth blackbird and CME,” says Tim Weiss. “Logistically both works could not be mounted in one day and we needed a little time to workshop the pieces and get the kinks out. So we thought the best way to achieve this was to bring eighth blackbird to Oberlin for rehearsals and a performance of the works before we take them to Richmond.”

So what do composers Peter Swendsen and Tom Lopez have to say about their new creations? Peter Swendsen says that even before any music was put on paper he spent a lot of time at Oberlin’s Allen Memorial Art Museum. “I take my classes there and I ask my students to write pieces based on works from the museum fairly regularly.”

He also says that as much as he has been influenced by visual art, he has never sat down with thoughts of creating a piece based on a particular painting. “I spent a lot of time at the museum by myself and with curators and although I had a few finalists I eventually settled on Picasso’s Glass of Absinthe which is also the title of my composition, Six ways through a glass of Absinthe.

Swendsen describes the fifteen-minute work as dense with constant rhythmic motion which at times locks in and other times doesn’t. “It’s that same sense I got when looking at Picasso’s painting: I kind of knew what is going on but then I was being thrown off. The pitch material is almost exclusively on Stravinsky’s Petrushka chord, a work that premiered in Paris in 1911, the same year that Picasso painted Glass of Absinthe. The work’s final section also references a popular song from the same era. And there are no extensive or overwhelming electronic components, but there are some field recordings from in and around Paris.”

Tom Lopez says his work, Skipping Stones, is also the metaphor that he worked with while creating the piece. “The metaphor is important because if I wanted to share the experience of skipping stones I’d arrange for a field trip to lake Erie, but I am not trying to make a piece about skipping stones.” He does admit that the title will influence the listener.

“I worked with the notion of throwing something that lands on water, then bounces off of it creating a splash, ripples and eventually disappears.” The piece, scored for two groups of six players, consists of short motives that are tossed at and bounced off of the groups of players and the electronics produce the ripples and splashes.

“One of the interesting things to me was that I wanted the differences between the two acoustic groups to be more about timbre then pitch and rhythm.” He added that, due to his background in electronic music, timbre is what interests him most. “One of the ways I create variation is by changing the instrumentation. For example, in one group I’ve used a flute and in the second a piccolo and alto flute, as well as slide and toy train whistles. In another the grand piano tosses the motive to a honky-tonk piano then to a toy piano and thumb piano. Lopez also includes kazoos and waterphones in his instrumentation.

Swendsen and Lopez both agree that a difficult part of creating the works was not having the luxury of having the musicians present during the process. They also agree that it’s all about experimentation and they look forward to seeing how everything fits together once all the players arrive.

Jackson began the program with a recitation of Langston Hughes’ poem “Helen Keller” — the first of five poems by Hughes that served as interludes between each piece on the first half. END_OF_DOCUMENT_TOKEN_TO_BE_REPLACED

Pianos with pins and tape on strings, a bass drum and tam tam, crotales, Almglocken, and vibes. Microphones were hooked up all around the instruments. The feed was sent to speakers around the room. Lighting designer Nicholas Houfek hung incandescent globes over the arrangement of instruments from thin black wires stretching across the beams. END_OF_DOCUMENT_TOKEN_TO_BE_REPLACED

From the podium, Elim Chan set an ambitious tone for the evening. The rising star conductor, here in her Cleveland Orchestra debut, has a commanding style, and every twist and turn in Saturday’s performance tracked closely with her baton. END_OF_DOCUMENT_TOKEN_TO_BE_REPLACED