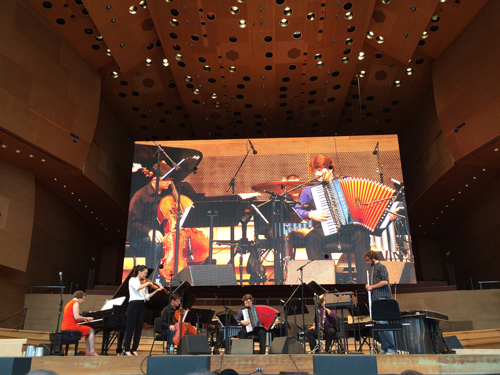 Contemporary chamber groups may be the orchestras of the future. Where in the past classical music performances were primarily dressy affairs in concert halls, that is slowly being augmented by relaxed recitals in hip venues, ideal for small, forward-looking ensembles. The versatility of musically omnivorous groups eighth blackbird is an important attribute in the age of the Internet, where genre lines are dissolving and tastes are expanding.

When you mostly present ensembles as portable as string quartets, what do you do when an ensemble requires a whole lot of percussion? In the case of the Cleveland Chamber Music Society and eighth blackbird, you move the concert to where the percussion lives — to Cleveland State University’s Waetjen Auditorium, where the celebrated new music sextet performed their acoustic program, “Still in Motion,” on Tuesday evening, April 29.

As season finales go, this was a doozy. eighth blackbird is famous for performing the unplayable and making thorny pieces engaging for audiences. As they rightly claim on their website, the ensemble “combines the finesse of a string quartet, the energy of a rock band and the audacity of a storefront theater company.” END_OF_DOCUMENT_TOKEN_TO_BE_REPLACED 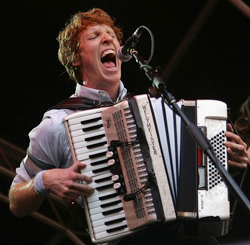 “It is an unspeakably beautiful piece. It is literally a duo for heart and breath. END_OF_DOCUMENT_TOKEN_TO_BE_REPLACED

“Expect the unexpected,” eighth blackbird’s spokesman/flutist Tim Munro told our readers in the first of these previews, but he didn’t mean that patrons should go in uninformed. Today, Tim delves into the background of two of the pieces on the ensemble’s program next Tuesday, April 29 at 7:30 in Waetjen Auditorium at Cleveland State University.

The concert will begin with Bryce Dessner’s Murder Ballades, inspired by violent stories preserved in American folk music. The piece was written for and premiered by eighth blackbird in 2013 in Eindhoven, the Netherlands, where Dessner is a composer-in-residence at the Muziekgebouw.

Tim Munro: “We met Bryce six or seven years ago when he came to some of our concerts and we were quite taken with his music. He’s kind of a wildly famous rock star (he’s a member of the band The Nationals) as well as a classically trained musician (he has a master’s degree from Yale, where he studied classical guitar, flute and composition). He has an incredibly unique compositional voice that we were excited to take advantage of. And he was quite taken with this dark, dingy, strange world of the murder ballads. END_OF_DOCUMENT_TOKEN_TO_BE_REPLACED 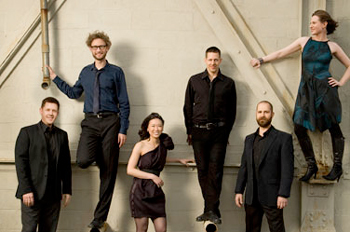 What does eighth blackbird flutist Tim Munro want audiences to know about their Cleveland Chamber Music Society program titled Still in Motion? “There are a lot of things that I love about this program, the surprising twists and turns that it takes. But I would say to expect the unexpected.”

Speaking by telephone from Philadelphia where the group serves as Ensemble in Residence at the Curtis Institute of Music, Munro said there is a duality implied in the concert’s title, Still in Motion. “Sometimes things can appear to be very still while requiring a lot of energy or requiring a lot of motion. It’s about the conjunction between those two things and the fight between those two things – the stillness and the motion. And no sooner are you lulled into a false sense of stillness and calmness, than the music takes you into another direction and moves you into motion. So the world of the concert is constantly shifting.The ground is constantly shifting under your feet.“ END_OF_DOCUMENT_TOKEN_TO_BE_REPLACED

Founded at Oberlin, the contemporary music sextet eighth blackbird had a triumphant homecoming on Friday, October 4 in Warner Concert Hall, when the three-time Grammy-winning ensemble joined with the Oberlin Conservatory’s Contemporary Music Ensemble (CME) in a brilliant concert for a large and enthusiastic crowd. Throughout the evening, eighth blackbird confirmed its reputation as one of the world’s preeminent chamber music ensembles. And from all appearances, the future of new music is in good hands with the members of CME.

Premieres by Oberlin faculty members Tom Lopez and Peter Swendsen bookended the concert. Each work is scored for two identical groups of instruments — flute, clarinet, violin, cello, piano and percussion plus electronics. Both were given inspired performances by eighth blackbird and CME.

Lopez’s Skipping Stones (2013) is an evocative work reminiscent of tossing rocks into the water while floating down a placid river — an effect achieved through the tossing of musical motives from one group of six to the other. END_OF_DOCUMENT_TOKEN_TO_BE_REPLACED

Weiss, who reluctantly takes credit for forming eighth blackbird, says that he first put them together as a chamber group. END_OF_DOCUMENT_TOKEN_TO_BE_REPLACED

Barbara Green is especially enthusiastic about the first concert in the series. “I first heard Susanna Phillips when she was still a student at Juilliard and a participant in the Art Song Festival. She had a lovely voice, a fine command of the texts, and that certain quality which I can only describe as ‘presence’. I have followed her career for many years and was delighted to read the review of her performance [at the Metropolitan Opera] in today’s New York Times. How exciting it will be to hear her again!” END_OF_DOCUMENT_TOKEN_TO_BE_REPLACED

With this work, premiered in 1907, Sibelius offered a bold departure from the explosive emotionalism so prevalent in late-Romantic era music. This symphony was a renewed embrace of Classicism’s purity of form and melody, and one that, oddly enough, left many initial audiences of the day somewhat bewildered. END_OF_DOCUMENT_TOKEN_TO_BE_REPLACED

After eating a Po’boy from The Dawg Bowl Cajun food truck, I caught the first half of Brian Culbertson’s show in The Connor Palace Theatre. END_OF_DOCUMENT_TOKEN_TO_BE_REPLACED