Confused courtship, food addiction, and 19th-century Neapolitan song provided the inspiration for three new operas, selections of which will be heard this weekend. Cleveland Opera Theater will partner with the Cleveland Composers’ Guild to present a workshop of scenes from The Higgler, Taste of Addiction, and Piedigrotta, written by Guild members Margi Griebling-Haigh, Ryan Charles Ramer, and Lorenzo Salvagni.

The piano-accompanied, twenty-minute readings will be performed on Saturday, January 27 at 3:00 pm and on Sunday, January 28 at 7:30 pm at the Maltz Performing Arts Center. Both events, part of COT’s {NOW} Festival, are ticketed but free, and include talk-back sessions with the performers and composers.

“Margi, Ryan, and Lorenzo each have incredibly unique styles,” Guild chairman Joseph Hollings said in an email. “If a music lover is looking for a way in to contemporary opera, if a veteran opera-goer wants a refreshing afternoon or evening out, or if anyone wants a chance to quiz the composers about how the musical sausage is made, they don’t want to miss this.”

We spoke to the three composers in separate interviews to learn more about their operas. 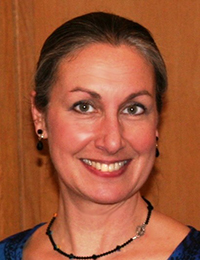 An itinerant dealer finds himself drawn to a quiet woman, daughter of the owner of a prosperous farm. Her near-silence around him begins to make him suspicious of some trap, and he impulsively weds someone else. But as that marriage goes south, he again visits the farm, where he talks with the woman and finds there was no catch all along.

Margi Griebling-Haigh adapted the libretto for The Higgler from A.E. Coppard’s 1930 work of the same name, a story she first encountered on Masterpiece Theater as a teenager. “I decided then that I would eventually write an opera on the subject — which I have now done!” she said. “The story isn’t overly complex, and with its powerful message, it’s really appropriate for this medium.”

What does she think happens at the end? “Back when I was younger and more naive, I felt that nothing more would happen, and I thought, ‘Well that’s just too bad.’” Delving further into the life of the writer has changed her mind. “He was apparently quite a womanizer with a checkered past. From that standpoint, maybe the higgler has every intention of pursuing a relationship.”

Uncertain endings appeal to Griebling-Haigh, whether in works like The Higgler or in her own compositions. “I love stories that end on a question mark, I really do. And a lot of my music does something similar, like ending with a dominant-seventh chord, just to leave you hanging. I don’t like too much finality.”

The composer described her music as approachable in its harmony, form, and rhythm. “I’ve been compared to people like Britten, Poulenc, Prokofiev, and Barber — composers whose styles might include folk elements and memorable melodic content. There’s nothing very experimental about my music, but it’s completely honest and from the heart.” 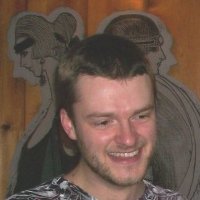 Primarily a one-woman opera with a small role for baritone, Taste of Addiction deals with a trouble that hits close to home for composer Ryan Charles Ramer. “I wanted to write an opera based on food addiction because it’s a problem that runs in my family,” Ramer said by phone. “It’s a huge issue in society today.”

The composer began with a theory about addiction: “You don’t ever get over it,” he said, “you just end up refocusing it on something else. So I thought, what happens when this women with a food addiction falls in love? She would end up becoming addicted to that person.”

Enter the woman’s pastor, Father Anthony, who pays her house calls to try to help her overcome her food cravings. Of Ramer’s two months of research for the opera, he spent the majority figuring out what Bible passages Father Anthony might share with the woman.

“It turns out that the word ‘addiction’ is not in the Bible,” Ramer said, but the seven deadly sins, which include gluttony, were identified by Pope Gregory in 600. “It became this really interesting conundrum: one of the most healing books ever written has nothing to say about the most epidemic problem in American society today.”

The solution was for Father Anthony to encourage the woman to keep a diary. “It’s kind of like her own personal Bible, so a lot of passages are about her furiously writing diary entries,” Ramer said.

The composer felt that a Romantic-period style was fitting for the music of this love story. “A lot of my influences explored that style, even if they didn’t live during the period,” he said. One particular inspiration was Poulenc’s La voix humaine. “That’s what made me want to write essentially a one-woman opera.” 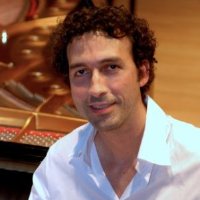 Naples, 1880. The small neighborhood of Piedigrotta is hosting its famous Song Festival, and a composer by the name of Luigi has returned home to compete in its songwriting contest.

That’s the starting point for Lorenzo Salvagni’s opera Piedigrotta, which also features a love story complicated by the Neapolitan crime syndicate. Salvagni penned the libretto, written in Italian and loosely inspired by the story of composer Luigi Denza, whose song Funiculì, Funiculà was made famous at the Piedigrotta Festival.

“I love to write and perform music that’s related to Italian culture,” said the Roman native, who serves as music director at Holy Rosary Church in Little Italy. “It’s also very much appreciated as part of the Italian-American tradition in Cleveland.”

Salvagni has included several “hidden and not-so-hidden quotes” from Neapolitan song, but he said the opera’s music ventures far beyond that. His aim was to touch on the many cultural footprints of Piedigrotta, which include a pre-Christian temple and a Roman-built tunnel that was expanded by the Spanish in the Middle Ages. The tunnel also houses the tomb of the poet Virgil, and was used as a bomb shelter during WWII.

“There are different mythical and spiritual elements that connect there, and the music reflects this in the sense that it’s not limited to any one style — not tonal, folk, or traditional Italian operatic music,” he said. “I hope to give the impression of the many layers, times, and influences in this place.”

END_OF_DOCUMENT_TOKEN_TO_BE_REPLACED

Rodgers & Hammerstein’s Cinderella was originally produced for television in 1957 — seven years after the animated Disney film was released — and starred Julie Andrews. According to the Rodgers & Hammerstein website, it was viewed by over 100 million people. END_OF_DOCUMENT_TOKEN_TO_BE_REPLACED

The story line has its origin in an 1855 play and an 1842 farce that Thornton Wilder mined for his 1938 play The Merchant of Yonkers. When that turned out to be a flop, in 1954 Wilder made the crucial decision to re-center the show around the character of the legendary marriage broker Dolly Gallagher Levi and renamed it The Matchmaker. END_OF_DOCUMENT_TOKEN_TO_BE_REPLACED

The Dodero Center for the Performing Arts at the Gilmore Academy in Gates Mills is one feature of an impressive campus. The auditorium is shallow, the stage is deep, and the ensemble played without a shell. Throughout the program, the sound, especially in instruments’ lower registers, tended to disappear. END_OF_DOCUMENT_TOKEN_TO_BE_REPLACED