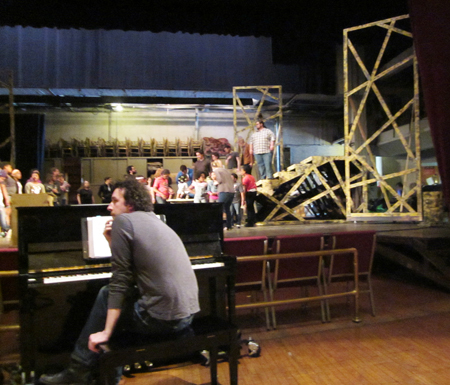 When gearing up for an opera production, one of the most exciting times is the day the production moves from the rehearsal room into the performance space. Last Saturday afternoon, May 2, a group of invited guests got the chance to witness Cleveland Opera Theater’s first day in the auditorium of the Cleveland Performing Arts Center, where on Friday, May 8 at 7:30 pm and Sunday, May 10 at 3:00 pm the company will present its most ambitious production to date, Puccini’s Tosca.

The cast includes Andrea Anelli as Floria Tosca, Timothy Culver as Mario Cavaradossi, Brian Keith Johnson as the Barone Scarpia, Robert Pierce as Cesare Angelotti, and Benjamin Czarnota as the Sacristan. The opera will be sung in Italian with English supertitles.

As the large cast gathered with the sounds of carpentry work going on, stage director Scott Skiba explained that Tosca marks the first COT production to be staged in a theater as large as the Performing Arts Center. He went on to say that the production would be set in the year 1800, although it could be taking place during modern times. “My favorite curtain speech is to tell the audience that opera doesn’t tell stories about things that happened hundreds of years ago, it tells stories about today.”

It appeared that all of the guests were familiar with the opera’s plot, which tells the story of the love between Floria Tosca, the opera singer, and Mario Cavaradossi, the painter and political activist. But the Barone Scarpia is determined to have Tosca for himself, and will stop at nothing to have her. Read a synopsis here. 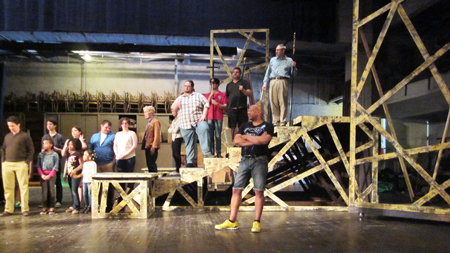 Not surprisingly, the first question was, “What will be used to break the fall when Tosca throws herself off the roof of the Castel Sant’Angelo?” “Mancino’s gymnastic mats”, Skiba replied. He went on to say that the company makes a “fluffy mat” and has actually conducted a series of tests using many different types of falls.

Architect Richard Fleischman, who designed the production, said that the sets represent a contemporary way of suggesting the city of Rome, and with the amazing things that can be done with lighting, the audience will have the illusion of space. “We know how to think,” Fleischman said, “we just need to allow our brains to take us to a different place in time.”

Lighting designer Rob Wachala talked about how the gobo lighting systems will allow him to indicate the times of day and create expansive church windows, along with the more narrow windows in Scarpia’s apartment. (Gobos are used to project a design in light. Think of a gobo as a stencil. The projection can be either a single color or multi-colored.) 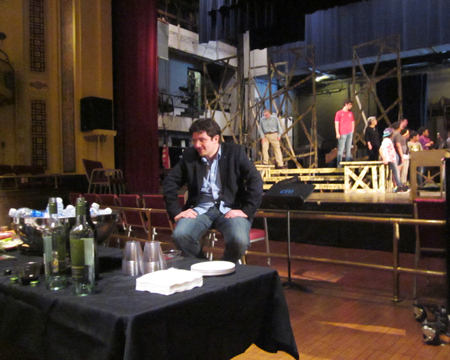 Conductor Domenico Boyagian spoke about all things musical. “The opera should have been named Scarpia,” he said. “From the beginning to the end it centers around the mind of the most terrible man in opera.” Rehearsal pianist Lorenzo Salvagni demonstrated the opera’s opening “Scarpia” chords and how Puccini uses them at various times during the opera. Boyagian explained that the following day would be the first time the orchestra and cast would rehearse together. “There will be no movement, only singing. I call it all’italiana, but it’s also called a sitzprobe. I’m very pleased with the way the orchestra has been sounding in rehearsals.”

The children’s chorus, comprised of students from University of Cleveland Preparatory School, one of the I-Can charter schools, sat quietly with their teacher Holly Huff, awaiting instructions. “The children have been just incredible to work with,” Boyagian said. “They don’t care what you ask them to do — they just do it, which is great.” 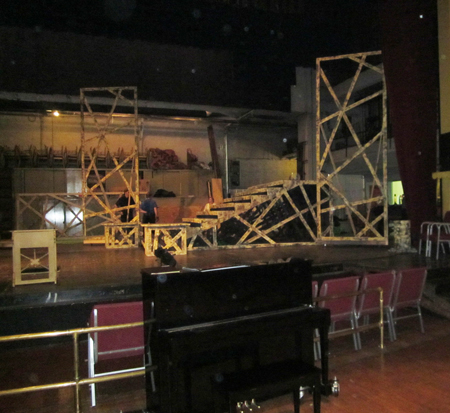 Tosca will provide COT the opportunity to use the auditorium’s four-manual, 1918 Wurlitzer theater pipe organ during the first act Te Deum. “Can we hear it?” someone asked. “If you have four hours,” Boyagian responded with a laugh. “That’s how long it takes for the wind to build up.”

To lean more about the evolution of Cleveland Opera Theater’s production, click here.

Jackson began the program with a recitation of Langston Hughes’ poem “Helen Keller” — the first of five poems by Hughes that served as interludes between each piece on the first half. END_OF_DOCUMENT_TOKEN_TO_BE_REPLACED

Pianos with pins and tape on strings, a bass drum and tam tam, crotales, Almglocken, and vibes. Microphones were hooked up all around the instruments. The feed was sent to speakers around the room. Lighting designer Nicholas Houfek hung incandescent globes over the arrangement of instruments from thin black wires stretching across the beams. END_OF_DOCUMENT_TOKEN_TO_BE_REPLACED

From the podium, Elim Chan set an ambitious tone for the evening. The rising star conductor, here in her Cleveland Orchestra debut, has a commanding style, and every twist and turn in Saturday’s performance tracked closely with her baton. END_OF_DOCUMENT_TOKEN_TO_BE_REPLACED