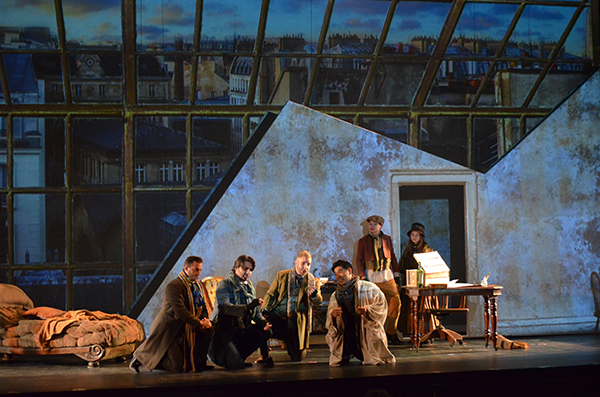 Singing was high-quality throughout the opera. The clear-voiced soprano Eleni Calenos was a sympathetic Mimi opposite the robust tenor Mackenzie Whitney as Rodolfo, who relaxed in his high register as he went along. Angela Mortellaro turned up the heat of her personal charm and vocal warmth as Musetta and enjoyed a closely matched vocal partner in baritone Young-Kwang Yoo as Marcello. And they all looked good in period costumery designed by Glenn Avery Breed and lighted by Steve Shack. 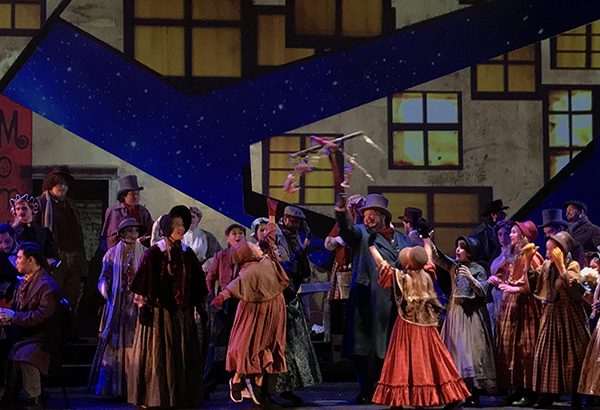 Scott Skiba stages groups and crowds masterfully, and he concocted humorous interchanges between Rodolfo, Marcello, and their fellow Bohemians (John Tibbets as Schaunard, and James Eder as Colline). The second-act Christmas Eve scene outside Café Momus was a riot of organized chaos, enhanced by the belting voices of an excellent children’s chorus (prepared by Jennifer Call) and made even a bit more outrageous by the ladies of Cleveland Burlesque.

Jason Budd was hilarious in his dual role of Benoit the landlord and Alcindoro the beau, in both cases soundly humiliated by the Bohemians. Shaun McGrath, Jonathan Stuckey, and Matthew Mueller filled out the cast as Parpignol the toy vendor, the sergeant, and the customs officer. 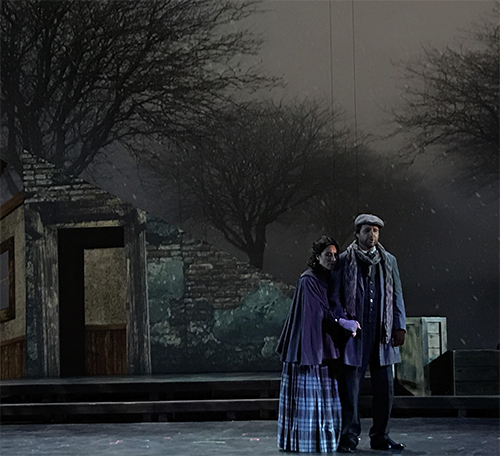 Down below — in a real orchestra pit for a change — conductor Domenico Boyagian drew expressive playing from his 35-member ensemble, and kept a tight rein on the proceedings onstage while giving soloists plenty of room to emote. Offstage choruses were admirably synchronized by assistant conductor Dean Buck.

Beautiful production that this was, a few problems remain with the plot. What happened to sour the relationships of Mimi and Rodolfo and of Musetta and Marcello between Christmas Eve and February? That played itself out during intermission when we weren’t looking. And it seems odd for the main characters to put off splitting up until springtime, when they think that sunshine and flowers might ease the pain. 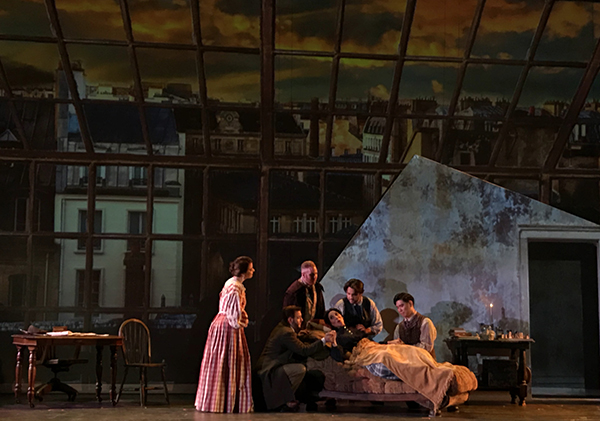 But hey, this is La Bohème, whose music enchants, where Mimi’s Bohemian friends suddenly become selfless and hock earrings and winter coats to buy her medicine, and where Mimi’s deathbed scene always brings tears to the eyes. Never mind the fat lady — this opera’s not over until the consumptive soprano sings.

The music isn’t easy to play, either. Over the course of two hours, all of the musicians brought fantastic focus to the unrelenting tricky rhythms and countless layers of parts, all of which require a high level of individual responsibility. Even in the moments of calm, the accompaniment remains perpetually unsettled. Adams — who made a sprightly presence on the podium — combines minimalist, repeating motives in gradual layers, which eventually become so dense they overwhelm the senses. Lisa Wong deserves special mention for her thorough preparation of the Cleveland Orchestra Chorus, as does Jennifer Rozsa for the Children’s Chorus, which made a brief but memorable appearance in the last few minutes. END_OF_DOCUMENT_TOKEN_TO_BE_REPLACED

Warner was a fitting choice not just symbolically, but also sonically. The combination of Baroque strings, theorbo, harpsichord, and organ created a nice blend and balance, allowing the opportunity for softer instruments to stand out. In Johann Rosenmüller’s Sonata à 5 in g, Doug Balliett’s violone pizzicatos resonated beautifully, and in Johann Heinrich Schmelzer’s Sonata in d, harpsichordist Elliot Figg became an equal player in the texture with his clever improvisations. The slight exception was Joshua Stauffer on theorbo — despite the instrument’s big physical presence on stage, he received little time in the spotlight. END_OF_DOCUMENT_TOKEN_TO_BE_REPLACED