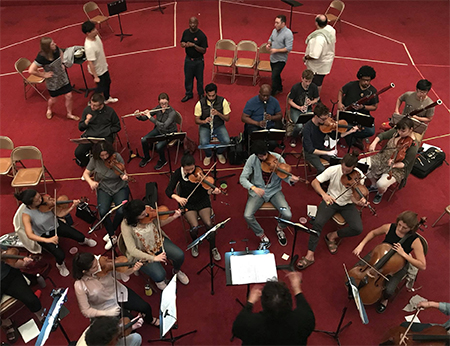 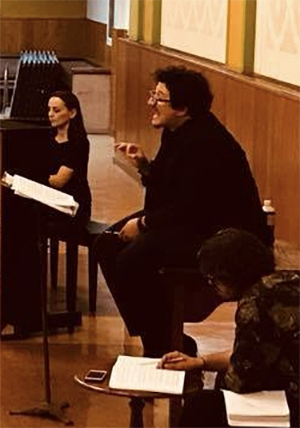 According to the young conductor, it is that style that makes the opera so approachable. “Bel canto is all about the singers. Everything is built so that they can show off their technical abilities, whether it’s singing the fastest notes possible or the longest lines in one breath.”

Italian opera is in Boyagian’s blood. He was born and raised in Bologna, Italy, and is the son of renowned Metropolitan Opera Verdi baritone Garbis Boyagian, whom he credits for inspiring his passion for the art form.

The conductor noted that when Rossini composed opera, he wasn’t picky when it came to recycling music, making cuts, or changing keys. “He would just copy and paste from one opera to another. He didn’t care, but he didn’t care for a good reason, because the point was that he was composing for the singer. He had the mindset of ‘we’re going to perform it in Napoli and no one will hear it in Milano.’”

At the time Rossini’s Barber was premiered in 1816, two other operas based on Beaumarchais’ play had already received their first performances —  one by Giovanni Paisiello in 1782 and another by Nicolas Isouard in 1796. “It was a popular story, but Rossini said that he wanted to write the best one and I think he did.”

Although he finds Rossini’s music to be incredible, Boyagian said that it is a challenge to conduct. “There’s not a lot of proof of what Rossini wanted because of his cutting and pasting.” He added that over time, many bad performance habits have developed as a result of singers performing the arias in recital. “They do whatever they want with them, then they take what they did in a concert and put it into the opera in the same way.” The conductor said that another cause of bad habits is recordings. “People think if it’s on a recording it must be right.”

A second challenge is keeping Rossini’s musical style alive. “It’s light, bubbly, and fast, and the orchestra needs to speak in a very clean way. We finished reading the opera last night. It’s been interesting to see what the players have in their parts — the articulations are all different, and we don’t want that. These little details are part of the entire picture, so you can’t just overlook them.”

There is also the question of tempos: how fast can you go while keeping it playable and singable? “I have my own little tricks,” Boyagian said. “If I cannot say it in my own language, I can’t possibly ask someone to sing it. It’s the same thing for the orchestra: if I cannot double- or triple-tongue it then there’s no point in going that fast. You also have to use some kind of musical instinct that tells you when something is probably a bad idea.”

Because Rossini is all about the singers, Boyagian looks forward to working with the talented cast. “They’re all wonderful and beautiful to watch because you begin to understand what bel canto is all about. This is a little bit shocking to say as a conductor, but during the runs it doesn’t matter what the word is, you just want to watch and hear what is happening. It’s like going to Magic Mountain and you see the rides going up and down — you don’t want to be on them, you just want to see how many turns they make.”

Wrapping things up, I mentioned that we’ve batted the term bel canto around numerous times during our conversation. I asked the Italian conductor how he would define the term for people who might not understand our jargon. After thinking Boyagian said, “It’s beautiful singing attached to very clean, understandable comedy. That’s how I would describe it.” 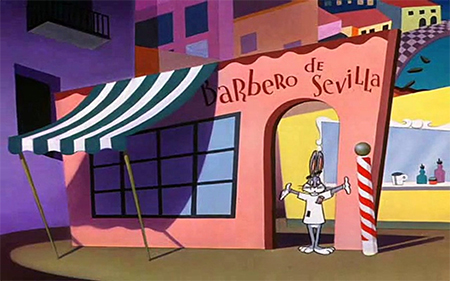 People of a certain age were likely to have been introduced to Rossini’s The Barber of Seville by watching Saturday morning cartoons. Who can forget Bugs Bunny singing the title role in Looney Tunes’ The Rabbit of Seville?