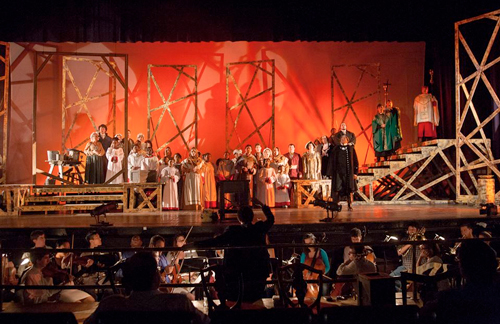 Rebranding is sometimes just a marketing ploy to sell the same old product with a shiny new veneer. But when Opera Per Tutti changed its name to Cleveland Opera Theater last fall, the announcement came with an ambitious set of new plans. On Friday evening, May 8, the new company reached its first milestone with a first-class production of Puccini’s Tosca in COT’s new performing space, the acoustically excellent Masonic Auditorium. 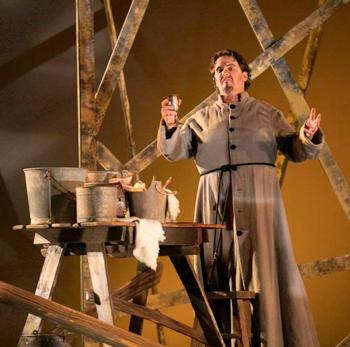 Benjamin Czarnota as the Sacristan

Though COT doesn’t have money to burn at this stage in its ascent, artistic director Scott Skiba staged Tosca just as effectively as companies who can lavish funds on production values. Set designer Richard Fleischmann’s moveable towers of crisscrossed 2×4’s splotched with paint, and impressive sets of stairs suggested the interior of the Church of Sant’Andrea della Valle, Scarpia’s apartments and the rooftop of the Castel Sant’Angelo. Lighting designer Rob Wachala’s expressive gobos and colorful washes — and the audience’s imagination — could fill in the rest. Some elegant, over-sized tables provided a hint of opulence in Act II. 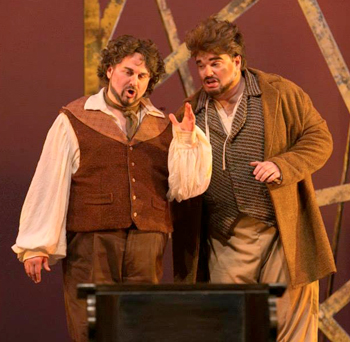 Tim Culver and Robert Pierce as Cavaradossi and Angelotti

Skiba’s stage direction was as effective as it was economical. Cavaradossi’s canvas — the painting of the Madonna with the blue eyes that put the dark-eyed Tosca into a jealous rage — was on the “fourth wall” where we never saw her, but could bring our imaginations to bear. He filled the auditorium’s large stage with attractive arrangements of performers in crowd scenes but found ways to concentrate the audience’s attention when only a pair of singers was involved (Scarpia’s split-level apartment allowed for a variety of possibilities). 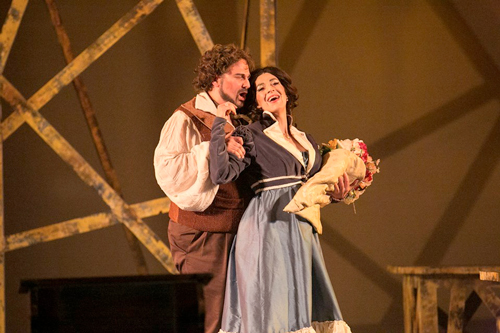 A strong, well-balanced cast populated by many of Northeast Ohio’s finest singers — people who actually live in the region — carried the story with distinction. As Floria Tosca, founder and executive director Andrea Anelli stood up bravely to her all-male competition. If her voice type is more alluring than some would choose for that role, her fiery acting and commanding stage presence sealed the deal. 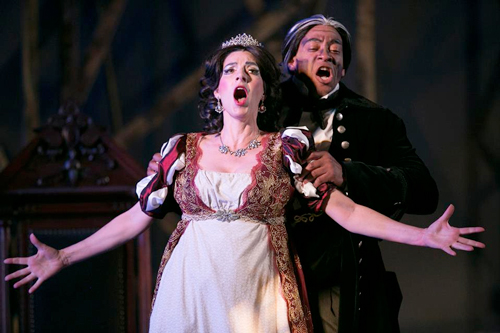 Tenor Tim Culver was splendid as the painter and Tosca’s lover, Mario Cavaradossi, singing with depth of tone even in the lower region of his voice. Though the role of Barone Scarpia is completely out of his normal character, ubiquitous baritone Brian Keith Johnson tapped into his inner villain, playing the chief of police with cool, calculated ruthlessness.

Benjamin Czarnota made a fine, bumbling sacristan, and Robert Pierce gave a resonant, well-acted account of Angelotti, the political prisoner on-the-run. Daniel Doty (Spoletta), De’Ron McDaniel (Sciarrone) and Cy McFarlin (the Jailer) matched their compatriots in vocal and acting prowess. The ensemble and a children’s chorus drawn from the neighboring University of Cleveland Preparatory School (prepared by Timothy Little) were as beautifully costumed in period attire as the leads (costumes by Leah Mulheim). They sang and moved like pros. 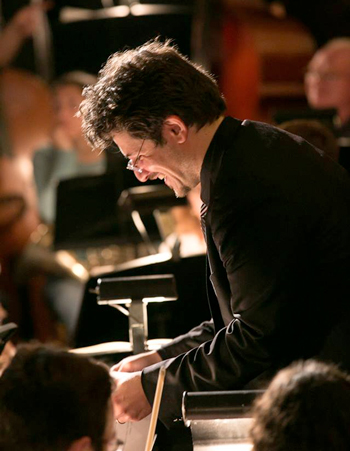 Domenico Boyagian is a born opera conductor. Using economical gestures, he led the cast and an accomplished 34-piece orchestra in an expressive journey through Puccini’s turn-on-a-dime tempo changes and reacted quickly to whatever liberties his onstage colleagues wanted to take with their individual vocal lines. The coordination between stage and pit was nearly flawless. The auditorium’s Wurlitzer organ added an attractive gravitas to the first act “Te Deum.” 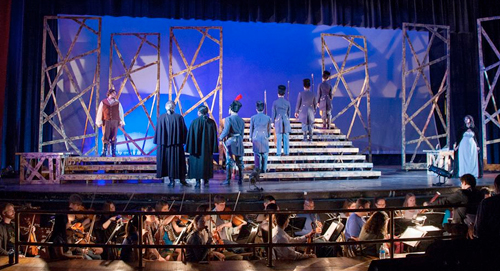 Cavaradossi in front of the firing squad

But what really made this production special was the auditorium itself. The 2,000-seat theater is a big space, but its steeply-raked tiers of seats provide excellent sight lines. Voices project easily into the house, even when the orchestra is playing at full volume. You have to wonder why Cleveland’s other opera organizations haven’t beaten a path to this facility. (It even provides box seats!) 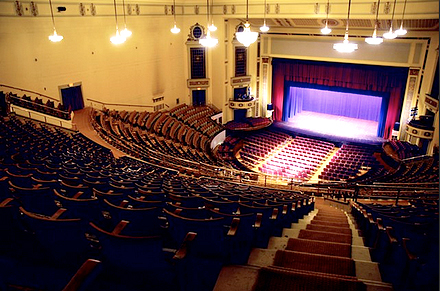 While eagerly waiting to see what Cleveland Opera Theater will take on next, it’s fun to see that the company hasn’t shed its “Opera per Tutti” (“Opera for Everybody”) character. Although the audience wasn’t humming along with the tunes — like the natives do at Rome’s outdoor productions at the Baths of Caracalla — Friday’s performance was definitely democratic and user-friendly. No tuxes or tiaras were in evidence, families seemed comfortable moving about during the show, and the Masons weren’t uptight about letting patrons bring drinks and munchies into the auditorium.