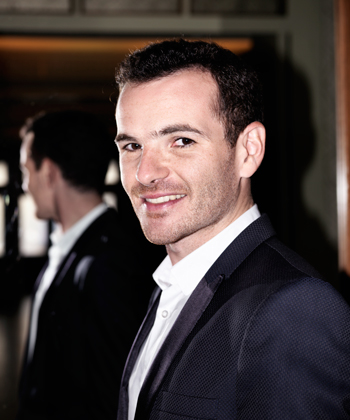 “I’m just so happy to be back with this wonderful orchestra,” French conductor Lionel Bringuier said in a telephone conversation immediately after Tuesday morning’s rehearsal with The Cleveland Orchestra. On Thursday, April 16 at 7:30 pm at Severance Hall, Bringuier will lead the Orchestra in a concert featuring works by Maurice Ravel, Camille Saint-Saëns, and Florent Schmitt. The program will be repeated on Saturday, April 18 at 8:00 pm.

Bringuier is always a joy to talk to, and his enthusiasm for this week’s repertoire came through loud and clear. He said the program is a nice balance between pieces that are almost chamber music on the first half, and large orchestra works on the second half.

The concert will open with Ravel’s Le Tombeau de Couperin. “Ravel is very important to me right now because I am recording the complete cycle of his orchestral works for Deutsche Grammophon with my new orchestra, the Tonhalle Orchestra Zürich. I love to perform his music, so really we could have picked all of Ravel’s orchestral pieces for this program,” Bringuier said with a laugh.

“I conducted Tombeau for the first time when I was assistant in Los Angeles — the management asked me to step in for a conductor who couldn’t make it. That was in 2008, and since then I have conducted it a number of times. One of the reasons I love it is that it really is like chamber music.” I mentioned it’s also close to being an oboe concerto. “Yes it is,” Bringuier agreed, “and Frank Rosenwein is a fantastic oboe player. I really love his playing.”

The evening’s actual concerto, Saint-Saëns’s Cello Concerto No. 1, will reunite Bringuier with his good friend Gautier Capuçon. “I’m very happy that Gautier is going to be the soloist. I’ve known him since I was 13 years old. Gautier was just finishing his degree when I was a student in the cello studio of Philippe Muller at the Paris Conservatoire. Muller would always recommend that we attend Gautier’s lessons because he knew that he would go far in his career. Now I feel so happy every time I get to share the stage with him.”

Bringuier said that he was excited to conduct this program in Cleveland because of the Orchestra’s reputation for their excellent playing of French music. “They always find the right sound, and I immediately felt that again this morning. I was amazed by the first reading of Florent Schmitt’s La Tragédie de Salomé.” Bringuier first encountered the piece as a student in a musical analysis class. “The teacher would spend part of each class playing a piece of music, and we had to figure out who the composer was. One day he played a piece that nobody knew. First we all thought that maybe it was Stravinsky. Then, because we didn’t know the full ballet of Ravel’s Daphnis, we thought it might be part of that because there are many similarities in the writing. That made sense because both Stravinsky and Ravel admired Schmitt.”

In an interesting twist, two weeks later Bringuier attended a concert by L’Orchestre National de Lyon and La Tragédie de Salomé was on the program. “Hearing it live was just amazing, so I started to study the score. I think it is a masterpiece. I also programmed it for my first subscription concert in Los Angeles. It’s a joy for me to bring the piece to Cleveland. I’m always happy to bring not only contemporary music, which I like to perform, but also lesser-known pieces from the last century. I think it’s nice for the orchestra to get to play them and for the audience to get to know them.”

The concert will conclude with Ravel’s Bolero, a work Bringuier said he has loved since he was a child. It also played a role in his formative years as a conductor. “When I was 15 years old, I was asked to conduct Bolero with L’Orchestre de Cannes, a side-by-side performance with kids from all over the region. There were 120 players on stage. Bolero is also a piece I chose for my opening concerts in Zürich. That week we had an open house and 7,000 people came to the hall. As part of the open house we organized a joint concert with the Tonhalle Orchestra and 100 amateurs from around the Zürich region, and Bolero was on that program. So I’ve had the opportunity to conduct it with many different types of orchestras, but it’s always a communicative joy.”

In spite of his busy schedule, Lionel Bringuier makes time for another passion: sports. “I love to run,” he said. “I went for a run yesterday around downtown Cleveland.” He’s also a major tennis buff and is proud of the fact that France currently has seven players ranked in the top 50 in the world. “I actually got to meet Gilles Simone. We’re both from Nice, and during the tournament there we were able to have a very nice conversation. I was also a mentor at the Lawn Tennis Club there two years ago. It was great, because I not only got to talk about tennis, but also a lot about music as well. That was humbling for me, because the following year they asked Novak Djokovic to do it. I love to play, but it’s like everything. If you want to keep your level up you have to practice.”

Does he have a favorite player? “I like the French players very much,” he said, although he does enjoy watching Rafael Nadal and Roger Federer at tournaments. “I’m always amazed at the intense focus they have on any given day. And I do find there are many similarities between the schedules of tennis players and conductors — we’re in one city one week and another city the next.”

Northeast Ohio’s Les Délices has long been that rarest of beasts: a world-class organization so proud of its region (ours) and repertoire (distinct niches in pre-1800 music) that it never tries to be everything to everyone, paradoxically making a strong case for a broad, curious international following. In the December episode of its SalonEra series, the ensemble embraces its strengths and community to marvelous effect. END_OF_DOCUMENT_TOKEN_TO_BE_REPLACED

END_OF_DOCUMENT_TOKEN_TO_BE_REPLACED

Another I remember fondly is Gian Carlo Menotti’s Amahl and the Night Visitors.  Commissioned by NBC, the one act, made-for-television opera, premiered on December 24, 1951, at the network’s studios in New York’s Rockefeller Center. And now, through the wonders of technology, Cleveland Opera Theater has created a magical new production of the work which is available on demand through January 6, 2021 (Three Kings Day). END_OF_DOCUMENT_TOKEN_TO_BE_REPLACED

Jessen has now followed up with her second solo CD, Winter Chapel. Recorded on January 17, 2020 in Oberlin College’s Fairchild Chapel and available on Carrier Records, the album is a continuum in Jessen’s journey to push the musical boundaries of her instrument and herself as an improviser. END_OF_DOCUMENT_TOKEN_TO_BE_REPLACED