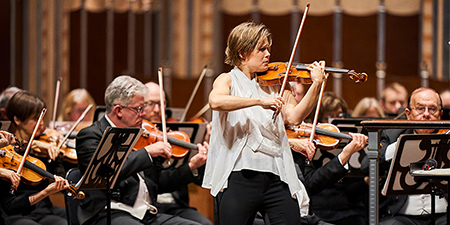 On Thursday, February 8 at 7:30 pm, Josefowicz will return to Severance Hall to join conductor Susanna Mälkki in paying tribute to their mentor and friend Oliver Knussen with a performance of the late composer/conductor’s Violin Concerto. The concert will also include Sibelius’ En Saga and Symphony No. 1. The program will be repeated on Saturday, February 8 at 8:00 pm. Tickets are available online.

During a recent telephone conversation with Leila Josefowicz, I suggested that the combination of soloist, conductor, and orchestra this weekend feels like a dream team. “I agree,” the violinist quickly said. “I wish every date was like this. The Orchestra is unlike any other and Susanna is spectacular. She’s been a dear friend for many years, and our tastes align completely with newer music and what we’re trying to achieve.”

When asked why the artistic partnership with Mälkki clicks, the violinist attributed it to a shared work ethic, a devotion to their craft, and above all, a mutual respect for one another. “We just know each other extremely well. The beauty is that when we collaborate, the tiniest little gesture or movement is understood by the other. That’s such a special thing that can never be taken for granted. There are so many great collaborations in the world. Some of them happen spontaneously, and that can be rewarding and inspiring in an unexpected way, but there are also the great collaborations that come from shared experiences, shared ethics and history, and that’s what Susanna and I have. This is something that I also had with Olly (Knussen), and shared with him for many, many years.”

Josefowicz recalled the first time she met Knussen. “It’s an amusing story,” she said. “I was 20, and I’m 42 now, so that’s how long ago? We were at a dinner, and let’s just say that I’m not a very good self-promoter — I don’t talk about what I do or about my achievements. We started off with ‘Hi, so what do you do?’ ‘I play the violin.’ Then other conversations happened. Then, ‘How long have you played the violin? ‘A lot of years.’ ‘Oh.’ It went on like that until by the end he said ‘I know you.’ It was a very sweet, funny moment that we talked about for years.” 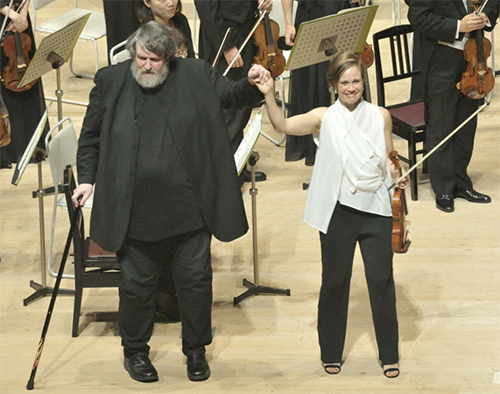 Josefowicz said that at the time of the dinner Knussen was writing his violin concerto for Pinchas Zuckerman. “After that meeting I signed on to learn it, and Olly and I ended up playing it all over the world for the next 15 to 20 years. I performed it 30 times with him, but I’ve also played it many times with Esa-Pekka (Salonen), Susanna, and other conductors, so I would say I’ve played it at least 50 times. It’s a piece that is in my bones.”

When asked about Knussen’s 17-minute, three-movement work, the violinist described it as “challenging” in terms of coordinating the musical gestures. She added that it also has a level of suspense and drama that is “unmatched” in other concertos for the instrument.

Josefowicz said the first movement (Recitative), is full of that suspense — like an acrobat on a tightrope. “There are places that are almost like speech that I try to make very clear. There are also huge outbursts of emotion going on.” She said the second movement (Aria) is tender and nostalgic, and a prime example of how lyrical Knussen’s music can be. The third movement (Gigue), inspired by a clown fiddle player, is both scary and humorous. She pointed out that the thread that brings everything together is a high E harmonic. “It starts and ends the piece, as well as joining the second and third movements.”

Each of the three movements is roughly five-minutes in length. “Olly was not a fan of having things go on too long — he never could sit through an entire opera — so everything is condensed and finely tuned. Every single shading, marking, and note is so meticulous. It’s a cliché, but the piece is like a Fabergé egg, it’s just polished and polished. There was such care involved with everything that he did.”

I asked Josefowicz how she would fill in the blank: Oliver Knussen was ______ . “Astounding. He was astounding in presence, physical and mental. He was a gigantic person, like 6’4” or 6’5” and very large. He had an imposing look, but his personality was so witty. He could be hysterically funny. He had as many variables as his music. He was magical, and one of the most empathetic people that I have ever known, and I miss him every day. He absolutely transformed my entire existence as a musician and as a person.”

Photos: Josefowicz with The Cleveland Orchestra by Roger Mastroianni; Knussen and Josefowicz by Rikimaru Hotta.

The history of classical music sometimes borders on mythology. The music on the Akron Symphony’s Saturday, February 22 program has taken on this fabled, quasi-historical quality — Mozart’s Requiem, Schubert’s “Unfinished” Symphony, and Beethoven’s over-finished Leonore Overture No. 3. Fortunately, in performance the music more than lived up to the story. END_OF_DOCUMENT_TOKEN_TO_BE_REPLACED

Cleveland’s Baroque Orchestra celebrated the Valentine’s Day weekend with four performances of “L’Amore: An Old Italian Valentine.” I heard the second concert on the evening of Valentine’s Day itself at St. Paul’s Episcopal Church in Cleveland Heights. Apollo’s Fire conductor and harpsichordist Jeannette Sorrell greeted the audience with the adage, “Italian is the language of music, of the angels, and of love.” END_OF_DOCUMENT_TOKEN_TO_BE_REPLACED

Every so often, the first seconds of a concert bring neither anxiety over how the rest will go nor twitchy overstimulation, neither boredom nor ecstasy, but a satisfying assurance. Some performances click right away, the musicians’ technique unimpeachable, their artistry and expression powerful, their manner warm but professional. Such concerts hold attention in a special way — the chances of a misstep negligible enough that listening never involves comparison to an abstract standard. In the Phaeton Trio’s recent tour de force in Rocky River, the initial gestures of the performance set a high standard that held throughout. END_OF_DOCUMENT_TOKEN_TO_BE_REPLACED

Musicians love a good metaphor: take, for instance, that of summiting a mountain. When a violinist speaks this way after playing all of Bach’s partitas, or a soprano recalls preparations for a Wagner opera, the image of the artist mounting some hostile peak offers implications of persistence, struggle, and of course triumph. Pianists might describe Beethoven’s sonatas this way. But how many have actually played at the top of a mountain? Archival video confirms that French pianist Pierre Réach literalized this image of the soloist at the summit over twenty years ago. A recent concert in Cleveland confirmed that the figurative Everest of Beethoven’s piano music still bears his banner as well. END_OF_DOCUMENT_TOKEN_TO_BE_REPLACED

The Cleveland Orchestra — or at least half of it — marked Valentine’s Day with a straight-through, 50-minute concert led by Belgian early music guru Philippe Herreweghe. The February 14 performance, marketed as a romantic evening of orchestral classics, played to a packed house (marketing works!). END_OF_DOCUMENT_TOKEN_TO_BE_REPLACED