Concerts cancelled in 2020 may have put a brief gap in Ling’s record with the Orchestra (a program every season since 1984-1985), but the ensemble’s former resident conductor more than made up for it Sunday with a performance both commanding and personal.

The all-Brahms evening opened with soloist Sayaka Shoji’s thoughtful take on the Violin Concerto, but conductor and orchestra weren’t in full force until the second half. Ling led the composer’s Third Symphony, a piece that calls for a close connection among musicians. This is Brahms’ subtlest symphony, and it invites some of the same cherished language — “understated,” “intimate” — that performers reserve for their favorite chamber music. (In fact, chamber music is the standard comparison made with this symphony.) 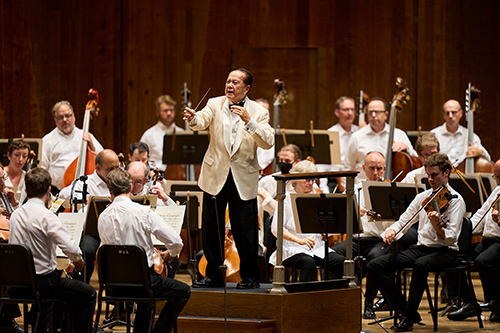 Yet Ling’s interpretation transformed an otherwise unassuming piece into something truly substantial. Horns and trumpets beautifully filled out the three-note motto that starts the first movement and recurs throughout. The brass found an even edgier sound later in the work, making for an intense and adventurous final movement before the symphony dwindled down to its soft closing chords.

The brass shone through even in the piece’s expressive inner movements. Principal horn Nathaniel Silberschlag was a star soloist, from duets across the ensemble (with the oboe, and with the cello section) to the waltz melody alone in the Poco allegretto. Low contrabassoon notes built up the symphonic sound with all the solidity of a tuba. This wasn’t chamber music but big and bold orchestral playing.

There’s nothing small about Brahms’ Violin Concerto either, but Ling and the musicians kept the spotlight on Shoji, here in her Cleveland Orchestra debut. The violinist took up the solo part modestly, not dwelling on high notes and maybe playing a little behind the ensemble sound. But midway through the first movement, Allegro non troppo, she had found her footing, and the cadenza was masterful, a real dialogue for one. 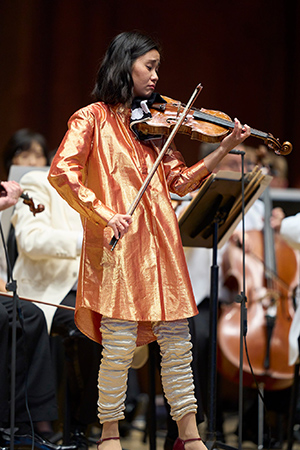 Shoji’s tone continued to bloom in the Adagio, which she imbued with appropriate anguish, complicating a movement that’s sometimes glossed over as straightforwardly beautiful. Brahms’ music is rife with strange dissonances, and these require a certain confidence to pull off. A couple ensemble tuning moments on Sunday bordered on dicey, but the violinist returned everyone to the sureness of the composer’s writing with each new entrance.

Soloist and orchestra were occasionally at odds over the tempo of the third movement, where the upbeat music gets much of its energy from its heaviness. That’s another paradox the composer asks the players to settle, and Shoji, Ling, and the ensemble arrived at the concerto’s final three notes with reassuring power. The Third Symphony would have the evening ending quietly but with no less conviction.