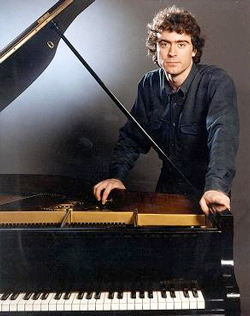 Last Saturday night at Blossom, The Cleveland Orchestra, under French guest conductor Stéphane Denève, presented a lively, varied, and interesting concert of Russian and German music. The evening’s highlight was Robert Schumann’s A Minor Piano Concerto, Op. 56 sensitively performed by talented British pianist Paul Lewis. Successful as a soloist with many of the world’s great orchestras, as a recitalist, and as a recording artist for the Harmonia Mundi label, Lewis tossed off the difficult passagework with the elegant grace obtainable only through major professional experience.

Schumann’s Piano Concerto began its life in 1841 as the single-movement Fantasie, composed for his beloved wife, Clara. After a cool reception, Schumann expanded the work four years later by adding the Intermezzo and linking it without pause to the third movement Rondo. The new version was premiered in 1846, with Clara again as soloist, under the baton of Ferdinand Hiller, Schumann’s composer/conductor friend and colleague.

The concerto’s opening set the tone. After a three-bar syncopated piano flourish, the oboe led the way with an expressive but symmetrical melody supported by woodwinds and horns, and then the soloist answered in kind. This theme returns often. Both Lewis and the principal oboe played beautifully. Immediately thereafter the piano begins its glittery, filigreed sixteenth-notes that support the harmonized tunes in strings and woodwinds.   The charming, modal-sounding sequences that ensue sparkled. Soloist and principal clarinet made similarly exquisite exchanges in the second theme, and Lewis scintillated in the challenging extended cadenza.

The delicate Intermezzo splits its opening theme between soloist and orchestra, continuing the conversational exchange in a more genial tone. The middle section featured lovely interplay between the piano and the gorgeously dark cello section. A short return to the minor mode version of the theme that started the first movement led to a dissolution, dispelled by the sudden explosion into the finale’s lively and rapid triple meter. Here the piano led the way with hemiolas and fresh rhythms. The contrasting theme adds further rhythmic complexities in the form of duple groupings against the prevailing three-four meter. Throughout, the quick interactions between soloist and orchestra continued in a simple yet elegant presentation. These often sequential passages served up a ravishing conclusion.

After intermission the Orchestra and conductor Stéphane Denève delivered a solid performance of Tchaikovsky’s Fourth Symphony. The powerful opening motto in the brass reflects the composer’s personal difficulties with an abortive marriage and his concern with the inexorability of fate. He realized that his homosexuality was an unavoidable part of his nature. The brass section approached perfection in this intense, fanfare-like statement, and the conductor helped to inspire the orchestra to a strikingly vigorous performance.

Highlights of the performance included fine work by the solo clarinet answered by a wonderful high register bassoon; a lovely clarinet-led waltz tune ornamented by short oboe and flute interjections; and a lilting violin passage in thirds accompanied by fateful-sounding timpani. The forceful brass motto returns to conclude the movement.

The histrionic mood of the first movement is quieted as the second movement begins with an enchanting Russian oboe melody. The cellos answer with an inverted restatement that adds further charm, as high woodwinds react with short obbligatos. All the sound and fury of the first movement could not eclipse the second movement’s inspired quiet beauty. A variety of solos take their turns on the melody to round out this plaintively sad movement.

The flashy Scherzo was a delight, though some of the soft pizzicatos were lost in this open-air performance. The Finale, which ensued without pause, seemed to express joy overtaking fate. A innocent, Russian-sounding minor theme periodically relieves the proceedings, which almost approach bombast. The still youthful Tchaikovsky forcefully expresses his personal difficulties and closes the Symphony on a positivistic note.

Stravinsky’s Dumbarton Oaks Concerto (1937) opened the concert. The piece is scored for a small chamber orchestra of fifteen solo players, consisting of flute, clarinet, bassoon, 2 French horns, 3 violins, 3 violas, 2 cellos, and 2 double basses. By this time, the revolutionary experimentation of Stravinsky’s early ballets was over. The concerto is in his neo-Classical style that had culminated in the Symphony of Psalms in the early 1930s.

Like the Schumann Piano Concerto, the shorter Dumbarton Oaks Concerto moves continuously from one movement to the next. The first movement starts like Bach’s Brandenburg Concertos — Baroque concerti grossi, where instrumental soloists play against the full ensemble. The second theme, a rustic fanfare, features the two horns. The performance was effective though rather disjointed.

The second movement moves a playful tune from instrument to instrument against a simple accompaniment. After a short interlude of long-held chords, the original material returns more elaborately and closes with a lovely, intricate flute solo. The third movement finale treats its repetitive theme like that of a Baroque ritornello but is quite complex rhythmically and harmonically. The horns play more fanfare-like material. The effect sounded a bit fragmentary, though Stravinsky’s orchestration sparkled, particularly in the closing ritornello.