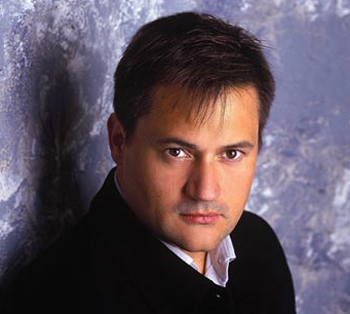 Since launching his career by winning the Metropolitan Opera’s National Council Auditions in 1991, tenor Paul Groves has sung in a dizzying number of operas and logged a long list of concert performances around the world.

Groves returns to Cleveland this week to perform one of his signature roles, the title character in Hector Berlioz’s La Damnation de Faust, a work he performed here in January of 2000 under Christoph von Dohnányi. Willard White, who was also featured in those performances, returns this weekend to recreate the role of Mephistopheles.

We caught up with the Lake Charles, Louisiana native at his hotel in Cleveland on Wednesday afternoon to ask him about his recent activities and his history with the Berlioz piece, in which, as one critic wrote, Groves “delivers the full range of Faust’s character from suicidal depression to ecstatic love” (Classics Today).

Paul Groves: That happens once you’ve been around for a while. Plus, I like to try out a lot of things to see what fits. All these roles weren’t written with one tenor in mind. Composers wrote for a specific person every single time. You never really know what’s going to fit until you try it out.

DH: Over the course of your career, you seem to have moved from lighter to more demanding music, from Mozart early on to Florestan in Fidelio at the Vienna State Opera.

PG: I sang Florestan just a couple of weeks ago, and before that, a whole bunch of Lohengrins for the first time, and that all went well. But it’s nice to be back in French music — it just has its different demands.

DH: When did you take on the Berlioz for the first time?

PG: I sang Faust for the first time in 1999 at the Salzburg Festival in a staged production. I’ve done at least 200 performances since then.

DH: I read an interview where you said that the Berlioz changed your career.

PG: It did. Before that I was mostly considered just a Mozart tenor. I started off singing a little bit heavier repertoire when I was in school at Juilliard and in the Met Young Artist Program. Then James Levine convinced me that I should stick to Mozart and the lighter repertoire for ten years, then I could branch out into other things later on. Being somewhat good at taking advice, and knowing where that advice was coming from, I took it. It turned out to be great advice. So I did Mozart for years, then gradually I moved into some of the French repertoire like Faust and Hoffmann. But the last aria in The Damnation of Faust is at least as heavy as Wagner. When I had success with that, I knew that I was kind of on the right track.

DH: How many of your Faust performances were staged as operas?

PG: I was in four different stage productions — in Salzburg, Los Angeles, Paris and Chicago. All four were completely different, but all very successful. The stage director has to be very imaginative to turn the piece into an opera.

DH: Now that you’ve done both staged and stand-up performances, do you have a preference?

PG: Charles Dutoit definitely believes the Berlioz should never be staged — and I’ve performed it with him and Willard White for years. Dutoit always tells us, “Don’t act! Stop acting!” But in some of the recitativo parts, it’s hard not to act. Of course, even when I do a piece like Das Lied von der Erde, I’m still acting because I’m entertaining the audience by telling a story.

DH: What especially attracts you to the Berlioz?

PG:I love the fantasy parts — the large orchestral pieces that are part of the drama Berlioz was thinking about when he wrote it. Here and there you can hear Mephistopheles entering or exiting and you can just imagine a whole lot of things. Most of the time, it’s more fun to use your imagination. If you read a book and you imagine what the characters and the scenery are going to be, you have it all in your head. Then if they make a movie out of that book you’re always disappointed when you go to see it. I really believe that if we do a concert opera, it can be just as enjoyable as it would be to see it on the stage. We don’t have to see all this extra stuff that we make out to be so important in modern opera. When I go to performances, I want to believe in the characters onstage, but I don’t need all the stuff behind them to really enjoy myself. If a piece is written well by a genius composer like Berlioz, the music does it all for you.

DH: How are the rehearsals going?

PG: The Orchestra is incredible. After I did the Berlioz here in 2000, I came back and did Beethoven’s ninth with Dohnányi. The hall itself is so brilliant and live — it’s like singing in your shower. It’s amazing to know that in a hall like this you can create an atmosphere — it all doesn’t have to be triple forte. Cleveland is an amazing orchestra and Severance is an amazing place to do a concert. It’s one of the greatest halls in the world, just like Carnegie and the Musikverein in Vienna. And it’s fun to reconnect with some of the players. One of the violinists went to Louisiana State University with me and played concertmaster for operas I did at there in early 80s.

DH: Do you get back to Louisiana often these days?

PG: I now live in New Orleans after being in New York for 25 years. I bought a house there, got remarried and thought it would be easier to raise a family in New Orleans. Louisiana people always seem to be drawn to go back home.

DH: No worries about hurricanes?

PG: Now we have hurricanes in both places. It’s not so safe to be in New York anymore after Sandy.

Published on ClevelandClassical.com May 7, 2015.

END_OF_DOCUMENT_TOKEN_TO_BE_REPLACED

The strings-only work by Berg has made relatively frequent appearances on the Orchestra’s programs. In 2021, the musicians recorded it for the In Focus series, and it appeared again on last year’s European tour. Friday’s rendition maintained the group’s characteristic light and effortless playing, each section blending as much as possible to echo the work’s original form as a string quartet. At fifteen minutes total, the piece is quite short, but the dense encoded musical meanings require some extra-attentive listening. Splitting up the three movements ensured that each one could be appreciated on its own. END_OF_DOCUMENT_TOKEN_TO_BE_REPLACED