Electrifying keyboard playing opened and closed Saturday evening’s Cleveland Orchestra concert at Severance Hall (February 21). At the outset, organist Paul Jacobs treated the large audience to an alluring taste of the organ music of Johannes Brahms, plus a thrilling performance of one of Johann Sebastian Bach’s most handsomely-constructed preludes and fugues. At the end, pianist Yefim Bronfman joined Franz Welser-Möst and the Orchestra in a reading of Brahms’s first concerto so magisterial that future pianists probably need not apply.

The console of Severance Hall’s 1931 E.M. Skinner organ was parked front and center for Paul Jacobs’ brief opening set. Jacobs amusingly shucked his jacket before launching into the dramatic, Buxtehude-like opening gesture of Brahms’s Prelude and Fugue in g. Working as he so often did within old forms, Brahms took the structure of a North German Präludium and fleshed his own expressive music onto its bones. Smoothing over a few of Brahms’s awkward moments, Jacobs folded its rhetorical flourishes, cross-rhythms and poignant harmonies into a cogent narrative, playing with an elegance that extended to his efficient hand gestures when changing stops and releasing chords.

The Norton Memorial Organ was built according to a twentieth-century American aesthetic that neither Brahms nor Bach would have imagined, but Paul Jacobs found ways to make this “symphonic” instrument work for the music of both composers. Two small but exquisite selections from Brahms’s late Eleven Chorale Preludes inspired colorful stop selections and combinations (plus a tasteful, single chime note at the end of one of them).

Bach’s Prelude and Fugue in a, BWV 543 is a virtuosic workout for the player. Manual flourishes, pedal solos and wonderful, vigorous counterpoint were all putty in the hands of Jacobs. He found stop combinations that allowed Bach’s complex lines to shine out with compelling transparency, and climaxes — even when bolstered by the plummy reed stops popular in 1931 — were remarkably thrilling. Most people only encounter organs in churches and synagogues, and the playing is often unremarkable. It was a fine thing to hear a world-class artist like Paul Jacobs performing in the context of an orchestral program in such a venue as Severance Hall.

Brahms’s Tragic Overture was heard at the mid-point of four concerts last weekend. On Saturday evening, the piece sounded more high-strung than on Thursday, its climaxes goaded perhaps a bit beyond its natural scale, but vividly played, with abundant drama. 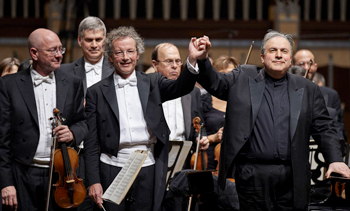 The first piano concerto gave Brahms no end of difficulty. Even after a five-year gestation, during which the composer transformed the original inspiration from symphony to piano concerto, the piece could still use some judicious renovation or savvy editing. Even with its flaws, the d-minor concerto is now firmly established in the canon and continues to dare performers to find solutions to its challenges.

Yefim Bronfman is just the man to do that. Seated stoically at the keyboard during the long orchestral exposition, he seemed to be mustering strength for what lay ahead. His first lyrical entrance gave little hint about the tumult to come, but once his playing exploded, Bronfman was invincible, standing up to Brahms’s full orchestral textures with strength and colorful power. Some might prefer that Bronfman play Brahms with more romantic nuance, but here, his approach seemed perfect. Why paint the lily?

After that enormously spun-out first movement, which takes up half the pages in the score, the chorale-like calm of the second provides a welcome respite both for the listeners and the soloist. Here, Bronfman relaxed into beautifully-voiced, lyrical chords and elegant filigree before attacking the finale in a new burst of energy.

Displaying the same winning qualities he demonstrated in the second concerto on Thursday — among them, the ability to play big without becoming overbearing, and to produce a warm, colorful sound even at moments of technical extremity, Bronfman brought the concerto home with unflagging energy, nailing the chords at the top of arpeggios with perfect accuracy. The cameras were back on Saturday evening to capture this performance for posterity.

Concert photo by Roger Mastroianni, courtesy of The Cleveland Orchestra.

END_OF_DOCUMENT_TOKEN_TO_BE_REPLACED

What was that strange din coming over the live feed from Ludwig Recital Hall on Friday evening, July 23, as the Miami String Quartet filed onstage to play the third faculty recital of the Kent Blossom Music Festival? Accustomed as we were during the pandemic ban on live audiences to hearing the sound of no hands clapping, it was both startling and thrilling to witness a large crowd putting their hands together to welcome one of the Festival’s perennial favorites back for an in-person performance. END_OF_DOCUMENT_TOKEN_TO_BE_REPLACED

Practical reasons aside, there aren’t many ensembles who can put together an all-Mozart evening as elegantly as The Cleveland Orchestra. END_OF_DOCUMENT_TOKEN_TO_BE_REPLACED