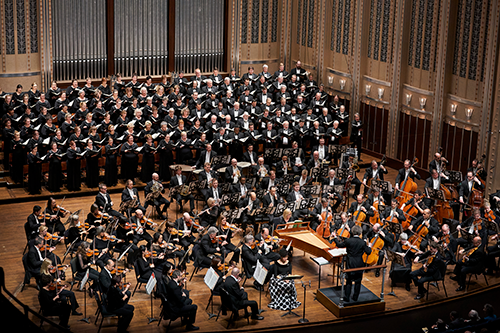 Joseph Haydn’s two great oratorios, The Creation and The Seasons, came along late in his life after the composer had visited London and was impressed by Handel’s large dramatic works for chorus and orchestra. After bravely performing a stripped-down version of The Seasons on Thursday — two of the soloists were ailing — Franz Welser-Möst led The Cleveland Orchestra and Chorus in an enthralling performance of the complete oratorio on Saturday evening. Tenor Maximilian Schmitt had recovered, though the baritone soloist, himself replacing another singer due to illness, had not. Thus Alexander Dobson stepped in to join Schmitt and soprano Golda Schultz on Saturday in a performance distinguished by its three soloists, but made absolutely jaw-dropping by the chameleonic Cleveland Orchestra Chorus.

Prepared by acting director Lisa Wong, the COC took on many roles during Haydn’s progressive tour of the seasons. They heralded the coming of spring with a thanksgiving hymn. They hailed the rising of the sun and sounded the warning of a thunderstorm. They sang a hymn to human toil during the harvest. They narrated an eventful hunt, sang a lusty ode to wine (“Heida, heida, heida, downa, downa, down”), joined in a haunting spinning song, and commented on a humorous fireside tale. Finally, at the end of the Winter section, they painted a vision of the gates of heaven that made it clear that Haydn thought of the four seasons as metaphor for the cycle of human life. And they sounded terrific — well-blended, strong, and sonorous.

Schultz’s radiant personality added extra gloss to the fine sheen of her singing. Schmitt was as golden-tongued and effortless a narrator in Baron Gottfried van Swieten’s libretto as he had been last year in Bach’s St. John Passion. Dobson’s German declamation was superb, and his singing assured — especially without benefit of an orchestral rehearsal. 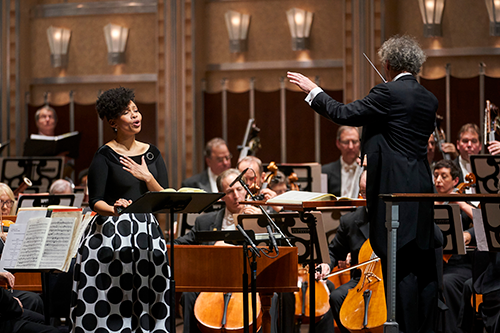 The orchestra has a lot to do with setting the scene for Haydn’s seasonal pictures, first through the evocative preludes to each of the four parts. The first, depicting the passage from winter to spring, is every bit as stunning as the composer’s representation of chaos dispersed by the introduction of light in The Creation. And Haydn’s sunrise and thunderstorm can easily stand up to Ravel’s and Beethoven’s.

Add to that the little invocations of creatures, whistling farmers (the theme from the “Surprise” Symphony), and the bird shot out of the sky. The Cleveland Orchestra rose to the occasion in every instance. The horn section used its outdoor voices to hair-raising effect in the hunting chorus. And on the narrative side of things, fortepianist Joela Jones and cellist Mark Kosower provided stylish recitativo accompaniments.

The large audience generated its own thunder at the end in a powerful ovation that brought the soloists back several times and crescendoed to a climax when Welser-Möst acknowledged the Chorus. The Orchestra and Chorus will take The Seasons to Carnegie Hall in New York this week, and barring any further brushes with illness, they should make a remarkable impression.

Photos of the Thursday performance by Roger Mastroianni, courtesy of The Cleveland Orchestra.

We begin with the world premiere recording of Okeanos, Bernd Richard Deutsch’s concerto for organ and orchestra, featuring Paul Jacobs as soloist. The title refers not only to the Titan of Greek mythology, but also “to an idea of immense (and sometimes unfathomable) greatness and breadth, which conjures up in my mind the thought of the organ,” as Deutsch writes in his notes. END_OF_DOCUMENT_TOKEN_TO_BE_REPLACED

If you haven’t already warmed up to French Baroque clavecin music, Chicago-based keyboardist Jory Vinikour’s L’Unique: Harpsichord Music of François Couperin should make a strong impression on your musical tastes. The most prominent member of a musical dynasty second only to the German Bachs, François Couperin left a large treasure trove of keyboard works, 234 in all, arranged in 24 suites or Ordres.  END_OF_DOCUMENT_TOKEN_TO_BE_REPLACED

After weeks of watching online streams of archived concerts and ad hoc performances from quarantined musicians’ living rooms and bedrooms, it was thrilling to be able to advertise, preview, and report on two real-time webcasts last Friday and Saturday that embraced high production values and addressed the persistent issue of how to compensate musicians for online services. Saturday afternoon’s joint recital by Colin Davin and Jason Vieaux was sponsored by the Cleveland International Classical Guitar Festival, whose 2020 iteration, scheduled for that weekend at the Cleveland Institute of Music, vanished in the wake of the pandemic. END_OF_DOCUMENT_TOKEN_TO_BE_REPLACED