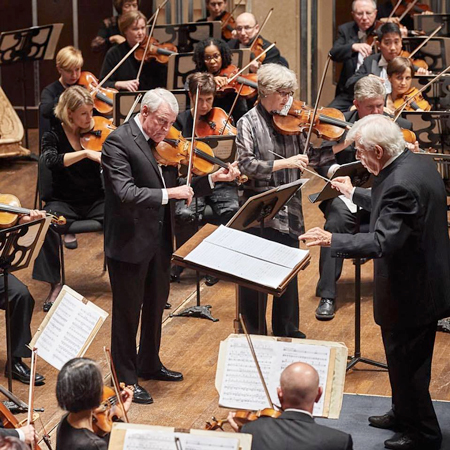 Nostalgia was much in evidence at Severance Hall on Thursday evening, November 19. Music director laureate Christoph von Dohnányi, who conducted The Cleveland Orchestra from 1984-2002, made his annual return visit to the podium, obviously drawing a large audience of fans. Additionally, the premiere of Richard Sortomme’s Concerto for Two Violas on Themes from Smetana’s “From My Life” String Quartet served as a fond recollection of the composer’s long friendship with its dedicatee, principal viola Robert Vernon, who is scheduled to retire at the end of the Blossom season in 2016.

The richly-scored concerto, its solo parts performed by Vernon and his stand-mate, first assistant principal viola Lynne Ramsey, got everybody in The Cleveland Orchestra into the act — revealing that the piece is in its essence not so much a concerto spotlighting two soloists as it is a celebration of a whole orchestral family in which two violas assume a prominent role. On top of a full string section, Sortomme calls for triple winds, full brass, enough percussion to keep five players busy, plus harp, piano, and even an accordion.

For an additional dose of nostalgia, Sortomme’s piece draws heavily on themes from Smetana’s first string quartet, a piece that George Szell arranged for The Cleveland Orchestra and included on his first set of Cleveland concerts in 1944. That quartet also figured memorably in the lives of two young violinists who studied it with Cleveland Orchestra concertmaster Joseph Gingold at the Meadowmount summer school in the Adirondacks. One of those teenagers was Richard Sortomme, the other Robert Vernon, who started out as a violinist before later switching to the viola.

The concerto unfolds in two long movements, each divided into a number of distinct episodes separated by silence. Sortomme’s keen ear for orchestral color reveals itself from the beginning, when a dramatic gesture leaves a clarinet note floating high in the air above low brass and piano. The violas enter rather solemnly, then the interruption of a snare drum introduces a sweeter episode for the viola duo and a return to the opening idea. A horn solo and licks from the mallets department are suddenly punctuated by castanets. Oozy trombones (a reference to Smetana’s drunken sailors in the quartet) take the lead, and the first movement ends with a sudden lick of music. 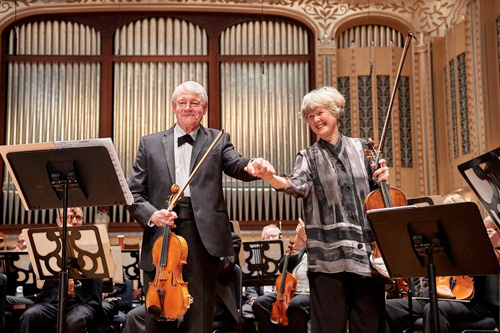 A poignant first viola solo opens the second movement, answered by the second soloist. Clear quotations from Smetana’s quartet thread their way in and out of the texture, once again interrupted by the percussion section — this time in a kind of Smetana-inspired Polka with tomtoms and mallets. The initial viola duet returns, answered by a lovely section for divided string orchestra and a brief but luscious English horn solo (played by guest Robin Driscoll) itself joined by slightly out-of-phase comments from the mallets. A strangely textured episode morphs into a craggy, rhythmic figure passed through the whole ensemble amid more references to tunes from Smetana’s quartet.

The viola soloists play another sweet passage together, joined by solo violin, then things heat up and move forward in the orchestra once again. The accordion adds its unmistakable timbre (played by Joela Jones, who was at the piano in the first movement), the viola soloists play an intense valedictory duet, and the work ends with increasingly smaller fragments of the opening theme passed back and forth between soloists and orchestra.

Sortomme noted in his lengthy composer notes that his main difficulty was toeing the line between “doing justice to Smetana with nods to his melodies and rhythms” — while not getting to close to quoting them — and writing a piece that was “too abstruse.” Whether he succeeded in that would take another listen or two to really judge. What’s clear on first hearing is that the concerto is well-written, expertly scored, and certainly fun to listen to. Robert Vernon and Lynne Ramsey played it with presence and beautiful tone, though the heaviness of its scoring sometimes obscured what they were actually playing. 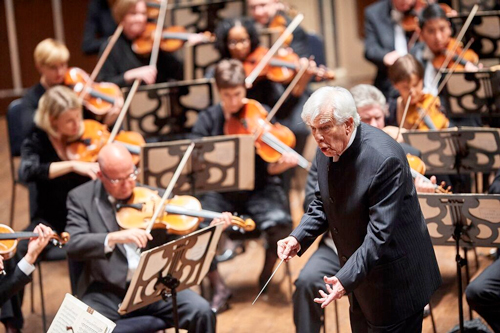 Christoph von Dohnányi celebrated his return to Severance Hall by rearranging the orchestral furniture — cellos and basses were seated next to the first violins, with violas and second violins to his right. This return to the setup he used during his tenure apparently unsettled the players during Smetana’s overture to The Bartered Bride. They played with uncommon caution, and no wonder — the reseating must have made it difficult for the strings to hear each other as the overture’s skittering fugue passed through the sections.

There was nothing at all tentative about Franz Schubert’s ninth symphony, which ended the evening. Here, the orchestra sounded glowingly robust as the strings surged from wave to wave of glorious sound in the opening movement, and the winds contributed pristine, blended colors to the textures with unflagging stamina throughout the long symphony. The orchestra probably could have played this piece without any help from the podium, but Dohnányi’s obvious joy in shaping and caressing its many alluring details was inspiring to watch. 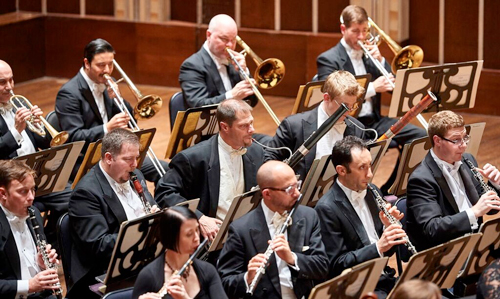 Jackson began the program with a recitation of Langston Hughes’ poem “Helen Keller” — the first of five poems by Hughes that served as interludes between each piece on the first half. END_OF_DOCUMENT_TOKEN_TO_BE_REPLACED

Pianos with pins and tape on strings, a bass drum and tam tam, crotales, Almglocken, and vibes. Microphones were hooked up all around the instruments. The feed was sent to speakers around the room. Lighting designer Nicholas Houfek hung incandescent globes over the arrangement of instruments from thin black wires stretching across the beams. END_OF_DOCUMENT_TOKEN_TO_BE_REPLACED

From the podium, Elim Chan set an ambitious tone for the evening. The rising star conductor, here in her Cleveland Orchestra debut, has a commanding style, and every twist and turn in Saturday’s performance tracked closely with her baton. END_OF_DOCUMENT_TOKEN_TO_BE_REPLACED