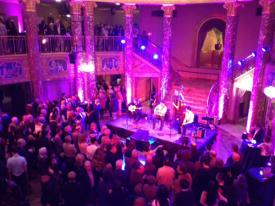 Through innovative program initiatives and outreach efforts, the Orchestra is now bringing together Clevelanders of all ages in Severance Hall, its architectural gem in the interactive arts mecca that University Circle has become. Thanks to the Frequent Fan Card, Student Advantage, and Young Professionals Circle programs, the attendance of younger audience members has skyrocketed.

The Fridays@7 series embodies these recent developments and is undoubtedly a measure of their success. “The Fridays@7 concerts target a younger, more hip audience and are played without intermission,” wrote TCO associate principal cello Richard Weiss in an email.

The pre-concert “starter” begins at 6:00 pm in Reinberger Chamber Hall. The October 10 show highlighted Haddad along with accordion virtuoso Julien Labro and harmonica legend Howard Levy performing together in a unique musical collaboration.

Describing the diversity of orchestral programming that followed, Weiss said that the concert “featured Lang Lang in a partial repeat of our Thursday concert, minus intermission and the Chopin [Andante Spianato & Grand Polonaise Brillante]. Franz [Weiser-Most] chose to include the very new and evocative [world premiere commission] Idyll by Matthias Pintscher.” Weiss also noted that “the 5-minute solo piano interlude within Idyll, played by Joela Jones, was written before the whole orchestral piece to memorialize a beloved 89-year old woman who had been a mentor and supporter of Pintscher. It started and ended on a single E flat.”

The concert next highlighted world-renowned pianist Lang Lang performing Richard Strauss’s Burleske, which contains a delightful blend of sprightly virtuosity and ballade-like melodies reminiscent of the Rachmaninoff concerti. As one would expect of this “classical rock star,” Lang Lang executed the demanding work with stunning artistry, showmanship, and ease.

(As an aside, Weiss mentioned in his email a detail of Friday’s concert that could only have been seen from the front of the cello section: “Lang Lang’s very expensive Nike athletic concert shoes had shiny patent tips, the Nike Swoosh logo, and the words “Love Love” in red script letters.”)

The orchestra concluded its part of the Fridays@7 program with Strauss’s crowd-pleasing standard, Till Eulenspiegel’s Merry Pranks, which received an enthusiastic standing ovation.

On exiting the concert hall, the audience could immediately hear the jazz music of Hot Club of Detroit floating up from the Grand Foyer in the orchestra level lobby.

Featuring songs from their 2012 album, Junction, Hot Club of Detroit provided an upbeat and jiving post-concert “afterparty.” The Grand Foyer took on the atmosphere of a swanky jazz club as concert-goers of all ages gathered on the main floor and leaned over the spiraling railings of the Dress Circle Lobby, swinging to the beat. The multi-colored lights casting down on the band captured the spirit of the vibrant music.

The group is a self-proclaimed “gypsy jazz” ensemble, a genre inspired by the music of Jean “Django” Reinhardt, who started his own Quintette du Hot Club de France with Stéphane Grappelli in the 1930s. Hot Club of Detroit reverently draws influence from these legends as a springboard for their own fresh, vivacious ideas. The band featured each member in an entirely creative way, often turning the stereotypical roles of the instruments on their heads and interweaving cleverly colorful quotes into their songs.

Nearing the end of the set, Julien Labro’s accordion solo was so impressively stunning and that one could not help but momentarily stop grooving to the music in order to listen in captivation. Earlier, Howard Levy joined them on the stage, fitting seamlessly into the group with harmonica notes flying so fluidly that they sounded like those of a virtuoso violinist.

An alternate post-concert performance featured singer-songwriter Luca Mundaca performing her set in the Severance Restaurant, which is now open regularly after each Thursday, Friday and Saturday concert. Richard Weiss summed up the programming concept of Fridays@7: “The idea is to promote social interaction in a club atmosphere which is theoretically attractive to younger audiences. We hope it is working!”

Jackson began the program with a recitation of Langston Hughes’ poem “Helen Keller” — the first of five poems by Hughes that served as interludes between each piece on the first half. END_OF_DOCUMENT_TOKEN_TO_BE_REPLACED

Pianos with pins and tape on strings, a bass drum and tam tam, crotales, Almglocken, and vibes. Microphones were hooked up all around the instruments. The feed was sent to speakers around the room. Lighting designer Nicholas Houfek hung incandescent globes over the arrangement of instruments from thin black wires stretching across the beams. END_OF_DOCUMENT_TOKEN_TO_BE_REPLACED

From the podium, Elim Chan set an ambitious tone for the evening. The rising star conductor, here in her Cleveland Orchestra debut, has a commanding style, and every twist and turn in Saturday’s performance tracked closely with her baton. END_OF_DOCUMENT_TOKEN_TO_BE_REPLACED