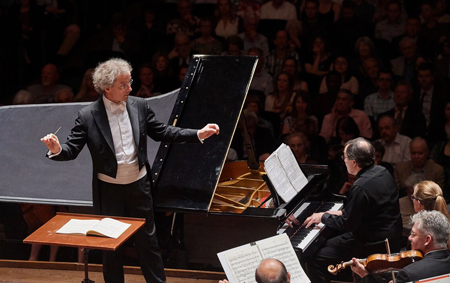 Thursday evening’s Cleveland Orchestra program at Severance Hall cozied two ear-stretching modern works by Anthony Cheung and György Ligeti between a pair of Haydn Symphonies — No. 39 from the composer’s “Storm and Stress” period, and No. 96 from his late, mature period.

Even those Symphonies were new to Severance Hall audiences in their own way. No. 39 was played by the Orchestra only once, 25 years ago, and No. 96 only on a few occasions, the last in 2011. On Thursday, Music Director Franz Welser-Möst led warm, vibrant performances of both works.

At the top of the concert, a persistent motif and surprising grand pauses marked the opening of No. 39. Four horns gave extra warmth to the texture throughout, and the winds sounded alluring in the trio of the Minuet. Striking dialogues between winds and strings and dazzling fiddle runs brought the short work to an engaging conclusion.

At the other end of the evening, No. 96 represented more well-aged Haydn, but was no less surprising in its details. Welser-Möst led a reading both majestic and suave. Highlights included the trilling cadenza for oboe, flute, and bassoon in the second movement, a grand minuet with an expressive oboe solo in its trio (Frank Rosenwein), and a concluding rondo with an urgent theme.

Just getting through the thicket of notes in György Ligeti’s Piano Concerto would be a feat for any pianist, but Pierre-Laurent Aimard went half a league farther, making his performance of this five-movement work a partnership with the Orchestra that was eminently musical, jaw-droppingly virtuosic, and leavened with dry humor.

The subtle rhythmic precision of the first movement leads to wonderfully strange colors in the second — solo double bass, piccolo in its lowest range, and bassoon in its highest, soon joined by woozy pitches from the slide whistle. As the Concerto went on, rude interjections from trumpet, horns, percussion, and high woodwinds never interrupted the pianistic calm. The piece ended with a remarkable conversation between piano and xylophone.

Aimard, Welser-Möst, and the Orchestra were the picture of calm in the face of every challenge Ligeti threw at them. The impressed audience brought Aimard back several times, and finally for an encore. “Let’s hear what Ligeti sounds like without the Orchestra,” he said, launching into an equally brilliant reading of Etude No. 10, The Sorcerer’s Apprentice, a piece the composer dedicated to Aimard. 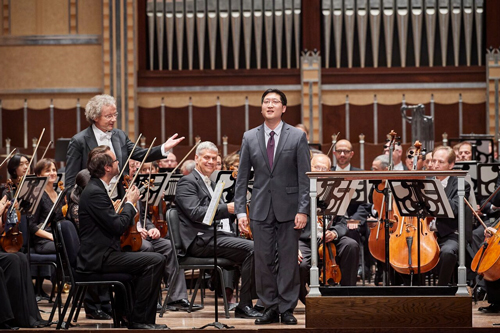 After intermission came the second work Anthony Cheung has written during his Daniel R. Lewis Young Composer Fellowship with The Cleveland Orchestra. The intellectual genesis of Topos or “Topics” is fully as complex as its eventual orchestration for a huge ensemble with triple winds and an army of percussion including wind machine and thunder sheet. And six instruments — flute, oboe, clarinet, bassoon, harp, and piano — are tuned a quarter-tone lower than normal.

In addition to his fascination with microtonality, Cheung is interested in “semiotics” and “topic theory” (on the one hand, the fluidity of meaning that representational tropes like horn calls can engender in a listener, on the other, the idea that there is no such thing as absolute music: everything signifies something). And as a representative of his musical generation, Cheung is also excited about sampling bits of music from the works of other composers and inserting them in his own works for symbolic effect.

As one movement flowed into the next amid dense, complex textures, it became gradually clearer that the composer had taken on his huge topic using musical components that didn’t always come through in performance — like the detuned instruments.

There’s much interesting writing in this 20-minute work that could be distilled into an effective overture half its length, perhaps with quotations from other composers that are more subliminal.

END_OF_DOCUMENT_TOKEN_TO_BE_REPLACED

Composer John Harbison has done it all. His numerous awards include a MacArthur Fellowship and a Pulitzer Prize. He has written works for many of America’s leading musical organizations and has served as composer in residence with the Pittsburgh Symphony and the Los Angeles Philharmonic. His catalogue includes three operas, seven symphonies, twelve concerti, a ballet, six string quartets, numerous chamber works, and a large body of sacred music. On her latest CD, Late Air — Music by John Harbison, soprano and Oberlin voice professor Kendra Colton reminds us that the celebrated composer has a special talent for writing art songs — she also proves herself to be a sensitive interpreter of them. END_OF_DOCUMENT_TOKEN_TO_BE_REPLACED

END_OF_DOCUMENT_TOKEN_TO_BE_REPLACED

We begin with the world premiere recording of Okeanos, Bernd Richard Deutsch’s concerto for organ and orchestra, featuring Paul Jacobs as soloist. The title refers not only to the Titan of Greek mythology, but also “to an idea of immense (and sometimes unfathomable) greatness and breadth, which conjures up in my mind the thought of the organ,” as Deutsch writes in his notes. END_OF_DOCUMENT_TOKEN_TO_BE_REPLACED