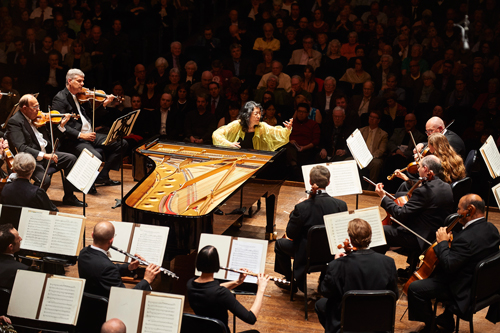 Almost a year to the day since her last appearance at Severance Hall with The Cleveland Orchestra, Mitsuko Uchida returned last weekend to lead and solo in two Mozart piano concertos, revisiting selected works she had performed during her complete Mozart cycle here between 2002 and 2007. As they did last year, a large audience of her Cleveland fans turned out to hear her and to enjoy a Mozart symphony led from the concertmaster’s chair by William Preucil.

On April 9, Thursday evening’s short program featured the second piano concerto Wolfgang Amadè Mozart ever wrote, as well as the next-to-last of his achievements in that genre. The concertos numberered 1-4 were merely arrangements of other composer’s works. Concerto No. 6 in B-flat dates from January of 1776. At the time, Mozart was a 20-year-old living in Salzburg (and, to put things in context, a little upstart nation in the New World was just getting itself organized to sever its ties with Great Britain). The Concerto in D, No. 26, was written twelve years later, perhaps for a series of Viennese concerts that Mozart contemplated but which never materialized. Together, the works mark the beginning and the denouement of Mozart’s career as a composer-pianist.

Amazingly enough, the earlier of the two concertos already has Mozart’s musical fingerprints all over it, even if it’s less symphonic in its wind writing than the later work and perhaps not quite so formally confident as Mozart’s more mature compositions became. The Cleveland Orchestra had performed No. 6 only once before — in that earlier cycle by Uchida — while No. 26 was first played in Severance Hall in 1950 under George Szell with Robert Casadesus at the keyboard.

As always, Mitsuko Uchida’s playing was fluent, lucid and reverent — perhaps a bit too respectful of Mozart to let the prankster side of the composer’s personality come out. This time around, Uchida occasionally ventured into a more aggressive style which provided some welcome contrast. Wearing a diaphanous shawl whose color seemed perfectly in tune with the burgeoning forsythia bushes in University Circle, she made expressive gestures toward the players when not addressing the keyboard. Whether the musicians were following her or taking cues from the concertmaster (who gave plenty of them) was up for debate. 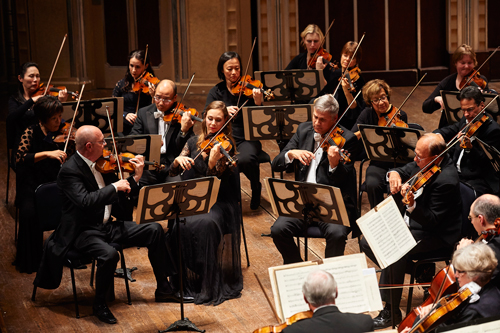 Between the two concertos, William Preucil led a handsome reading of Mozart’s Symphony No. 34, a three-movement, minuet-less work composed in Salzburg in 1780. The orchestra, reduced but with all its principal players present, played like a very large chamber ensemble, taking tiny cues from Preucil but operating like an organism with many limbs but a single brain. The Orchestra was impressive: only in a few tiny moments was the playing less than laser-sharp.

Was the interpretation as nuanced as it might have been with a conductor at the helm? Maybe not, but that takes nothing away from what The Cleveland Orchestra can do all on its own. That kind of orchestral autopilot works best for music like Mozart’s that flows forward with direction and purpose, but the musicians also pointed up surprises and special moments on Thursday evening.

Bianca Ciubancan (16, Chicago, Ill) began the afternoon session with Jessie Montgomery’s Rhapsody No. 1 for solo violin. Playing with a warm, rich sound, Ciubancan brought a thoughtful, intimate approach to the work, highlighting each of its distinct episodes. END_OF_DOCUMENT_TOKEN_TO_BE_REPLACED

END_OF_DOCUMENT_TOKEN_TO_BE_REPLACED

Franz Schmidt’s Symphony No. 4 showcased the ensemble, under guest conductor Jonathan Berman, in the standard conventions of a not-so-standard piece. But at the start of the program, the musicians were equal partners to pianist Cédric Tiberghien, whose playing could be as bold as the full orchestra or as intimate as any instrumental solo. END_OF_DOCUMENT_TOKEN_TO_BE_REPLACED