What a week at Severance Hall! On Tuesday, September 26, The Cleveland Orchestra’s revival of Leoš Janáček’s opera The Cunning Little Vixen received its third and final performance, and two days later, Franz Welser-Möst returned to the podium to lead the Orchestra in a spellbinding performance of Stravinsky’s The Rite of Spring.

This pairing of events provided a festive curtain-raiser for the Orchestra’s 100th Anniversary Season, but the performances also allowed the ensemble to put the finishing touches on two important works it’s packing for its forthcoming European tour.

The clever multimedia, made-for-Cleveland production of Janáček’s opera, designed by Yuval Sharon, was first seen and heard in May of 2014 in Severance Hall (reviewed by this writer for Classical Voice North America). Miraculously, almost all the participants were available for the revival, whose diverse elements were, if anything, even more tightly integrated this time around.

Inspired by Czech newspaper cartoons by Stanislav Lolek, with texts by Rudolf Těsnohlídek, Vixen inhabits a world where the border between human and animal consciousness is permeable and ambiguities between reality and imagination remain unresolved. Animals sometimes appear as animations, and at other times are portrayed by masked singers poking their heads through portholes in the projection screen or actually appearing onstage.

Although there are some Hollywoodish gestures in the animations (the intrusive blue dragonfly among them), there’s plenty of barnyard humor and folksy asides that would never have made it past Disney’s censors. 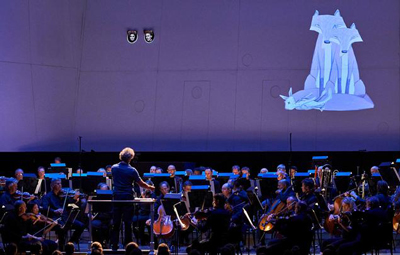 The splendid soprano Martina Janková returned as the Vixen (“Sharp-Ears”), once again pairing wonderfully with mezzo-soprano Jennifer Johnson Cano as her romantic partner, the fox. Other returnees — Alan Held as the Forester, bass-baritone Dashon Burton as the Badger and Parson, and tenor David Cangelosi as the mosquito and Schoolmaster — brought vocal prowess and authoritative stage presence to their sometimes curiously double-cast roles.

And once again, the Cleveland Orchestra Chamber Chorus and Children’s Chorus, deployed in the front rows of the house or at the sides of the Dress Circle, babbled their way expertly through some difficult Czech texts in their roles as hens and voices of the forest.

Although fully visible on stage, The Cleveland Orchestra necessarily took second place to the eye-catching projections and animations, but were anything but subordinate to the aural impact of the production. Welser-Möst led a pristine performance of Janáček’s forest-evoking score that received a wild ovation from Tuesday’s audience. 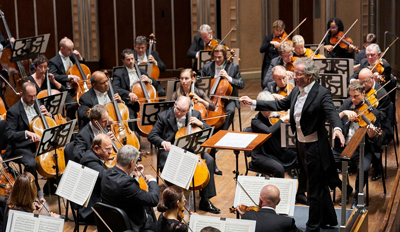 On Thursday, September 28, Welser-Möst began the evening with Beethoven’s Quartet in a, Op. 132 in an adaptation for full string orchestra — essentially the original score with some of the cello line doubled by the basses, who were deployed at the rear of the ensemble.

The famous “Heilige Dankgesang” movement — inserted by a grateful composer to celebrate his recovery from a life-threatening intestinal ailment — worked beautifully with a full body of strings. But while the other movements gained tonal opulence, they also lost some of the focused intensity that a string quartet can achieve. It’s a bit like Samuel Barber’s Adagio for Strings, which we most frequently hear played by massed strings — it’s glorious in that format, though it can become even more ardent in its original quartet form.

But The Cleveland Orchestra’s performance was impressive, validating the truism that this orchestra plays like a giant chamber ensemble. Only occasionally when ornate single lines burst out of the fabric did the violins produce less-than-perfect unisons. Concertmaster William Preucil’s cadenza ably served to link the fourth movement march to the finale.

After intermission and the injection of a large body of wind, brass, and percussion players came Igor Stravinsky’s The Rite of Spring, last performed by the Orchestra at Blossom in 2013 with a reconstruction of its 1913 choreography danced by the Joffrey Ballet. So vivid was the Orchestra’s solo performance of this score on Tuesday that dancers were hardly needed to bring the piece fully to life.

Welser-Möst allowed tension to gather gradually from John Clouser’s exotic opening bassoon solo to the first of the dance movements, then unleashed a thrilling succession of sharp-edged musical events that attended the Augurs of Spring, the Ritual of Abduction, the Spring Rounds, and the Ritual of the Rival Tribes. The mood turned solemn as the Sage entered, then burst into controlled chaos in the Dance of the Earth.

After a strange caesura (something to do with an original set change?), the piece gets down to the business of the Rite of Spring itself: preparing for a human sacrifice by choosing a young girl, evoking the ancestors, and participating in the sacrificial dance that will leave the Chosen One dead. Here, as Welser-Möst wrote in his program notes, “People heard for the first time innate brutality, unleashed mechanical power, violent archaic rhythms, and the brute force of nature — not neatly packed into music, but created wholly within the music.”

A hundred and four years later, Stravinsky’s music remains as fresh as when it was newly-minted — shocking, scary, and awesome in the true meaning of that word. And although Welser-Möst conducted the work with apparent sangfroid, The Cleveland Orchestra responded with razor-sharp rhythms, harrowing intensity, and ear-piercing sound levels.

The audience response was similarly fervent, and after several callbacks, Welser-Möst proposed an encore, “a beautiful piece for a beautiful audience,” Wagner’s “Good Friday Spell” from Parsifal, in which the title character learns that “nature is transfigured by love and innocence regained.” A powerful antidote to The Rite of Spring, it gave new principal clarinet Afendi Jusef a lovely opportunity to introduce himself to the Cleveland audience.

END_OF_DOCUMENT_TOKEN_TO_BE_REPLACED

Supported by engagingly, yet simple staging by Cara Consilvio, a well-prepared cast of singers told the archetypal story of Cinderella with charm and flair. Framing the production was  a sparse but colorful set and wonderful lighting by Dave Brooks. END_OF_DOCUMENT_TOKEN_TO_BE_REPLACED