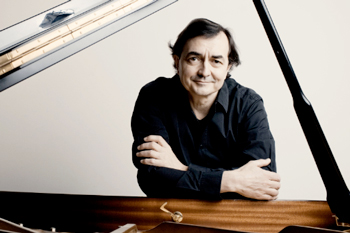 Although French-born pianist Pierre-Laurent Aimard plays a wide range of literature, he has a special affinity for the avant-garde music of Hungarian composer György Ligeti. This weekend, Cleveland audiences will have the excitement of hearing him tackle Ligeti’s phenomenally difficult Piano Concerto in partnership with Franz Welser-Möst and The Cleveland Orchestra. Performances begin on Thursday evening, May 18, and continue on Friday morning, May 19, and Saturday evening, May 20.

Aimard first encountered Ligeti’s music in the mid-1980s, and from 1993 to 2001, the composer entrusted the pianist with the premieres of nearly all of his late Etudes. Ligeti dedicated Nos. 10 and 12 to Aimard himself. He said the pianist had inspired him to compose some of his most complex piano works.

Complex, but remarkably accessible. Speaking by telephone from his home in Berlin, Aimard said, “From the very beginning, I found his music extremely original, and whatever his ideas are, he can communicate them in a clear and efficient way. The first pieces I attempted were from his second period — the big avant-garde era — and I was amazed by their poetic and visual dimensions. Then when the Etudes arrived, I admired his capacity to change his style without changing his identity. He never lost his depth and his sense of humor.”

Ligeti began sketching his Piano Concerto in 1980, finally completing it in 1988. The work, written for and premiered by Anthony di Bonaventura, grew to a great extent out of ideas and influences the composer explored in his first set of piano Etudes.

Though not involved with its birth, Aimard has since made the Concerto his own. “I’ve had the privilege of recording it three times, twice with Pierre Boulez and the Ensemble Intercontemporain,” he said. “I can’t count how many hours it took to learn. It’s a challenging piece because of its virtuosity — which, if I can say so, is of a very intelligent type. It’s also a demanding piece both rhythmically and musically. I think it’s one of the hardest.”

Having conducted the piece as well as played it, Aimard knows the Concerto from both sides. “Little by little, you learn the piece in all its dimensions.” Those dimensions include an extraordinary approach to rhythm and meter. “This is one of those pieces that has many layers of time,” he said. “When Ligeti writes polyphony, the listener will have the feeling that each of the musicians is playing at a different speed, and at some moments in this piece, different music, leading to a very rich texture.”

Pierrea-Laurent Aimard has embraced digital technology to share his insights into Ligeti’s music. His performances of Ligeti Etudes on Explore the Score include scrolling scores and interviews. Elsewhere, you can follow the music along with his performance of the Piano Concerto in a YouTube video with Pierre Boulez and the Ensemble Intercontemporain. Ligeti’s publisher, Schott, has also made the entire orchestral score of the Concerto available for viewing on its website.

To follow Aimard’s performance along with the written notes is to marvel at the rhythmic complexity of the music. Almost nothing coincides with the big beats of the measures — everything happens in between. It’s also fun to notice the variety of instruments the percussionists bring into play, including an ocarina, a slide whistle, and a harmonica. “They’re only two players,” Aimard said, “but they’re very active participants.”

What would Aimard say to someone who’s about to hear the Ligeti Piano Concerto for the first time? “I would say that this is one of the best piano concertos ever written, an absolute masterpiece, a piece with incredible energy, fantasy, colors, and rhythms. The performers form a society in which each member participates and acquires a lot of responsibility. It’s not just a romantic hero who is served by a crowd of slaves as in many romantic concertos — it’s very participative.”

The pianist also counsels listeners not to judge the work on first hearing. “It’s a very rich piece in that there is no hope for understanding everything immediately. Like a lot of polyphonic music by Bach or of the Renaissance, it’s worth listening to many times to discover more richness each time. But this doesn’t mean that you will be frustrated the first time you listen to it. There is so much to enjoy and Ligeti is such a good communicator that he gives you a lot from the very start.”

Published on ClevelandClassical.com May 15, 2017.

END_OF_DOCUMENT_TOKEN_TO_BE_REPLACED

Although it wasn’t the original plan to go online last weekend for the final round of the James Stroud Classical Guitar Competition, moving to a digital format suited the event well. Young performers Aytahn Benavi, Patricia Hernandez, Ian Tubbs, and Eric Wang played in the intimate setting of their own homes, giving everyone who tuned in a front row seat. END_OF_DOCUMENT_TOKEN_TO_BE_REPLACED

END_OF_DOCUMENT_TOKEN_TO_BE_REPLACED

Joining a long list of arrangers, Parker Ramsay has now transcribed the Variations for the modern pedal harp, an instrument for which he holds a master’s degree from Juilliard, in addition to a degree in history from Cambridge University, plus a master’s in historical performance (organ and harpsichord) and an artist diploma (organ) from Oberlin. END_OF_DOCUMENT_TOKEN_TO_BE_REPLACED