The new work is organized in three sections, each marked off by plunky trumpet notes. But listeners might find themselves more drawn to isolated details in trying to make sense of these twenty minutes of action-packed music.

Practically every musician gets a solo line in the swarm of the opening section, including a moment for the first four players in the second violins, each on his or her own part. The full orchestra comes together in a crescendo at the piece’s emotional center, only to cut away to a single, expressive note held by concertmaster Peter Otto. The gesture is repeated at the work’s very end, this time with trumpets and tubular bells still ringing out after everything else has dropped away.

The idea is to keep the intensity level up, even as the music passes from ensemble to individuals. The composer’s shortcut for this is the percussion section, which not only drives the piece rhythmically but gives it much of its character. The Orchestra’s percussionists were up for the challenge of a seemingly endless array of instruments, from drums to gongs to slide whistles, adding a multitude of colors while remaining united in musical purpose. 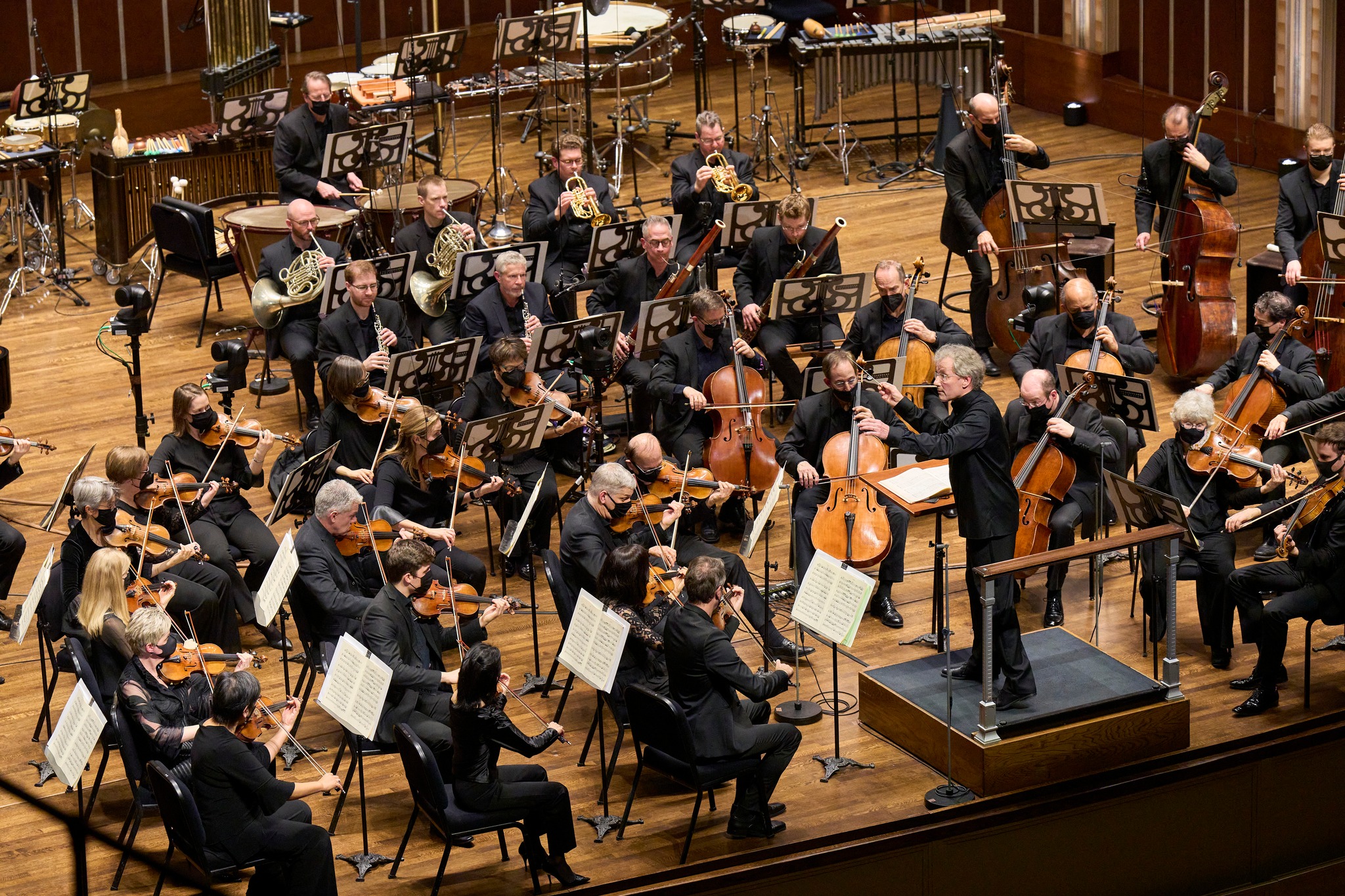 That sheer variety of sounds rubbed off on the program’s second half, occupied by Dvořák’s Symphony No. 8. In the Adagio, the flutes and oboes made interjections resembling a barrel organ, and the reeds and low strings began the fourth movement’s middle section with all the menace of a war march.

The general mood of Welser-Möst’s interpretation was tempestuous, suited to the Symphony’s more dramatic moments. He pushed the first movement closer to its Allegro con brio marking than tradition would take it, and he kept the accompaniment agitated throughout the third movement, even in its delicate Trio section. The terraced tempo indications at the beginning of the final movement — ratcheting up a couple of clicks at a time — started quick and only got quicker, almost catching the ensemble off guard.

The Orchestra was in top form for the lightning-fast Presto of the concert’s opener, Mozart’s Symphony No. 36 (“Linz”). Here, speed was a character, just one of many that Mozart captured in an instrumental work that’s surprisingly operatic. The first movement, from Adagio to Allegro spiritoso, unfolded with the spirit of a cabaletta, and the first violins played a starring role throughout, from bravura trills and turns to grace notes like chortles. It made for a colorful start to the evening.

END_OF_DOCUMENT_TOKEN_TO_BE_REPLACED

Then, you heard all the qualities that make for a stunning soloist. Winner of the 2013 Cleveland International Piano Competition, Khristenko was back in town this month for a recital in Piano Cleveland’s summer series, Piano Days @CLE. And he couldn’t help but revel in the spotlight a little, even as he settled into a more collaborative role at the keyboard for his program, “Stanislav and Friends.” END_OF_DOCUMENT_TOKEN_TO_BE_REPLACED

Now, both pieces on Saturday might be called one thing, but they really sound like another. “Symphony” is a title that would fit Sergei Rachmaninoff’s Piano Concerto No. 2, as well as John Adams’ modern masterpiece for orchestra, Harmonielehre. END_OF_DOCUMENT_TOKEN_TO_BE_REPLACED

And the Orpheus effect has everything to do with who’s not onstage. The New York City-based group has rehearsed and performed without a conductor since its founding in 1972, and this means its members share the musical authority that typically rests with one person. Multiplied by a dozen or so, the interpretation of a piece suddenly emanates from every player, from the concertmaster to the double bass, resonating with a kind of collective power. END_OF_DOCUMENT_TOKEN_TO_BE_REPLACED