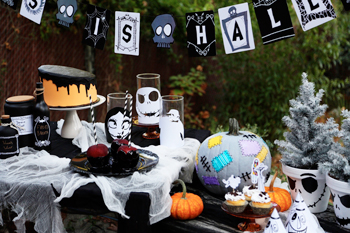 Last Tuesday evening the Cleveland Orchestra under new Assistant Conductor Vinay Parameswaran performed Danny Elfman’s imaginative score to Tim Burton’s The Nightmare Before Christmas live with visuals and sound track. Paramesaran’s coordination was impeccable and the orchestra sparkled with beautiful timbres and ensemble. Burton wrote the original poem that inspired the movie in 1982. Disney began considering its development as a horror short or 30-minute television special, and ultimately released the full-length movie in 1993.

Beginning slowly, the overture soon accelerated to Allegro with woodblock, xylophone, and timpani dominating. Elfman employed a half-step motive like the menacing shark theme in Jaws, but treated it more gracefully with harp and strings and an eerie oboe solo.

Elfman also introduced the requiem-based Dies Irae theme. The multi-timbered music soon accompanied a tour of Halloween Town, exposing a bizarre bevy of ghosts, ghouls, goblins, vampires, worms, snakes, and maggots, all citizens of this eerie world. Everyone sings, “Jack is back,” giving the effect of a lively operatic ensemble with tutti accompaniment. Shrill piccolos and triangles punctuate the flow.

Wandering the cemetery, Jack Skelington, the “pumpkin king,” bored with his lot, sings his Lament with celesta, soloistic strings, a few woodwinds, and muted brass providing a soft background. He finds doors to various holidays while wandering the woods, visits Christmas Town, and decides that he must take over Christmas.

Horns and flutes in a widely spaced doubling return to the Dies Irae to accompany images of a sleigh pulled by skeleton-headed reindeer and led by Jack’s ghost dog, Zero, whose nose glows like Rudolph’s. The police’s attempt to shoot Jack and his sled out of the sky combined a low trombone solo with chimes, other bell-like percussion, punctuating snare drums, bass drums and timpani.

The “Jack’s back,” theme reappears when Jacks rescues Santa. Oogie, turning Day-Glo-green amidst other glowing colors, sings his threatening bluesy solo to Sally. Jack unravels the thread holding Oogie together revealing a dying mass of bugs and maggots falling into a caldron.

Sally, accompanied by the violins, declares her love for Jack leading to a gentle, quiet ending. The closing credits returned to kaleidoscopic full-textured themes used throughout the film.