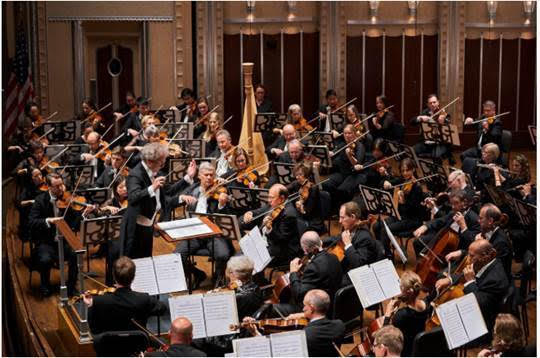 The three works on The Cleveland Orchestra’s Thursday, January 30 program all evoked other music — a different composer, another piece, or a famous performance. Opening the concert was Prokofiev’s Sixth Symphony, decidedly a B-side in the composer’s symphonic catalogue. Orchestras are more likely to program the Fifth, and academics find more interest in the First. This weekend at Severance Hall, music director Franz Welser-Möst and the Orchestra made a deliberate case for the underrated, a running theme that continues later this season with more symphonies by Prokofiev as well as by Schubert.

Perhaps the idea of underappreciated music spurred Welser-Möst’s introductory remarks from the podium. He emphasized the subtext in Prokofiev’s writing (constrained composer in Soviet Russia) and offered the colorful analogy of Stalin holding a gun to Prokofiev’s head and saying, “You must write cheerful music!” In fact, government censorship has always played a big role in Russian artistic life, from Pushkin to Prokofiev. More specific to classical music, this way of thinking about Prokofiev borrows from the popular analysis around Shostakovich.

But where Shostakovich lays into extreme emotions, Prokofiev’s Sixth Symphony resigns itself to ambivalence. A motif taken up throughout — short notes — seems scared to dwell on any one feeling for too long. Four short, humorous notes begin the first movement, but things quickly turn unfunny. Those notes grow increasingly menacing in the piano and bass drum, only to be upstaged by the woodblock, which reappears in the Largo second movement. The Orchestra expertly dispatched these abrupt changes in mood. Nonetheless, evasion seems to be the game Prokofiev was playing.

Technology is a disquieting strain throughout the work. Siren-like swells in the horns, and later in the clarinets, are an echo of World War II, captured with appropriate eeriness at Thursday’s performance. Prokofiev further strips away at the characteristic expressiveness of orchestral instruments in favor of a brutal, almost electronic sound. The first movement flatlines to the end, with a sterile, long-held last note. The third movement, Vivace, concludes with an intentionally splatty and almost toneless coda.

A more expressive style of playing does emerge for the musicians, but with challenges. Instruments are tied to one another for extended passages — English horn and violas, trumpet and first violins, bassoon and cellos. Prokofiev’s melodies are never truly freestanding, but The Cleveland Orchestra musicians excelled at this tricky kind of across-the-ensemble playing.

Two cheery tone poems filled out the second half of the concert, an effective programming move — big piece up front, shorter works after intermission. First was Frank Bridge’s The Sea, which inevitably invites comparisons to Debussy’s La Mer, written just five years earlier. Bridge’s music doesn’t quite live up to Debussy’s — it’s less subtle and has more than a touch of the sea shanty to it — but it has its moments. English hornist Robert Walters brought a commanding sound to a largely unaccompanied solo in the “Storm” movement.

Paul Dukas’ The Sorcerer’s Apprentice made a charming end to the evening. As a listener, it might be impossible to kick Mickey Mouse and the Stokowski soundtrack out of your head, but part of the fun came in knowing what to expect next.

Photo by Roger Mastroianni from an earlier performance.