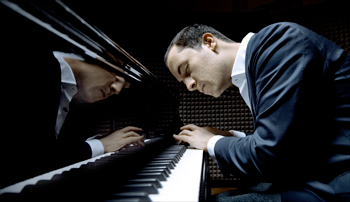 Friday’s Cleveland Orchestra program, the first of 2015’s three Summers@Severance concerts, opened with Olivier Messiaen’s Hymne, composed in 1933. The score was lost during the war and reconstructed from memory by the composer in 1947. The original title (Hymne au Saint-Sacrement) indicated explicitly that it was an act of reverence to the Holy Eucharist of the Catholic Mass, and it apparently represents that ritual.

Vast sweeps of sound (the movement of the Holy Spirit, perhaps) open the piece, with lots of chords in parallel motion, and the reedy timbres of a cathedral organ (Messiaen was organist at the Church of the Trinity in Paris). An extended section of meditative music from the strings follows (one imagines worshippers at prayer). The piece ends with a grand and triumphant section with full orchestral forces, the brass playing with particular vigor. If this had been a piece in the High Baroque, this would have represented the triumph of the Church. It certainly meant some kind of exaltation to the devoutly Christian composer.

Following this very French piece, the young Russian-born pianist Igor Levit, who now makes his home in Germany, made his Cleveland Orchestra debut with Beethoven’s Fourth Piano Concerto. Lithe and energetic, Levit brought a strong character to the piece from the very first moment, with his surprise roll of the opening chord. He delivered Beethoven’s bold gestures in this radical concerto with verve. Levit is particularly notable for his remarkable percussive chords, which punctuated the orchestral texture like claps of thunder.

At moments, Levit played with a generous rubato, but in faster passages, his clear and forceful fingerwork projected a powerful sense of rhythmic energy. Hearing him, one imagined some of the excitement that Beethoven’s Viennese audiences must have felt when the virtuoso composer pushed his fragile pianos to the limit. As thrilling as Levit’s performance was, his delivery of the lyrical and meditative aspects of the concerto were less convincing than his explosive declamations.

The second half of the concert consisted of Richard Strauss’s Symphonia domestica from 1903, which in a series of episodes represents evening, night, and morning in the Strauss household — including the squalling of baby Franz, the nagging of mama Pauline, and the Olympian wisdom of papa Richard himself. Clocks strike seven (twice: evening and morning), a lullaby is sung (beautifully conveyed by Robert Walters on oboe d’amore), and passionate lovemaking ensues after baby goes to sleep (this was the man who would write Salome two years later). At breakfast, mama and papa engage in a big fight, but all turns out well in the end.

Though the narrative of Symphonia domestica is patently domestic, one might say of this symphonic poem what ones says about juggling with chainsaws: don’t try this at home. As with any composition by Strauss, the parts are virtuosic in the utmost. There were moments (usually in the loudest, highest, and most intricate passages) when the intonation and ensemble sounded rougher than it should have. Franz Welser-Möst conducted with conviction and assurance. This is clearly music with which he is thoroughly familiar, and which seems dear to his heart.

These Friday evening summer concerts are meant to attract a younger crowd to Severance, and that seems to work — there were considerably more patrons under forty than at the subscription concerts. Certain elements of informality are obviously successful — Happy Hour before the concert, a DJ on the front patio immediately afterwards. Less successful are the “Summers@Severance” t-shirts worn by the ushers (who were noticeably out-dressed by the audience) and the somber, all-black costumes of the orchestra (particularly mournful looking when a massive Strauss orchestra fills the stage). A shorter concert, too, would better fit the summer party mood.

The Orchestra is giving the Strauss another airing at one of three back-to-back concerts at New York City’s Lincoln Center this week (along with the opera Daphne, the Messiaen Hymne, Beethoven’s “Pastoral” Symphony, and Dvořák’s Fifth Symphony). They return to Ohio on July 25 to play Stravinsky, Schumann, and Tchaikovsky at Blossom.

END_OF_DOCUMENT_TOKEN_TO_BE_REPLACED

The Orpheus myth inspired French Baroque composers Jean-Philippe Rameau and Philippe Courbois to write expressive solo cantatas about the famous Greek musician-poet and his futile attempts — because of his own impatience — to rescue his beloved Eurydice from the grasp of Pluto in the Underworld. These are beautifully performed by the clear-voiced soprano Hannah De Priest and the velvet-throated baritone Jonathan Woody (who makes a walk-on appearance in the Rameau). END_OF_DOCUMENT_TOKEN_TO_BE_REPLACED

Now that live concerts are beginning to proliferate, it was delightful to hear Oberlin cello professor Darrett Adkins ring a change on the solo suite format with his Hypersuite No. 3 on September 28 in the Cirigliano Studio Theatre at Lorain County Community College. His program opened the new season of Signature Series performances in Elyria, and was dedicated to the memory of Eva Hornyak. END_OF_DOCUMENT_TOKEN_TO_BE_REPLACED