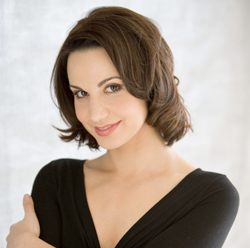 At 95 minutes, Gustav Mahler’s third symphony is his longest, as well as one of the most extended orchestral works in the repertoire. At its center are two wonderful movements featuring an alto soloist, women’s chorus, and children’s chorus that last only a few minutes each, but completely change the emotional trajectory of the symphony.

Mezzo-soprano Kelley O’Connor, who has joined Franz Welser-Möst and The Cleveland Orchestra in half a dozen projects in the past, will return to Severance Hall on Thursday and Friday, October 1 and 2 to sing Friedrich Nietzsche’s “Midnight Song” from Also sprach Zarathustra and “The Bell Chorus” from Das Knaben Wunderhorn in the middle of Mahler’s vast symphony. We reached her by telephone early Wednesday afternoon at her hotel to chat briefly about her role in this weekend’s concerts.

Daniel Hathaway: I understand that you arrived from Los Angeles last night around midnight.

Kelley O’Connor: Yes, but there was no one on my flight and I had a whole row to myself, so I’m not complaining!

DH: There must be a bit of jet lag to deal with.

KO’C: It’s not too bad. I knew we didn’t have a rehearsal until this evening, so it worked out OK.

DH: I believe you were last in Cleveland October and November of 2013 for the Beethoven Mass in C. When did you first have the opportunity to work with Franz Welser-Möst?

KO’C: I was trying to recall, but I think this might be my seventh time with the orchestra. My first professional gig was here in the fall of 2005. Franz was conducting Stravinsky’s Requiem Canticles, which has only two pages of music for the alto. I had just graduated in 2004 when a member of the Orchestra staff heard me at Tanglewood and hired me. So working with Franz and The Cleveland Orchestra was not a bad start, I think!

DH: And did those two pages of Stravinsky prepare you for your role in Mahler 3?

KO’C: There actually might be four pages this time.

DH: Looking at your calendar, you seem to be dividing your time between opera and symphonic engagements.

KO’C: As an alto, it’s kind of tricky to find opera roles that fit my voice and intrigue me. I’ve found that I really love Mahler. He’s written so much that is perfect for my voice and speaks to me as an artist and a person. I really feel that I can perform his music well and I want to do as much of it as I can. I sang my first Lied von der Erde last year and I’m about to sing three or four more.

It’s interesting to have a juxtaposition of Mahler and modern works. When I put up my calendar this year it read Mahler, Mahler, Adams, Lieberson, Mahler, Mahler. It doesn’t always happen that I’m able to find new repertoire by dead composers. I’m thankful that I’ve had the venue and opportunity to explore different repertoire and not just be forced into one thing.

DH: You’re scheduled to sing a number of Mahler 2s this year.

KO’C: (Laughing.) I know! I just did one in Atlanta, and I sang it three years before with them too. They’re going to get tired of me! Then later this season, I’ll sing it in Detroit, Nashville, and San Francisco.

DH: Let’s talk about Mahler 3. What is the life of a mezzo like in this symphony? You sing right in the middle of the longest symphony he ever wrote. Will you be onstage for 95 minutes?

KO’C: My itinerary says I come onstage after the first movement, which is really half of the symphony. I’m dreading that some day, some conductor is going to say “You’re going to have to sit out there the whole time.”

Last season, I sang the symphony in Houston, then the mezzo scheduled to sing it in Dallas the next week cancelled, so I had two whole weeks of Mahler 3. It was wonderful to hear the piece eight times in two weeks. I get to sit onstage and soak up everything. I’m not really a soloist, I’m part of a collaborative effort. I’m incorporated into the piece and I’ve got to fit into the orchestra. In Dallas, I was located way in the back of the string section, and that was amazing. I wish they could sell tickets for those seats. Especially with Mahler, you can feel everything. There are so many musicians onstage that it’s kind of overwhelming, but I love sitting out there.

DH: Will you remain onstage for the last movement?

KO’C: Yes, but I would never complain about that. That’s one of my favorite pieces of music. It is sublime, and there’s just nothing better. My favorite Mahler minutes are during this movement. I wouldn’t want to be anywhere else.

DH: You also get to completely change the mood between the first and second piece that you sing.

KO’C: That’s what I like about this symphony. It’s about what the birds are telling him, it’s about what the forest is telling him. You can hear all the different influences that Mahler intends for each movement to have, and then the last one brings it all together so it all makes sense. And that final movement never seems to end.

DH: And the Bell Chorus is one of the most lovable pieces in the repertoire. I’ve always thought some conductor should slip it into one of the Bach Passions just after Peter goes away weeping bitterly for denying Jesus.

K’OC: I know. That chorus does make it feel like everything’s OK, that there’s salvation and redemption for mankind. And to have that announced by the voices of children…

DH: Any other thoughts about returning to sing with The Cleveland Orchestra?

KO’C: I was telling the driver last night that Severance is my favorite hall, and I’m not just saying that. It wasn’t intimidating for my first performance. It was so welcoming and different from anything I’d seen. Even though it might be big, it seems very intimate. I always feel connected to the audience when I sing there. It’s so beautiful. There’s nothing like it, and I’m looking forward to it so much again.

END_OF_DOCUMENT_TOKEN_TO_BE_REPLACED

Rodgers & Hammerstein’s Cinderella was originally produced for television in 1957 — seven years after the animated Disney film was released — and starred Julie Andrews. According to the Rodgers & Hammerstein website, it was viewed by over 100 million people. END_OF_DOCUMENT_TOKEN_TO_BE_REPLACED

The story line has its origin in an 1855 play and an 1842 farce that Thornton Wilder mined for his 1938 play The Merchant of Yonkers. When that turned out to be a flop, in 1954 Wilder made the crucial decision to re-center the show around the character of the legendary marriage broker Dolly Gallagher Levi and renamed it The Matchmaker. END_OF_DOCUMENT_TOKEN_TO_BE_REPLACED

The Dodero Center for the Performing Arts at the Gilmore Academy in Gates Mills is one feature of an impressive campus. The auditorium is shallow, the stage is deep, and the ensemble played without a shell. Throughout the program, the sound, especially in instruments’ lower registers, tended to disappear. END_OF_DOCUMENT_TOKEN_TO_BE_REPLACED