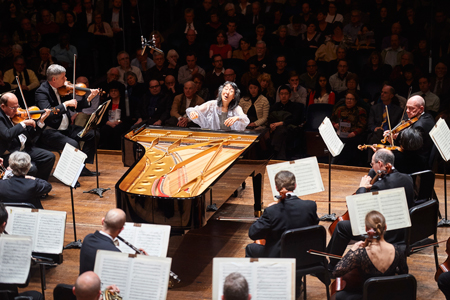 Early and late Mozart piano concertos were featured on the program when pianist Mitsuko Uchida paid her annual visit to The Cleveland Orchestra at Severance Hall last Thursday, February 8. In between, concertmaster William Preucil captained the Orchestra on a virtual musical barge trip down the Thames via festive selections from Handel’s Water Music.

As is her custom, Uchida led performances from the keyboard, facing the players, the tail of the Steinway tucked into the orchestra with its lid removed. There is more than a bit of showbiz involved in her conducting, which seems to be intended as much for the audience as for the Orchestra, who — especially in the case of the Cleveland musicians — could likely play with knife-edge precision blindfolded.

Most of the time, her multitasking works efficiently, although on Thursday, a few finger tangles in Piano Concerto No. 5 hinted at momentary distraction. Not so in Mozart’s last concerto, No. 27, where every note was perfectly in place in a smooth, patrician reading.

Reflecting the different character of the two concertos, Uchida used a smaller string section of 25 players for No. 5, while No. 27 brought nearly the full complement of violins, violas, cellos, and basses into play.

One of the joys of Mozart’s concertos is the interplay between soloist and orchestra, who are engaged in an extended conversation that can turn wry and witty at times. That’s particularly true in the later work, a piece whose general serenity is only breached by comments from the winds.

Another miraculous aspect of the composer’s concertos is the Divine Mozart’s ability to take what is essentially a silly tune and turn it into something transcendent. The Rondo of the 27th concerto is a case in point: the prancing, 6/8 theme, just the notes of an upward and downward triad with a tail attached, then more decorated the second time around, could be intolerably prosaic coming from another composer’s pen.

Drawing from two of the three Water Music suites, Preucil gave the Severance Hall audience a Reader’s Digest version of the work between the Mozart concertos, including enough of its most popular movements to give the Orchestra’s horns, trumpets, and woodwinds special moments to shine. Oboist Frank Rosenwein contributed an expressive cadenza among other solos, and the horns produced golden fanfares.

As in the Mozart concertos, the Orchestra’s ensemble playing was assured and flawless. If King George I had been able to enjoy the services of The Cleveland Orchestra for that river party in 1715, he might have kept the music going all night instead of just ordering it to be repeated three times.

Photo by Roger Mastroianni from a previous concert.

Franz Schmidt’s Symphony No. 4 showcased the ensemble, under guest conductor Jonathan Berman, in the standard conventions of a not-so-standard piece. But at the start of the program, the musicians were equal partners to pianist Cédric Tiberghien, whose playing could be as bold as the full orchestra or as intimate as any instrumental solo. END_OF_DOCUMENT_TOKEN_TO_BE_REPLACED

END_OF_DOCUMENT_TOKEN_TO_BE_REPLACED

Jackson began the program with a recitation of Langston Hughes’ poem “Helen Keller” — the first of five poems by Hughes that served as interludes between each piece on the first half. END_OF_DOCUMENT_TOKEN_TO_BE_REPLACED

Pianos with pins and tape on strings, a bass drum and tam tam, crotales, Almglocken, and vibes. Microphones were hooked up all around the instruments. The feed was sent to speakers around the room. Lighting designer Nicholas Houfek hung incandescent globes over the arrangement of instruments from thin black wires stretching across the beams. END_OF_DOCUMENT_TOKEN_TO_BE_REPLACED

From the podium, Elim Chan set an ambitious tone for the evening. The rising star conductor, here in her Cleveland Orchestra debut, has a commanding style, and every twist and turn in Saturday’s performance tracked closely with her baton. END_OF_DOCUMENT_TOKEN_TO_BE_REPLACED