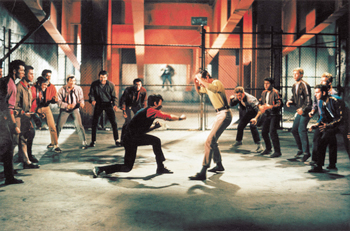 After the deaths of Riff and Bernardo during the rumble in West Side Story, Ice tells the simmering Jets to “keep cool, boy.” Associate conductor Brett Mitchell minded that advice early on Sunday afternoon at Severance Hall when his video monitor gave up the ghost right after intermission. Calmly watching two technicians grapple with that show-stopping problem, he quipped to the audience, “We could just tell you how it ends.” After some tugging on wires, the monitor came to life and the 1961 film version of the show went on to its inevitable, tragic climax amid the symphonic splendor of live music from The Cleveland Orchestra.

Mitchell’s role was crucial and tricky. Thanks to the way movies are made, vocal and orchestral tracks are recorded separately, making it an easy matter to nix the prerecorded orchestra but complicating things for the guy on the podium. It’s one thing to coordinate music between pit and stage in a Broadway musical and quite another to sync live musicians with the inexorable timing of a film. That’s where Mitchell’s video monitor came into play: a series of “streamers” (warnings of upcoming events) and “punches” (dots indicating precise moments of coordination) marched across his screen, superimposed on the movie, giving him both conductorial flexibility and the possibility of exactitude. It was fun to watch.

Conductor and orchestra did an admirable job of playing excitingly and expressively while matching their music to the singing and dancing on the big screen — and Jerome Robbins’ choreography makes West Side Story nearly as much of a ballet with singing and dialogue as it is a beloved piece of American musical theater.

When the original stage version of the show opened at New York’s Winter Garden Theater in 1957, an orchestra of 31 players — large for Broadway — included 5 percussionists, guitarist, and a piano/celesta player. On Sunday, the Severance Hall stage was teeming with musicians, providing an opulent symphonic palette for Leonard Bernstein’s music.

Of course, there are some inevitable shortfalls involved in combining live music with a preformatted medium. The Cleveland Orchestra was the clear winner in sonic terms, the singing and dialogue sounding compressed and dull by comparison.

And the audience didn’t quite know how to react at first to events on the screen. You don’t normally applaud after a big production number in a movie theater, but eventually the crowd on Sunday allowed itself to imagine that singers and dancers were just as much a part of the experience as the Orchestra.

The management kept the lights down during the end titles, staving off the normal run for the exits and allowing the audience to enjoy retrospective music from the score. Brett Mitchell and The Cleveland Orchestra won a huge ovation at the end. After several bows, Mitchell responded by hoisting Bernstein’s score aloft for its own round of applause.

END_OF_DOCUMENT_TOKEN_TO_BE_REPLACED

Rodgers & Hammerstein’s Cinderella was originally produced for television in 1957 — seven years after the animated Disney film was released — and starred Julie Andrews. According to the Rodgers & Hammerstein website, it was viewed by over 100 million people. END_OF_DOCUMENT_TOKEN_TO_BE_REPLACED

The story line has its origin in an 1855 play and an 1842 farce that Thornton Wilder mined for his 1938 play The Merchant of Yonkers. When that turned out to be a flop, in 1954 Wilder made the crucial decision to re-center the show around the character of the legendary marriage broker Dolly Gallagher Levi and renamed it The Matchmaker. END_OF_DOCUMENT_TOKEN_TO_BE_REPLACED

The Dodero Center for the Performing Arts at the Gilmore Academy in Gates Mills is one feature of an impressive campus. The auditorium is shallow, the stage is deep, and the ensemble played without a shell. Throughout the program, the sound, especially in instruments’ lower registers, tended to disappear. END_OF_DOCUMENT_TOKEN_TO_BE_REPLACED