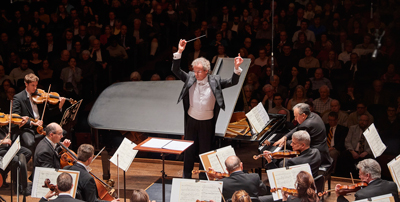 Some composers’ brains generate so many ideas that their compositions bulge at the seams to contain them. That was the case at Severance Hall on Thursday evening, January 12, when music director Franz Welser-Möst, pianist Yefim Bronfman, and The Cleveland Orchestra presented a new work by Jörg Widmann and an old symphony by Anton Bruckner. Packed with musical content, each piece was enthralling in its own way.

Widmann intended to write a four-movement concerto for Bronfman, but found himself obsessed with the material he conceived for the first movement. The result was a single-movement Trauermarsch (“Funeral March”) which unfolds fascinatingly during 25 minutes of complex, eventful music.

Drawing on the old theory of affects like many composers before him, Widmann sets the emotional tone for the first segment of the work using the drooping, two-note figure that German Baroque composers called the Seufzermotiv (and Italian madrigalists knew as the Sospiri or “sighing” gesture).

Widmann soon intensifies that idea and complicates the texture of the music, drawing on the resources of a very large orchestra with myriad percussion at the ready, and creating a palette of glittering sadness. A persistent dotted rhythm underlines the idea of a funeral procession.

Repeated chords in the orchestra against impassioned statements from the piano in its highest register lead to razzy fanfares, then to a passage of calm and a conversation between pianist and solo flute. A sudden outburst heralds general chaos in the orchestra from which the solo piano emerges to explore the low register of the instrument. The piece ends with soft valedictory notes from the contrabass clarinet.

But a blow-by-blow chronicle of events doesn’t do Trauermarsch justice. Subtle details (low-tuned double basses), effects more visual than audible (the caressing of harp strings with a metal bar), and exotic percussion (like the evanescent tones of a waterphone) all added to the visual and sonic landscape.

As in his Violin Concerto, performed here last year, Widmann likes to keep his soloist busy. Though rarely given the prominence of a conventional concerto soloist, Bronfman was part of every event, his hands constantly in motion from top to bottom of the keyboard. The audience was engaged and captivated, giving Bronfman and the Orchestra a long and enthusiastic ovation. 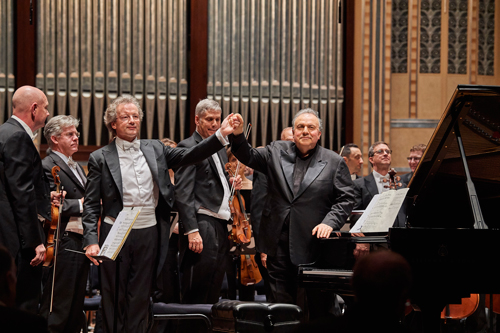 Welser-Möst, who has Bruckner’s music in his genes, led a thrilling performance of the Seventh Symphony, confident in its pacing and supple in its textures. Sonically splendid, the performance was distinguished by flawless brass playing and bolstered by a quartet of Wagner tubas that contributed importantly to the slow movement’s tribute to Richard Wagner.

Violas and cellos marvelously set the tone for the first movement, which doesn’t take long to rise to an ecstatic tutti, then ebbs and flows amid wonderful sotto voce comments from the horns.

Tubist Yasuhito Sugiyama moved to stage right to join the Wagner instruments in the dark-toned introduction to the slow movement. Later, patient percussionists crowned a magnificent climax with the only cymbal crash and triangle trill in the 65-minute symphony (Bruckner calculated his high points astutely).

Bruckner’s scherzos are masterpieces of the form, and constant rhythmic and harmonic tension help the third movement of this symphony make a powerful statement out of what would normally be a joke. The lyrical middle section, played by the strings, was lovely. 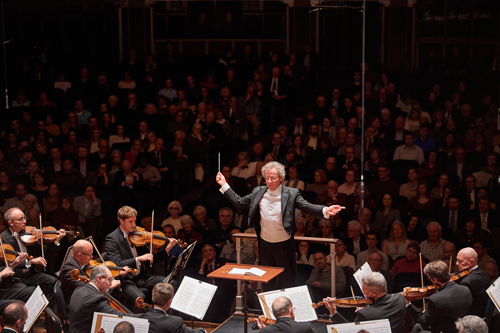 A lively dotted-rhythm theme passed back and forth launches the finale, interrupted by stunning brass statements and relieved by moments of repose, before the symphony ends with a series of gradually intensifying climaxes. Bruckner can stretch out his material for hours, but not being one for long goodbyes, when he’s through, he stops.

The second long ovation of the evening included well-deserved stand-ups for the brass, but also for woodwind players who supplied ravishing solos in between Bruckner’s more monumental passages.

END_OF_DOCUMENT_TOKEN_TO_BE_REPLACED

Rodgers & Hammerstein’s Cinderella was originally produced for television in 1957 — seven years after the animated Disney film was released — and starred Julie Andrews. According to the Rodgers & Hammerstein website, it was viewed by over 100 million people. END_OF_DOCUMENT_TOKEN_TO_BE_REPLACED

The story line has its origin in an 1855 play and an 1842 farce that Thornton Wilder mined for his 1938 play The Merchant of Yonkers. When that turned out to be a flop, in 1954 Wilder made the crucial decision to re-center the show around the character of the legendary marriage broker Dolly Gallagher Levi and renamed it The Matchmaker. END_OF_DOCUMENT_TOKEN_TO_BE_REPLACED

The Dodero Center for the Performing Arts at the Gilmore Academy in Gates Mills is one feature of an impressive campus. The auditorium is shallow, the stage is deep, and the ensemble played without a shell. Throughout the program, the sound, especially in instruments’ lower registers, tended to disappear. END_OF_DOCUMENT_TOKEN_TO_BE_REPLACED