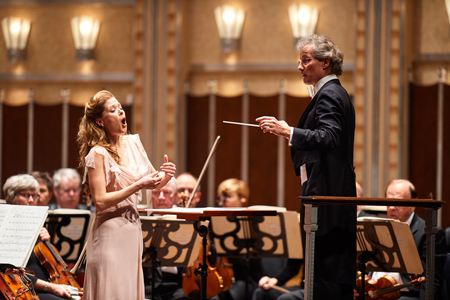 Some of the most arresting concert works don’t end with a bang, but a whisper. Both Hans Abrahamsen’s let me tell you and Dmitri Shostakovich’s Symphony No. 4 dissipated into silence at Severance Hall on Thursday, January 14, as music director Franz Welser-Möst held off the eventual ovations for a long, thoughtful moment. There was a lot to reflect on in The Cleveland Orchestra’s playing of both an enthralling new work and a sprawling Soviet-era symphony.

Abrahamsen’s piece derives from Paul Griffiths’ imaginative prequel to Hamlet, an extended soliloquy in the form of a novel using only the words that Ophelia will speak during the play. At the instigation of Canadian soprano and conductor Barbara Hannigan, the author rearranged those words yet again into seven brief poems invoking the ideas of “memory, time, light, music, glass, and snow” (Cleveland Orchestra program notes) to be cloaked in music by the Danish composer. The work was commissioned by the Berlin Philharmonic Orchestra and the Danish Arts Foundation, and Abrahamsen tailored its vocal lines to perfectly fit Hannigan’s splendid voice. (A CD of the piece with Hannigan, Andris Nelsons, and the Bavarian Radio Orchestra was released last week. Read our review here.)

The just-over-30-minute piece is instantly and continuously captivating. Abrahamsen fields a large orchestra but uses it sparingly and inventively to paint Griffiths’ haunting word-pictures in music. Hannigan, performing from memory, declaimed the text fluently, incorporating Abrahamsen’s arresting vocal techniques into an evocative narrative further expressed through hand gestures. She floated high-pitched lines with ease and her low passages were strong and colorful. Were the words always as intelligible in this live performance as they were on the recording? It scarcely mattered, so eloquent and dramatic was Hannigan’s singing.

While the slow-moving narrative abounds in ear-tickling effects, passages describing the shattering of glass and the gentle, inexorable falling of snow (with eerie microtones) were especially memorable. Welser-Möst and the Orchestra joined Hannigan in an evocative performance of a piece which the audience obviously embraced on its first hearing. Hans Abrahamsen was on hand to bask in a warm ovation. 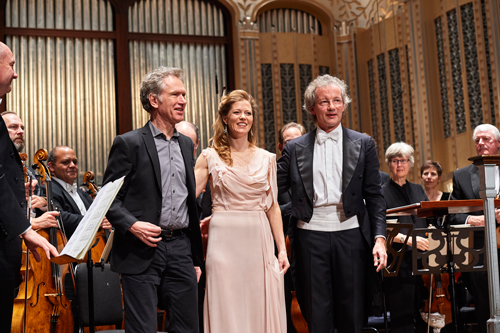 After intermission, the stage crew deserved a round of applause for a complete and efficient reset of the orchestra — some of the sections had been flipped from left to right for the Abrahamsen, and many more players had to be added for the second half of the program.

It took 25 years and a major reconstruction of the score from rediscovered orchestral parts for Shostakovich’s fourth symphony to reach the stage. Withdrawn in 1936 when the composer came under fire from Pravda and finally premiered in Moscow in January of 1961, the piece is both a nightmare for commentators and a treasure trove for audiences.

Defying formal analysis (don’t try it!), the symphony, with its long first and third movements and its short middle-movement rondo, goes by like a series of themed floats in a parade, each individually interesting, but linked only by following one another in a chain of dissimilar events. Here’s a scherzo, now a wild fugue. Look — a funeral march. And there’s a waltz!

Welser-Möst led a finely-paced performance with convincing transitions and a shrewd balancing of climaxes that gave the symphony the illusion of a cogent narrative. The Cleveland Orchestra played splendidly, admirable as always in its ability to manage blended fortes and to play loud without sounding edgy or deafening. And there were so many individuals and sections to credit with outstanding contributions that once Welser-Möst began giving stand-ups at the end, most of the orchestra ended up on their feet.

Franz Welser-Möst led the final bows on Saturday night at Severance, like the star of any show should. The Cleveland Orchestra’s music director is in his element presiding over the ensemble’s annual opera production, which this season packs the drama. Verdi’s Otello — in a concert staging that opened May 21 and runs for two more performances (May 26 and 29) — demands big voices, instrumental forces to match, and a conductor who can give it all shape and direction. END_OF_DOCUMENT_TOKEN_TO_BE_REPLACED

The cimbalom was the feature of the show, an instrument capable of taking on many personas. Its performer, Chester Englander, has shaped his career around the instrument, and has inspired composers to write more repertoire for it, some of which was presented on the program. END_OF_DOCUMENT_TOKEN_TO_BE_REPLACED

You wouldn’t expect that acoustic from a glance at the nave, which is wide and long, but not especially lofty. But when I guest conducted a local amateur choir and professional orchestra in Beethoven’s Mass in C there a few years back, during the first rehearsal we released the final chord of the “Gloria” and listened in astonishment for the next several seconds. The sound continued to roll down the space like the big wave that surfers dream about. END_OF_DOCUMENT_TOKEN_TO_BE_REPLACED