While many American orchestras were just beginning to stir again after the holidays, Franz Welser-Möst and the Clevelanders were busy pulling off one of the most impressive programs in recent memory. A neglected Dvořák symphony, a darkish Mozart piano concerto featuring Yefim Bronfman, and a standout among Janáček’s few orchestral works served up sequential delights on Friday, January 10.

Although the symphony that would eventually become numbered as Dvořák’s fourth was among the compositions that first attracted the interest of Johannes Brahms and the publisher Simrock, raising the composer out of obscurity, the 1874 work wasn’t given a full performance until 1892. And it was first — and last — performed at Severance Hall under Aldo Ceccato 90 years later.

Welser-Möst and the Orchestra made a strong case for Dvořák 4, which took up the first half of the evening. Its enchanting, dotted-rhythm earworm, which dominates the first movement and returns at the end of the symphony, its general feeling of Gemütligkeit, its ravishing use of the wind choir, and its sudden outbursts of Czech pride in the form of what sounds like a national hymn added up to an endearing experience. The Orchestra played it magnificently, and Welser-Möst indulged in a rare display of sheer fun at one point in the Scherzo. 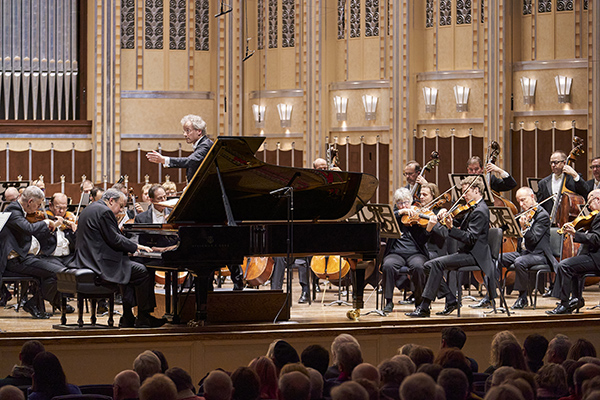 Yefim Bronfman has power to spare at the keyboard, but he can swap that for a kind of elegant intensity in such a work as Mozart’s c-minor Concerto, No. 24. After its symphonic exposition, he entered the fray with a highly-inflected version of the opening theme, making ever-so-subtle tempo variations for expressive effect. After a ruminative cadenza, he saved his musical energy for a huge crescendo to end the first movement.

Supple phrasing from the pianist and alluring solos from the winds distinguished the slow movement, and turns into the major mode in the theme-and-variations finale were sophisticated — not corny. Bronfman spun beautiful halos of notes around orchestral variations and ended the Concerto with a big flourish. 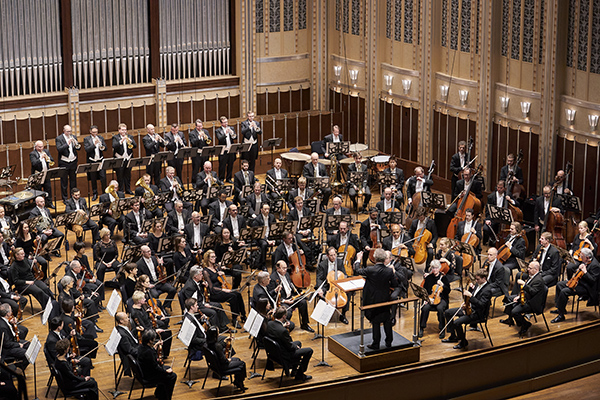 After the stage reset, a phalanx of nine trumpeters took their places, standing in a long row at the back of the stage for Janáček’s “Military Symphonietta,” inspired by the “pretty fanfares” the composer heard from the distant garrison band while walking through a park in his hometown of Brno. While the physical setup might have suggested an imminent onslaught of deafening brass, the opening was pure gold. Two bass trumpets and a pair of Wagner tubas helped join low and high brass in a seamless, resplendent ensemble.

As the work goes on, Janáček’s music forms a little travelogue of favorite places around town — the castle, the Queen’s monastery, the street, the town hall. The Orchestra played a wild dance, three of the nine trumpets joined bluesy trombones, oboe and English horn sang solos over expressive and exotic string textures, trombones were answered by swirls of winds, and a trio of flutes merrily twittered away.

How can you end a piece that began so strikingly? By repeating the beginning fanfares with the Orchestra joining in, and so Janáček did. On Friday evening, the standing brass shone brightly with the orchestra, bringing this unique piece to a stunning conclusion. And a flawless one — without so much as a single brass burble.

Romantic love has worked its magic and wrought its afflictions on humankind in similar ways throughout history. Last weekend, Cleveland’s Les Délices joined Boston’s Blue Heron to chronicle how 14th-century European composers addressed that subject. The matrix for the collaboration between the ensembles was the celebrated Roman de la Rose, whose earliest layer by Guillaume de Lorris dates from ca. 1230. END_OF_DOCUMENT_TOKEN_TO_BE_REPLACED

Despite predictions of snowy weather, there was a full house and enthusiastic audience at the Bop Stop on Friday evening, January 17, for the latest concert by the Cleveland-based new music group No Exit, collaborating with their Twin Cities counterpart Zeitgeist. The program was concise and wildly varied, with several first performances. Each work contained imaginative soundscapes and alluring musical ideas. END_OF_DOCUMENT_TOKEN_TO_BE_REPLACED