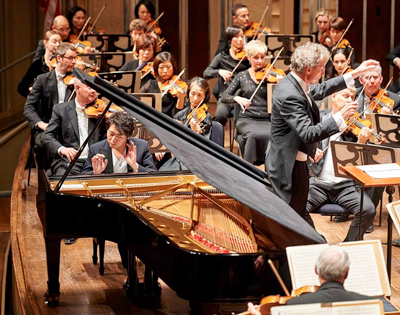 The Cleveland Orchestra built its second subscription weekend around the phenomenal Chinese pianist, Lang Lang, who treated Severance Hall audiences to Richard Strauss’s Burleske on Thursday and Friday evenings and Sunday afternoon, Chopin’s Andante spianato & Grand Polonaise brillante on Thursday and Sunday, and no doubt blew the patrons of the Orchestra’s annual benefit evening away with the first Tchaikovsky concerto on Saturday.

On Thursday evening, Chopin and Strauss bracketed intermission. Joined together ever since Chopin played them that way in 1835 at the Paris Conservatoire, the Andante spianato is a delicate, introspective piece for solo piano, while the Grand Polonaise brillante is indeed both grand and brilliant — and supported by an orchestra with double winds, horns, trombones and timpani.

Lang played sensitively and ruminatively in the Andante, then unleashed all his pianistic flair in the Polonaise. An amiable show-off, he tossed off its difficult passages with abandon while mugging at the audience, and his hands came off the keyboard in what could become a whole photo gallery of histrionic releases. In a piece without a lot of musical profundity to distract the mind, that was fun to watch.

Richard Strauss couldn’t play the solo part of his own Burleske, but it poses no problem at all for Lang Lang. Crystalline conversations between piano and winds turned a bit steely as the pianist warmed to the subject, but his playing was wonderfully rhythmic and his linkups with the orchestra were masterful. Even when he’s not playing, Lang Lang remains completely in the game, making little conducting motions and moving to the music. After he dispatched page after page of complicated solo passages, the piece ended with a tinkling, upward flourish and — like it began — with a timpani stroke.

Thursday evening’s concert began with the presentation of the orchestra’s distinguished service award to James D. Ireland III, and continued with the first performance of Matthias Pintscher’s Idyll, a Cleveland Orchestra co-commission with the Bavarian Radio Symphony and the Melbourne Symphony. The huge orchestra included acres of percussion (a huge thunder sheet ominously hung from the stage house), a contrabass clarinet (itself ominously towering above the expanded wind section), two harps, piano and celesta.

Though Pintscher suggests there are no “declared allusions” in Idyll, the title invokes the idea of a calm, picturesque scene. A very calm one for most of the 25-minute duration of the work, because Pintcher mostly uses all that percussion firepower with infinite subtlety. The alto flute rises out of percussion whispers at the beginning, and a series of similar solos or cadenzas follows, including a long, central one for the piano, (expressively played here by Joela Jones). Sudden bursts of activity are crowned by mallet instruments and timpani. Discordant brass lines devolve into fanfares, then the thunder sheet comes into dramatic play.

In this performance, a lot of the denouement was close to inaudible — there were long moments toward the end when it seemed that Pintscher had given Welser-Möst his own cadenza for solo baton.

The concert ended with an energetic romp through the tale of Till Eulenspiegel as told by Richard Strauss. Principal horn Richard King introduced the rascally Till in flawless solos at the beginning, and E-flat clarinetist Daniel McKelway summed his character up again in sassy licks toward the end. Though perhaps not the tightest performance of Till’s merry pranks Severance Hall has heard, Welser-Möst’s reading was playful and full of wry humor. He even did a little dance on the podium at one point.

END_OF_DOCUMENT_TOKEN_TO_BE_REPLACED

A new CD by Christa Rakich, who is currently Visiting Professor of Organ at the Oberlin Conservatory, gives a nod in two directions. As its title announces, it’s an homage to her former teacher and colleague, the late Yuko Hayashi, longtime professor at the New England Conservatory and curator of Boston’s Old West Church Organ Series. It’s also the first recording to be made of Richards, Fowkes & Co.’s Opus 16 instrument, built in 2008 for Goodson Chapel of the Duke Divinity School in Durham, North Carolina. END_OF_DOCUMENT_TOKEN_TO_BE_REPLACED

END_OF_DOCUMENT_TOKEN_TO_BE_REPLACED

Hailed by the New York Times as “The Best Classical Music Ensemble of 2018,” Wet Ink Ensemble has lived up to this acclaim once again with their recent release Glossolalia/Lines on Black. The album takes its name from the two extended works by Wet Ink members Alex Mincek (saxophone) and Sam Pluta (electronics). The remainder of the septet includes Eric Wubbels (piano), Erin Lesser (flutes), Ian Antonio (percussion), Josh Modney (violin), and Kate Soper (voice). END_OF_DOCUMENT_TOKEN_TO_BE_REPLACED

Croatian-born pianist Martina Filjak, now living in Berlin, has released her latest album, Light and Darkness, featuring music by Franz Liszt — plus an epilogue by Arvo Pärt. The disc confirms once again all the special technical and interpretive qualities that won her the gold medal at the Cleveland International Piano Competition in 2009. END_OF_DOCUMENT_TOKEN_TO_BE_REPLACED