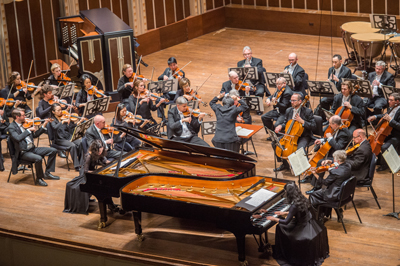 Two rarely-heard works, a duo-piano team making a reappearance after a long hiatus, and a guest conductor who stepped in for an ailing maestro at the last minute to save the scheduled program — all these elements promised more than a little suspense last Thursday evening, February 16 in The Cleveland Orchestra’s concert at Severance Hall.

Katia and Marielle, the Labèque sisters, brought a brilliant reading of Mozart’s two-piano concerto to the first half of the program, while Xian Zhang, replacing Semyon Bychkov, took a pumped-up-on-steroids approach to Pyotr Tchaikovsky’s Manfred Symphony in the second half.

Probably inspired during his sojourn in Paris when concertante concertos involving multiple soloists were all the rage, Mozart’s duo-piano concerto comes down to us in two versions. He originally scored it for pairs of oboes, bassoons, horns, and strings in Salzburg, later adding clarinets, trumpets, and drums for use in Vienna. We heard the original scoring on Thursday evening.

Speculation has it that Mozart wrote the piece for himself and his sister Maria Anna, so it was fun to hear two siblings perform it in Cleveland. Playing from scores, the Labèques were evenly matched, but subtly different in their treatment of material that gets passed between the two performers. Mozart almost dares each of them to put their own spin on the music.

Though curiously short on the charm that inspires most of Mozart’s solo concertos, K. 365 gives its soloists an abundance of sparkling runs to execute, along with the mother of all trills just before the presto ending of the last movement.

The Labèques responded to a warm ovation with something completely different: the fourth of Philip Glass’s Four Movements for Two Pianos, a minimalist romp with a surprising caesura in the middle. 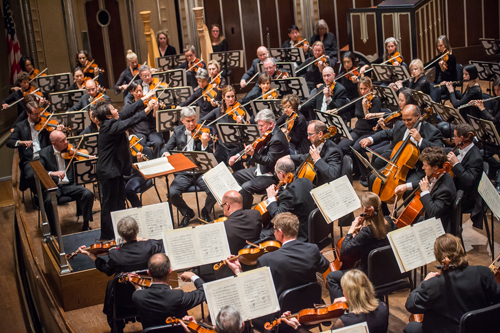 Based on Lord Byron’s dramatic poem Manfred, Tchaikovsky’s symphony had a strange gestation. The project was first conceived by composer Mili Balakirev, who offered it to Hector Berlioz (he declined), then to the reluctant Tchaikovsky (he originally turned it down, but reconsidered).

Xiang Zhang’s penchant for over-conducting was already evident in the Mozart but came into full flower during the Tchaikovsky symphony. She prodded each section of the Orchestra to generate outsized sonorities and dynamics, and whipped tuttis up to deafening levels on too many occasions. Sometimes added bulk was impressive — as in the astonishing string passage following the last-movement fugue — and the work ended in tragic glory when Joela Jones topped the Orchestra off with organ chorales at the end.

Photos by Ken Blaze courtesy of The Cleveland Orchestra.

Bianca Ciubancan (16, Chicago, Ill) began the afternoon session with Jessie Montgomery’s Rhapsody No. 1 for solo violin. Playing with a warm, rich sound, Ciubancan brought a thoughtful, intimate approach to the work, highlighting each of its distinct episodes. END_OF_DOCUMENT_TOKEN_TO_BE_REPLACED

END_OF_DOCUMENT_TOKEN_TO_BE_REPLACED

Franz Schmidt’s Symphony No. 4 showcased the ensemble, under guest conductor Jonathan Berman, in the standard conventions of a not-so-standard piece. But at the start of the program, the musicians were equal partners to pianist Cédric Tiberghien, whose playing could be as bold as the full orchestra or as intimate as any instrumental solo. END_OF_DOCUMENT_TOKEN_TO_BE_REPLACED