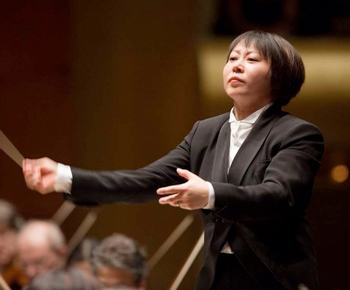 Being ready to perform on short notice is part of what makes life interesting for both conductors and soloists. On Thursday, February 16 at 7:30 pm, conductor Xian Zhang will make her Cleveland Orchestra debut when she steps in for Semyon Bychkov, who was forced to withdraw from this week’s performances on the advice of his physician.

Xian Zhang serves as Music Director of the New Jersey Symphony Orchestra as well as Principal Guest Conductor of the BBC National Orchestra and Chorus of Wales — the first female conductor to hold a titled role with a BBC orchestra.

Ms. Zhang has agreed to lead the originally-scheduled program, featuring Tchaikovsky’s Manfred Symphony and Mozart’s Concerto in E-flat major for Two Pianos with soloists Katia Labèque and Marielle Labèque. The program will be repeated on Friday and Saturday at 8:00 pm.

Last week, before he withdrew, we spoke with Semyon Bychkov from New York to learn more about Tchaikovsky’s rarely-performed Manfred Symphony.

Bychkov began by noting that in Tchaikovsky’s time, the idea of music based on a literary program — like Lord Byron’s popular dramatic poem, Manfred — was commonly accepted. “When you think of the other Russians, as well as Liszt, Schumann, Wagner, and even Berlioz, programmatic music was something that was completely natural,” he said. “But Tchaikovsky’s Manfred has a tortured image and reputation. Because of that, it is hardly ever performed.”

The idea of making a musical adaptation of Lord Byron’s dramatic poem was first proposed to the composer Mily Balakirev, who declined, suggesting Berlioz instead. Berlioz also turned the idea down, citing old age and ill health. “Besides, he had already composed Harold in Italy and Symphonie Fantastique,” Bychkov said.

The project was passed on to Tchaikovsky, who first said he wasn’t inclined to take it on. “But later he changed his mind, became obsessed with the story, and believed that he was composing his best music,” Bychkov said. “The premiere was well-received, but not more than that, and Tchaikovsky couldn’t figure out if it got a good reception because he was liked or because the piece was good.”

The composer, who had only written single-movement tone poems before, later became completely disenchanted with the Symphony. “He wanted to burn the last three movements and rework the first into a symphonic poem,” Bychkov said. “He writes about this in his letters, and when a composer goes on record like that, people will assume that the piece isn’t any good.”

Bychkov notes that people found, and still find, a lot of flaws in the Manfred Symphony, for example with the form and construction of the last movement, and with the fugue that comes later. “A lot of people feel that there’s no place in that movement for a fugue.” 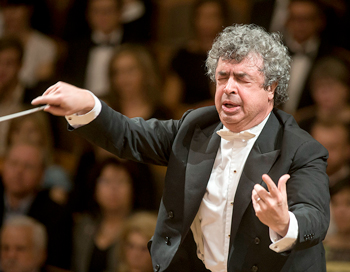 The conductor went on to say that the impression the Symphony makes has a lot to do with the quality of its performance. “I discovered that a performance that truly reveals the piece will reveal an enormous masterwork. One that doesn’t will automatically reinforce negative impressions.”

Bychkov said that many conductors have tried to bring it off by making cuts. “Even Toscanini, who I venerate as an artist. And very often conductors will end the Symphony with the coda from the first movement to make a big statement, which is not at all the composer’s intention.”

Other alterations in Tchaikovsky’s concept also produce unfortunate results. “We know that the Symphony ends with redemption, but it can make you cringe when you hear an organ at the end. In fact, Tchaikovsky composed it for harmonium — the organ was only an option. The whole idea is to create the image of a celestial spirit, not to find yourself in a huge cathedral with an organ blasting everything away.”

Bychkov disagrees with some of the stock reactions to Tchaikovsky’s music that stand in the way of appreciating works like the Manfred Symphony. “During his lifetime and ever since, Tchaikovsky has been reproached for not having the ability to create an organic form in his compositions. Also for only having the gift of writing melody, and for being a hysterical person in everything but his ballet music.”

Bychkov finds Tchaikovsky’s music both superbly crafted and full of subtlety. “His music is deeply contrapuntal, and the amount of information that he gives us in the score is comparable to Mahler. He gives you a roadmap and when you follow it, it becomes complex and extremely difficult. But it is not hysterical in nature, it is as the man himself was, very noble. It is full of drama and tragedy, and love and joy — the whole spectrum of mood and expression.”

The conductor feels that a lot of Tchaikovsky’s musical charm is conveyed almost subliminally. “People loved Tchaikovsky in his lifetime, and continue to do so today, but they don’t know why his music touches them so much. That’s because he has a gift to go straight to the heart of the audience — and sometimes to twist a knife into that heart.”

Bychkov finds Tchaikovsky’s personality enshrined in his music, but also in his voluminous correspondence. “What emerges from those letters is an image of a person who is fundamentally good and noble, someone who is loved because he was kind. But at the same time, so many of these letters are confessions of the soul. They address the great complexity of subjects like religion, politics, and love. In later years, he became more religious and felt the need to embrace God. He said, ‘God doesn’t need our prayers, we do.’ A little sentence like that makes you think. So you have a person who is not only a deep feeler, but also a deep thinker. He was a genuine intellectual, but of the kind that common people are able to relate to and grasp.”

The cimbalom was the feature of the show, an instrument capable of taking on many personas. Its performer, Chester Englander, has shaped his career around the instrument, and has inspired composers to write more repertoire for it, some of which was presented on the program. END_OF_DOCUMENT_TOKEN_TO_BE_REPLACED

You wouldn’t expect that acoustic from a glance at the nave, which is wide and long, but not especially lofty. But when I guest conducted a local amateur choir and professional orchestra in Beethoven’s Mass in C there a few years back, during the first rehearsal we released the final chord of the “Gloria” and listened in astonishment for the next several seconds. The sound continued to roll down the space like the big wave that surfers dream about. END_OF_DOCUMENT_TOKEN_TO_BE_REPLACED