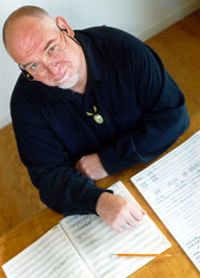 Whether you’re a member of a “Big Five” orchestra or not, the prospect of performing a newly-composed work is always exciting. On Friday, November 18 at 8:00 pm at Severance Hall, the Cleveland Orchestra Youth Orchestra (COYO) under the direction of Brett Mitchell will have that opportunity when they present the world premiere of Roger Briggs’ Fountain of Youth, commissioned by COYO. The program will also include Bruckner’s Symphony No. 4 (“Romantic”).

For composer Roger Briggs, the COYO commission was immediately attractive to him for two reasons: first, it provided him with the opportunity to write a new work that would be conducted by a former student. “Brett Mitchell studied composition and conducting with me at Western Washington University. He was a marvelous talent,” Briggs said during a telephone conversation. “I remember playing Billy Joel’s Just the Way You Are on the piano in class one day, and afterwards he politely came up and told me that I had left out a note of a chord, and he sat down and played the chord adding the note.” Briggs recalled. “I told him I didn’t think he was correct, so I immediately went to the score, and he was right!”

Second, it would be his first commission for a large-scale symphonic work from a youth orchestra. “The Cleveland Orchestra Youth Orchestra has the reputation of being one of the finest youth orchestras in the world, so I wrote the piece as though I was writing for a professional orchestra — I knew I didn’t need to write down to them,” the composer said.

Briggs’ said that he chose to title his eighteen-minute tone poem Fountain of Youth only in part because he wrote it for a youth orchestra. “I’m 64 years old, and although I don’t think that many people would call that youth, I still feel young in so many different ways. So I could not help but think of the Fountain of Youth,” the Florence, Alabama native said. “The first thing I thought of was the mythical fountain that Ponce de Leon was searching for.”

Then his thoughts turned to literal fountains and their powerful ascent of water until it reaches its highest point and gravity forces it to return to its source. “That is what is going on in a fountain, but it can also be taken metaphorically for a life cycle. We reach the top of our arch and we remember our youth, but realize that it is out of our reach. Then we each enter a decline against the forces of nature. That’s when I understood that these three layers — the legend, the literal, and the metaphorical — would provide me with enough material to write something that would not just inspire youth, but also capture something about our lives and journeys. The more I experience, the more I become hopeful that we will be replenished with each generation. The young people in COYO are going to replenish music, and that’s a beautiful thing.”

Written in a single movement, Fountain of Youth is scored for large ensemble — triple winds, full brass complement, and a large percussion section. It also includes amplified piano, celesta, and harp, which Briggs uses to create the effects of a fountain. “The work begins with the heroic energy of youth until the music turns to more reflective material,” Briggs explained. “I hope it will be a satisfying and meaningful experience for the musicians and the audience.”

Briggs said that he always looks forward to hearing a new work of his for the first time, although he does have a sense of detachment from it. “I feel like, OK, there it is, all grown up. My child is out there in the world and I have no more say. It’s on its own journey now, and it’s time to move on my next work. I also listen to it pretty critically — why did I say that so many times, or why didn’t I say that a little more.”

Jackson began the program with a recitation of Langston Hughes’ poem “Helen Keller” — the first of five poems by Hughes that served as interludes between each piece on the first half. END_OF_DOCUMENT_TOKEN_TO_BE_REPLACED

Pianos with pins and tape on strings, a bass drum and tam tam, crotales, Almglocken, and vibes. Microphones were hooked up all around the instruments. The feed was sent to speakers around the room. Lighting designer Nicholas Houfek hung incandescent globes over the arrangement of instruments from thin black wires stretching across the beams. END_OF_DOCUMENT_TOKEN_TO_BE_REPLACED

From the podium, Elim Chan set an ambitious tone for the evening. The rising star conductor, here in her Cleveland Orchestra debut, has a commanding style, and every twist and turn in Saturday’s performance tracked closely with her baton. END_OF_DOCUMENT_TOKEN_TO_BE_REPLACED