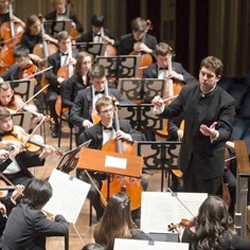 As many conductors and orchestras have learned through experience, capturing the essence and style of French music is not easy unless you’ve been blessed with Gallic genes. On Sunday evening at Severance Hall, Brett Mitchell and the Cleveland Orchestra Youth Orchestra and Chorus won honorary membership in Le Panthéon with convincing performances of challenging scores by Maurice Ravel, Claude Debussy and Gabriel Fauré.

The first half of the program was all about the sea. The transparent yet colorful textures of Ravel’s Une Barque sur l’océan and Debussy’s La Mer leave players with few places to hide and demand both clarity of line and opulence of tone.

Though some entrances were a bit tentative in the Ravel, COYO’s flutes, piccolos, English horn, harps, celesta and muted strings conjured up impressionistic magic at the brief work’s beginning and end, and the brass crowned its midpoint with depth and authority.

Different soloists took over for the Debussy, whose atmospheric first movement (“From Dawn to Noon…”) was distinguished by sonorous playing from the cellos — divided into four choirs — and energized with a resounding climax by the whole ensemble. Oboe, English horn and violin solos (played by Joseph Tolonen, Scott Little and Jieming Tang) were lyrical and true in the middle movement (“Play of the Waves”), which was brought to an agreeable conclusion by piquant harp and glockenspiel. The cellos made another splendid impression in the third movement (“Dialogue of the Wind and the Sea”), and the full orchestral sound at the end bloomed with vigorous color, again supported by the first-class brass section.

Initially dark in its instrumental textures, but lyrical where other Requiems get scary, Fauré’s setting gives special prominence to the orchestra’s violas, cellos and basses. COYO’s low string section especially shone in the “Offertory,” where the chorus demonstrated its prowess in tuning up some tricky a cappella counterpoint.

Guest baritone Nikola Budimir movingly sang the solo in the “Hostias” section of that movement, returning later for an equally fine account of the more operatic “Libera me, Domine.”

Though their lines slightly sagged in pitch in parts of the “Sanctus,” the Youth Chorus blended their tone winningly. Harp and violins (the latter now playing for the first time in the Requiem) added a lovely countermelody, and the brass colored the “Hosanna” with noble fanfares.

Though the last three movements — “Agnus Dei,” “Libera me” and “In Paradisum” — were paced a bit too slowly to allow their melodic lines to bloom, COYO and COYC achieved a lovely tonal synthesis. Could the Requiem’s only moment of Last Judgment terror been more hair-raising? Perhaps, but the final chorus of welcoming angels couldn’t have been more ravishing. Keyboardist Yun Cao wins the Joela Jones award for his adept handling of important celesta and organ parts in the same program.

COYO’s third and final concert on Sunday, May 3, includes Samuel Barber’s Medea’s Dance of Vengeance and Béla Bartók’s Concerto for Orchestra. A bonus event on June 14 will be a send-off concert for COYO’s second international tour, which will take the ensemble to China from June 15-24.

Jackson began the program with a recitation of Langston Hughes’ poem “Helen Keller” — the first of five poems by Hughes that served as interludes between each piece on the first half. END_OF_DOCUMENT_TOKEN_TO_BE_REPLACED

Pianos with pins and tape on strings, a bass drum and tam tam, crotales, Almglocken, and vibes. Microphones were hooked up all around the instruments. The feed was sent to speakers around the room. Lighting designer Nicholas Houfek hung incandescent globes over the arrangement of instruments from thin black wires stretching across the beams. END_OF_DOCUMENT_TOKEN_TO_BE_REPLACED

From the podium, Elim Chan set an ambitious tone for the evening. The rising star conductor, here in her Cleveland Orchestra debut, has a commanding style, and every twist and turn in Saturday’s performance tracked closely with her baton. END_OF_DOCUMENT_TOKEN_TO_BE_REPLACED