Last Saturday evening, May 5, the Cleveland Orchestra Youth Orchestra presented its final concert of the season at Severance Hall under conductor Vinay Parameswaran. The evening’s highlight was 20th-century Polish composer Witold Lutosławski’s Concerto for Orchestra, a massive, three-movement piece that filled the stage with young musicians.

A high string unison heralds a powerful cadence, xylophone and bells take up the ostinato, and a full tutti follows. Expressive solos by principal flute, oboe, and clarinet (Krysta-Marie Aulak, Kate Young, and Peter Varga), as well as English hornist Amelia Johnson and concertmaster Julia Schilz, stood out. The energy dissipated into a sustained chord in the strings.

The three-part Capriccio notturno ed Arioso featured soft and delicate scherzos flanking a more raucous central section announced by a strident trumpet unison. Snare drum, clarinets, and flutes competes against the sustained sonority of the ensemble, and a sudden staccato chord stifles the motion. The return to soft, rapid material from the first section included a potent solo by principal tuba Nicholas Withey and the quiet brushing of the snare drum. Ensemble was meticulous throughout.

Slow outer sections flank a fast, loud Toccata in the finale. The opening Passacaglia theme began with nearly inaudible basses and harps, and gradually the rest joined in. Johnson’s beautiful English horn solo led to cello and violin entrances and increased counterpoint with clarinets and brass.

The playfully forceful Toccata is punctuated by short chords. The harps play against a tremolo background from the strings, full tuttis pit section against section, and the Corale theme moves from oboes and clarinets to brass and muted strings. Thereafter, the performance became a virtuosic display as themes and statements of the original ostinato returned. 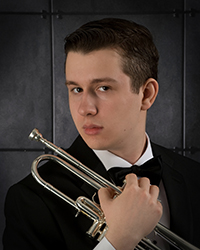 Richard Danielpour’s Toward the Splendid City is a perpetual motion portrayal of the composer’s home of New York City after his year-long residency in Seattle. Loud, muted trumpets, intense unisons from the horns, and lots of marimba and vibraphone help distinguish the piece from the Lutosławski, composed 36 years earlier. Given the work’s complexities, the orchestra played it with impressive panache.

Published on ClevelandClassical.com May 8, 2018.