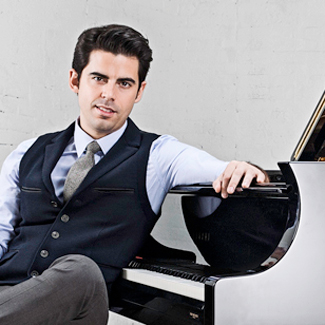 “I fell in love with the piano when I was ten years old,” pianist/singer/composer Tony DeSare said during a telephone conversation from his home in New York City. “Of course back then I didn’t know that I would be a musician — I was just obsessed with playing the piano — and this show is for people who have a passion for this amazing instrument, whether they play it or not.” On Saturday, March 25 at 8:00 pm in Severance Hall, Tony DeSare will join Carl Topilow and the Cleveland Pops Orchestra for I Love a Piano.

A champion of the Great American Songbook, which he believes did not end in 1965, DeSare is comfortable performing in venues ranging from jazz clubs to Carnegie Hall, as well as with major symphony orchestras. With three top ten Billboard jazz albums to his credit, The Glen Falls, N.Y. native has been featured on the CBS Early Show, NPR, A Prairie Home Companion, and the Today Show. His composition credits include the theme song for the motion picture My Date With Drew as well as the full soundtrack for the December 2016 film Love Always, Santa.

DeSare’s infectious enthusiasm for the piano is probably best captured in his popular video, I Love a Piano, (watch here). Each summer the charity Sing for Hope places pianos that have been donated and painted in parks and public spaces in all five boroughs for people to play. “I had this crazy idea of making a video of me playing all of the pianos while singing the Irving Berlin song,” DeSare said.

The video was shot in one day by two cameramen disguised as tourists. “I played the song once, then ran to the ‘getaway car’ that my wife was driving and headed to the next location. We spent about ten minutes at each piano. At the beginning there was no one around, but by the end a small crowd had gathered. It was a memorable experience, and it drove home the diversity that exists in the communities of NYC.”

DeSare said that the show, I love a Piano, is a tribute to the great singer-songwriters and pianists of our time. “It did take a while to narrow down the list. There are so many people that I love, but I also wanted it to be a list of artists that everybody else loves as well.” The show will open with an overture featuring a whirlwind tour of famous piano ‘hooks’, starting with Bach and continuing through to Adele.

The show’s playlist will include a tribute to Elton John. “He’s such a great piano player. He’s the only superstar who can entertain 20,000 people at Madison Square Garden all by himself with a piano.”

Other famous piano tunes that will be featured include Billy Joel’s Piano Man, Ray Charles’ What’d I Say and Hallelujah I love Her So, and John Lennon’s Imagine. “I’ve also included Journey’s 1980s piano-based power ballad Faithfully — and of course, Irving Berlin’s I love a Piano.

The second half will feature George Gershwin’s Rhapsody in Blue, with DeSare as soloist, a work the pianist said first caused him to take the piano seriously.

“My dad bought a CD of Gershwin’s music that included American in Paris, the Preludes, and Rhapsody in Blue. The first time I heard the Rhapsody, it blew my mind — no pun intended. I kept listening to it over and over. Finally, my dad said we should get the sheet music so I could see it too. I didn’t intend to start learning it, but I couldn’t help myself, so for the next year I learned it to the best of my ability. I mean I had only been playing for two years at that point, so most of it was above what I could do. But my biggest dream back then was to play it with an orchestra, and now all these years later it has come to fruition. I played it with Houston Symphony back in November, and that was very moving for me.”

De Sare said he finds that jazz players will sometimes take too many interpretive liberties when performing Rhapsody. “Who am I to change a note of Gershwin? But he loved ragtime and stride, and those are my big strengths. They’re both in that piece, and unless you come from that tradition you can’t really pull it off authentically.”

Creating I love a Piano was a work of passion for DeSare. In addition to selecting all of the songs, the show includes six of his own arrangements. “From last May to September, every time I was home I was downstairs working on the charts,” he said. “There’s a lot of my own musical voice in this, as opposed to when I do a Frank Sinatra or other themed concerts. It’s also the most difficult program that I do, but this is exactly what I need at this time.”