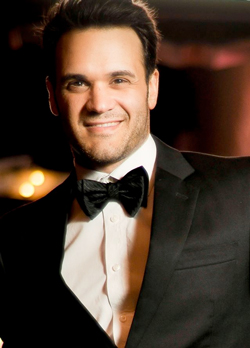 On Thursday, December 31 at 9:00 pm in Severance Hall, Carl Topilow and the Cleveland Pops Orchestra will present its 20th Annual New Year’s Eve Celebration, a concert entitled “My Favorite Broadway.” The program will feature Connor Bogart O’Brien performing songs from the best of contemporary musical theater.

The evening will also include orchestral selections from the Star Wars movies and PBS’s Downton Abbey. At 11:00 pm, there will be dancing in the Grand Foyer featuring Pops Orchestra members, and the No-Name Band will play ‘60s and ‘70s Rock & Roll in the Smith Lobby. As always, the traditional Balloon Drop will usher in the New Year at midnight.

“Carl and I have worked together many times,” O’Brien said, “and my favorite part of performing with him is our banter onstage: we’re like Laurel and Hardy. We have a good rapport, and people seem to enjoy watching us lightly rib each other.”

O’Brien grew up in Ashtabula and attended the Eastman School of Music. Since then he has performed leading roles in Miss Saigon (Chris), Sweeney Todd (Anthony), The Last Five Years (Jamie), Company (Bobby), Joseph and The Amazing Technicolor Dreamcoat (Joseph), Forever Plaid (Sparky), as well as Altar Boyz (Abraham). He has been a featured soloist with the National Repertory Orchestra, Detroit Symphony Orchestra, The Rochester Philharmonic, The Akron Symphony, and The Cleveland Orchestra. O’Brien has recorded jingles for Hasbro Toys and American Greetings, and when we spoke to him, he had just returned from Singapore and Malaysia, where he sang in both English and Mandarin Chinese.

“I’ll be performing eleven songs during the concert, including “Bring Him Home” from Les Miserables, “This is the Moment” from Jekyll & Hyde, and “Giants in the Sky” from Into the Woods,” O’Brien said. We’re also adding some lighter fare, like “I Am Aldolpho” from The Drowsy Chaperone, so as to not emotionally wear out the audience. This is one of the most difficult shows that I do with Carl because they’re all eleven o’clock numbers from Broadway shows — nobody ever does them all back-to-back. But I am looking forward to it.

“Growing up in Ashtabula, I remember when Carl started these concerts, and I remember thinking that I needed to find a way to meet him. I guess I  pulled that off years later. Carl has changed my life in a lot of ways. We’ve become very good friends and I’m very thankful for him.”

O’Brien said that the key to his success is his ability to sing in multiple styles ranging from opera to musical theater to rock. “It’s my claim to fame. It allows me to make a living as an adult, and I’m proud of that.”

He also possesses a very high and pure falsetto, as is evident in his cover of Sam Smith’s Leave Your Lover, something he attributes to being a late bloomer. “I was still a boy soprano until I was almost sixteen years old. My voice did morph into what some people call a bari-tenor, but I never lost that high falsetto. I am thankful for that because so many Broadway roles are built for that voice type.”

O’Brien did seek them out and discovered that there were no Eastman students in the group — they all had academic majors like engineering and political science at the University. “I auditioned, and it was funny because they had to check and see if they were allowed to take someone from Eastman. Then once I was in the group and loving it, I had to hide the fact that I was in it from my teacher at Eastman. I think if he knew that I was singing growly Rock & Roll songs, he probably would have thrown me out of school. So I was living a dual life between Eastman and the Yellowjackets.” After graduating from Eastman, O’Brien formed a rock band before immersing himself in musical theater.

Today he spends part of his time in Asia singing in Mandarin, which took him six months to learn. But he said that while it takes time to learn and master a style, doing so has always led to more work — which is the name of the game.

O’Brien’s decision to learn to sing in Mandarin came at the suggestion of his agent. “He told me it would be difficult to break into the market, but if I wanted to, I should go where the most work is. Right now that is on cruise ships in Asia, especially in the Chinese market. He told me that a Western singer who can perform all of the most important Chinese songs will get work.”

O’Brien spent half a year learning an entire show in Mandarin phonetically — really learning to speak the language would have taken well over a year. “Over the six months I learned about two lines a day. It was beyond difficult, but now I can speak the language a little bit too. It took a long time, but it goes over very well. The audiences love it when I switch from English to Mandarin. Ultimately the six months I spent studying flashcards when and wherever I could has paid off. Now it’s just another tool in the tool chest.”

Jackson began the program with a recitation of Langston Hughes’ poem “Helen Keller” — the first of five poems by Hughes that served as interludes between each piece on the first half. END_OF_DOCUMENT_TOKEN_TO_BE_REPLACED

Pianos with pins and tape on strings, a bass drum and tam tam, crotales, Almglocken, and vibes. Microphones were hooked up all around the instruments. The feed was sent to speakers around the room. Lighting designer Nicholas Houfek hung incandescent globes over the arrangement of instruments from thin black wires stretching across the beams. END_OF_DOCUMENT_TOKEN_TO_BE_REPLACED

From the podium, Elim Chan set an ambitious tone for the evening. The rising star conductor, here in her Cleveland Orchestra debut, has a commanding style, and every twist and turn in Saturday’s performance tracked closely with her baton. END_OF_DOCUMENT_TOKEN_TO_BE_REPLACED