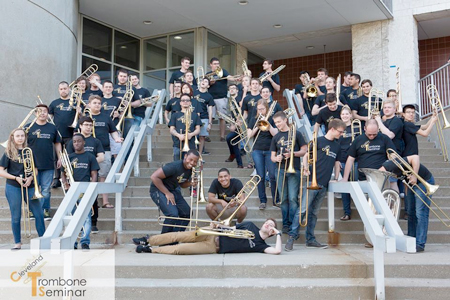 Creating a sonorous volume of sound you could hardly imagine without being there, more than 40 trombonists marked the end of the 2016 Cleveland Trombone Seminar with a massed performance of music by Wagner, Mozart, Mahler, and Richard Strauss on Sunday, June 19 in Drinko Hall at Cleveland State University.

Those four works came at the end of a program of original compositions and arrangements for various combinations of ’bones that showcased the remarkable versatility of the bass members of the brass family. They also marked the end of an era for the Trombone Seminar. Before giving the downbeat, veteran trombonist Mark Lancaster Lusk — who currently teaches at Penn State — gave a valedictory speech noting that this would be his last of his Cleveland seminar appearances, but that he was leaving this annual gathering of trombonists in good hands for the future.

Then Lusk led the brassy choir in gorgeous, confident performances of the “Entry of the Guests” from Tannhäuser, Mozart’s K. 401 Fugue, a “Langsam” passage from Mahler’s third symphony, and Richard Strauss’s Fanfare “Stadt Wien.”

Seminar founder Shachar Israel opened the afternoon concert with David Garcia’s arrangement of John Williams’s Olympic Fanfare and Theme, followed by Rossano Galante’s panoramic work, Transcendent Journey, in an arrangement by Bradley Snyder.  Between those works and the grand finale, the concert was filled with speeches and acknowledgements, obvious manifestations of camaraderie, and excellent performances of a variety of works for trombone ensembles.

Those ranged from an arrangement of the aria from Bach’s Goldberg Variations for four faculty members (a tribute to administrative coordinator Whitney Clair) to pieces for larger configurations, and from the traditional (Uruguayan composer Enrique Crespo’s sonorous Bruckner Etude für das tiefe Blech) to the modern (Kevin McKee’s Last Lap, a 2013 piece that depicts an automobile race, mixing tearing glissandos with noble, Holst-sounding tunes). 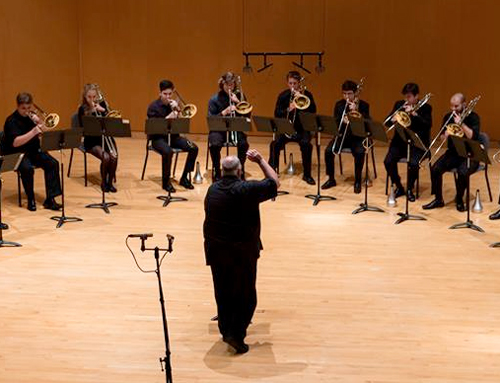 The CTS Associates (a younger group of attendees than the Participants) formed their own ensemble for one of the more substantial pieces on the program, Hungarian composer Frigyes Hidas’s Seven Bagatelles. Lusk led his malleable players in well-paced accounts of these contrasting character pieces, which include a charmingly demented waltz. Later, a finger-snapping Lusk stood behind a Participant Ensemble, gently guiding them through Michael Davis’s jazzy Points West.

You might think that two hours worth of trombone music would lead to auditory fatigue. Not so. Drinko Hall is on the small side and has a bright acoustic, yet the beautiful sounds of those 40+ trombonists enveloped rather than clobbered the ears. It will be fun to see what CTS comes up with next June for its annual final concert.

END_OF_DOCUMENT_TOKEN_TO_BE_REPLACED

The strings-only work by Berg has made relatively frequent appearances on the Orchestra’s programs. In 2021, the musicians recorded it for the In Focus series, and it appeared again on last year’s European tour. Friday’s rendition maintained the group’s characteristic light and effortless playing, each section blending as much as possible to echo the work’s original form as a string quartet. At fifteen minutes total, the piece is quite short, but the dense encoded musical meanings require some extra-attentive listening. Splitting up the three movements ensured that each one could be appreciated on its own. END_OF_DOCUMENT_TOKEN_TO_BE_REPLACED