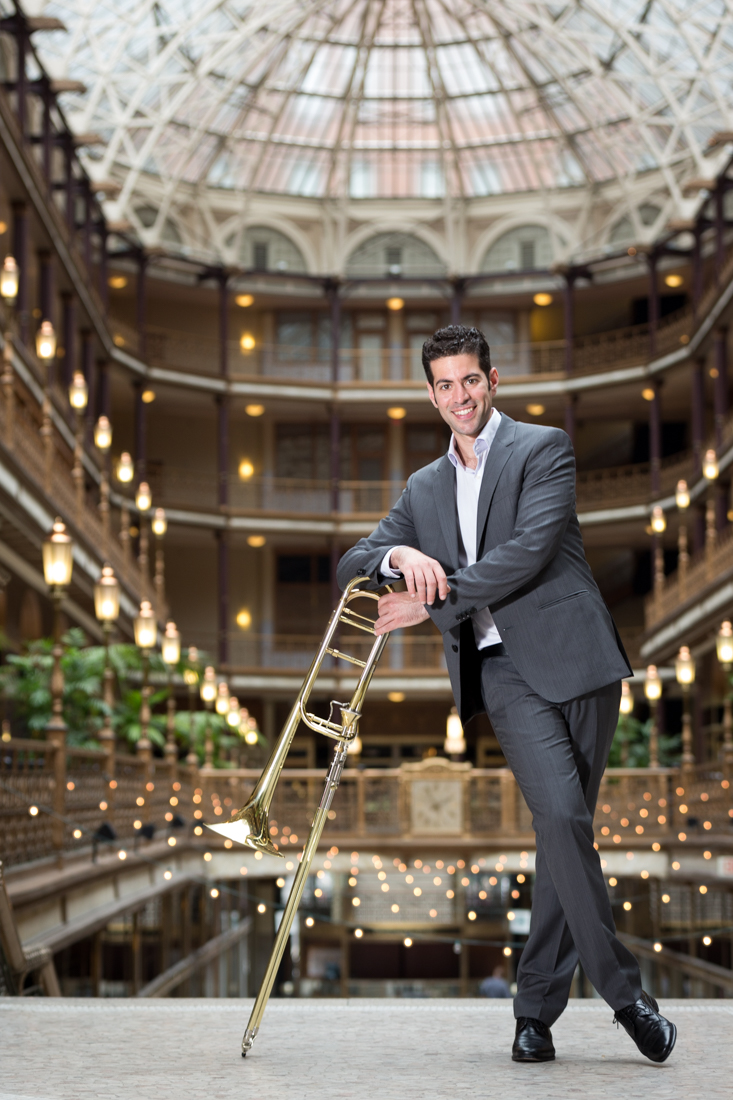 Modeling consummate artistry for the 35 participants and associates in the opening performance of the 2018 Cleveland Trombone Seminar in CSU’s Drinko Hall on Saturday afternoon, June 16, founder and director Shachar Israel showed how varied and engaging a program of transcriptions for the instrument can be.

Israel, who is assistant principal in The Cleveland Orchestra, began his recital with J.S. Bach’s “Rondo e Gavotte” from the solo violin Partita, BWV 1006, one of the pieces included on golden discs aboard the Voyager spacecraft in 1977, and now somewhere in outer space. His playing was similarly stellar — he gently negotiated Bach’s bouncy leaps with only a few nicked notes toward the end.

Brahms’ Clarinet Sonata in E-flat, Op. 120, No. 2, sometimes appropriated by violists, sounded right at home on a different wind instrument, especially in the hands of a player with such a fine sense of tone color and wide range of dynamics. Israel made a striking moment out of the long, descending chromatic line in the final movement, and pianist Martha Locker matched the soloist’s timbre masterfully.

Originally written for solo soprano and an orchestra of cellos, Heitor Villa-Lobos’ Bachianas Brasileiras No. 5 featured Israel as the vocalist in his own arrangement, supported by a staff quartet of trombones — Chris Graham, Mary Tyler, Whitney Clair, and Wes Thompson (bass). The lyrical first movement was alluring, the second part, Dança (Martelo), simply beautiful.

Throughout the hour-long recital, Shachar Israel recognized and thanked his staff and colleagues for their past service and assistance in launching the seventh annual Cleveland Trombone Seminar, which would keep all those slides in motion for the next week. He returned to South American music for a pair of encores, ending with a virtuosic toot through the Brazilian tune Tico-tico.

It might seem that there’s not a lot left to discover after three decades of experience with the Red Priest’s charming and evocative score, but this performance boasted a secret weapon: the young Spanish violinist Francisco Fullana, now the Orchestra’s artist-in-residence, whose affecting personality and easy virtuosity raised the solo part a quantum leap above the merely extraordinary. END_OF_DOCUMENT_TOKEN_TO_BE_REPLACED

END_OF_DOCUMENT_TOKEN_TO_BE_REPLACED

The Cleveland Orchestra’s second performance of the new season on Sunday afternoon, October 17 at the newly renamed Mandel Hall at Severance Music Center was just such an occasion. If the ensemble’s return to public concerts under the baton of Franz Welser-Möst wasn’t enough reason to light a bonfire, the Cleveland debut of a new work written for one of the Orchestra’s most popular soloists, and the swan song of one of its longest-serving members added extra fuel to the celebration. END_OF_DOCUMENT_TOKEN_TO_BE_REPLACED