The concert will feature Nebraska-based tubist, composer, and audio engineer Aaron Hynds, who will perform his own project, Transformer, a large-scale, evolving work for tuba and computer. The work is inspired by the composer’s love of science fiction, and by the realization of the computer as an equal creative entity.

“Aaron’s an alum of the Bowling Green contemporary music program,” CUSP executive director Noa Even — herself a BGSU alum — said during a separate conversation. “He started just as I was leaving and somehow became interested in digital media. His new 45-minute work sounds intriguing, and there are not many brass players, particularly tubists, who are doing anything remotely close to what Aaron is doing, at least not in this country. He’s extending the instrument into a hyper-tuba with the use of electronics.”

Later that evening, Even will pick up her saxophone and join her Patchwork duo partner Stephen Klunk (drum set) for the premieres of Erin Rogers’ Fast Love, Aaron Myers-Brooks’ Four Grids, and Jeremey Poparad’s Crisp Otter. Their set will also include Osnat Netzer’s Zwang und Zweifel  and Hong-Da Chin’s …time was not passing… it was turning in a circle… 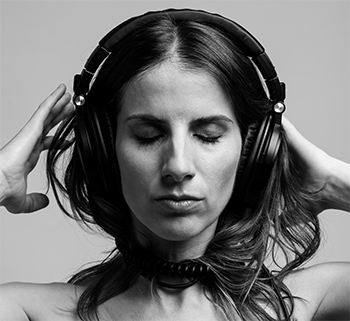 “Erin Rogers (above) is a saxophonist and composer based in New York who’s also part of a percussion/saxophone duo,” Even said. “Her piece is fun and quirky and is primarily comprised of extended techniques. Jeremey Poparad wrote something for our composer readings at Cleveland State. The piece is jazz-influenced — rhythmic and grooving — and the title is a play on words about the saxophonist Chris Potter. And Aaron Myers Brooks is based in Pittsburgh. He’s really into heavy metal and math rock and that’s right up Stephen’s alley because he is also a metal drummer.”

“I met Ammie at a festival on Omaha,” Even said. “I noticed that she was touring her new solo program, and I thought she would be a great person to invite to come here. There are not too many solo violists commissioning young, very interesting composers.”

“Kenneth is an amazing flute player who has won many major competitions,” Benn noted. “He’s a champion of new music and is interested in the issues of identity in contemporary music. He makes conscious decisions to program music by female and LGBTQ composers, and composers of underrepresented communities in classical music.”

On Saturday, March 30 at 8:00 pm, Tatsuya Nakatani will bring his Nakatani Gong Orchestra to St. John’s Episcopal Church. Consisting of seventeen of Nakatani’s adapted gongs played with handmade bows, it is the only bowed gong orchestra in the world.

“This is going to be awesome,” Even said. “Tatsuya was in Cleveland several years back. He was also here last May and I played on a show with him, improvising with some other local musicians. I thought it would be great to bring him back with the Gong Orchestra. He’s a complete master at what he does.”

The concert is also an opportunity for the community to participate — local players, students and people from the St. John’s congregation will be brought together for a technique workshop and rehearsal prior to the performance.

“This concert will bring people together who do not know each other,” Even said. “New music can be challenging for listeners, but this project might bring a new audience to the concert.”

The 2019 Re:Sound Festival will be held from June 6 through June 9.

The music isn’t easy to play, either. Over the course of two hours, all of the musicians brought fantastic focus to the unrelenting tricky rhythms and countless layers of parts, all of which require a high level of individual responsibility. Even in the moments of calm, the accompaniment remains perpetually unsettled. Adams — who made a sprightly presence on the podium — combines minimalist, repeating motives in gradual layers, which eventually become so dense they overwhelm the senses. Lisa Wong deserves special mention for her thorough preparation of the Cleveland Orchestra Chorus, as does Jennifer Rozsa for the Children’s Chorus, which made a brief but memorable appearance in the last few minutes. END_OF_DOCUMENT_TOKEN_TO_BE_REPLACED

Warner was a fitting choice not just symbolically, but also sonically. The combination of Baroque strings, theorbo, harpsichord, and organ created a nice blend and balance, allowing the opportunity for softer instruments to stand out. In Johann Rosenmüller’s Sonata à 5 in g, Doug Balliett’s violone pizzicatos resonated beautifully, and in Johann Heinrich Schmelzer’s Sonata in d, harpsichordist Elliot Figg became an equal player in the texture with his clever improvisations. The slight exception was Joshua Stauffer on theorbo — despite the instrument’s big physical presence on stage, he received little time in the spotlight. END_OF_DOCUMENT_TOKEN_TO_BE_REPLACED