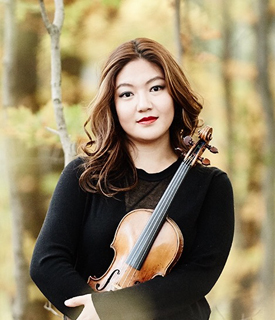 Violinist Jinjoo Cho had barely achieved teenager status when she first appeared as soloist with the Cleveland Women’s Orchestra. She’s been back several times since that debut, meanwhile walking off with top prizes in the Buenos Aires and Indianapolis competitions. Cho returned to help CWO celebrate its 81st-anniversary concert in Severance Hall on Sunday, April 23, this time with a delightful traversal of Henri Wieniawski’s Violin Concerto No. 2 in d led by Robert Cronquist.

In a pre-concert interview with this publication, Jinjoo Cho described Wieniawksi as “the Chopin of the violin world,” and characterized his second concerto as a sentimental work that “highlights the beauty of the instrument and shows what it can do.”

While the piece is well within the capabilities of most talented young players, Cho brought an emotional maturity to the concerto that only a seasoned artist can muster. She put across its virtuosic elements with spirit and style, but incorporated them into a broad, musically sensitive overview of the work.

Cho created expressive dialogues with the orchestra in the slow movement, and made a smooth, graceful transition through the cadenza-like bridge into the finale. Nineteenth-century composers for the violin were obsessed with Gypsy music, and Wieniawski provided the soloist with plenty of room to show off. Here, Jinjoo Cho morphed into the primas in a gypsy band. That role includes acting as the leader as well as the soloist, and Cho clearly urged the rest of the ensemble onward to the end of the piece. She received a long, warm ovation.

The all-female ensemble (except for the two guys who bolstered the trombone and bass sections) began the afternoon with a performance of Modest Mussorgsky’s A Night on Bald Mountain that caught the sinister mood of the legendary witches’ sabbath on Mount Triglav at Midsummer.

The brief “Intermezzo” from Zoltán Kodály’s Háry János, a verbunkos or recruiting dance meant to lure young men into the Austrian army, made a spirited curtain-raiser for the Wieniawski concerto.

The concert ended with Antonín Dvořák’s Symphony No. 8 in G, a guaranteed crowd-pleaser full of beautiful melodies and amiable sentiments, but one that poses a number of challenges for an avocational orchestra.

Things got off to a very promising start with beautiful, sonorous playing from the cello section, but some of what followed was marred by irregular balances and imprecise intonation and ensemble playing. Along the way, we heard lovely wind solos that won individual players bows, but there were also moments of orchestral chaos. The famous trilling horns at the beginning of the finale were engulfed by the rest of the ensemble.

Music director and conductor Daniel Meyer built his playlist around Cleveland themes and scenes. “Exploration CLE” made use of engaging selections from the classical canon and beyond that celebrated “what makes Cleveland so special.” Happily, he and his musicians avoided constructing a visual slide show, choosing to let the music speak for itself. END_OF_DOCUMENT_TOKEN_TO_BE_REPLACED

You could see the relationship at work on a practical level. Repertoire for two players at the same piano requires a certain choreography. There’s just one of each pedal to share, and the hand crossings left and right — which can be so fun to watch a soloist pull off — get more complicated when another person’s involved. At times, Pompa-Baldi drew a hand away from the keyboard and into his body, making room for Friscioni, and at the close of a few delicate phrases, the two were crouched together over the same final notes at one end of the instrument. END_OF_DOCUMENT_TOKEN_TO_BE_REPLACED

The signature sounds of these famous film scores are not so much John Williams’ invention as allusions to other classical pieces. The foreboding half-step from Jaws, growing more and more furious in the cellos and basses, shares something with Dvořák’s “New World” Symphony and Bartok’s Miraculous Mandarin. END_OF_DOCUMENT_TOKEN_TO_BE_REPLACED