The Madison-based powerhouse Clocks in Motion, one of the percussion quartets currently making a name for themselves, returned for their third visit to Cleveland on Monday, September 23 on CSU’s Cleveland Contemporary Players series at Drinko Recital Hall. Clocks — Megan Arns, Matthew Coley, Christopher G. Jones, and Sean Kleve — have taken seriously their mandate to bring new work to life, and offered four works written over the last five years.

On a stage strewn with both familiar and unique instruments, Clocks showed off the myriad ways one can strike an object musically. Each work revealed the group’s collective rhythm, and their finesse in pitch-based sound environments. Their control and clarity were sonorous treats, and they underlined their enjoyable concert with helpful words from the stage to place the new music and the unfamiliar instruments in context.

Two short, propulsive works bookended the evening. Named for the arrangement of tones on steel pans, Adam Silverman’s Spiderweb Lead (2016) is a bustling piece for marbima, vibraphone, steel pan, and hand drums. Opening and closing with drumsticks on the rim of the pan, it fanned out into intricate harmonic textures with a pleasant, continuous pulse.

Anders Koppel’s Mechanical Ballet (2014) for two marimbas, vibraphone, and xylophone was full of wickedly strange and off-kilter ostinatos in the vein of a dark Danny Elfman film score, making one smile at its musical hijinks. Clocks’ precision in both works was captivating — they made the complex seem effortless.

Jennifer Bellor’s three-movement Of Maker and Movement (2018-19) created ethereal sounds with various mallet instruments, sometimes approaching an ambient aesthetic. Marimba, vibraphone, and glockenspiel were joined by two instruments created by the group: the Aquarion — a glass marimba with an otherworldly quality when rolled — and the Galvitone — tuned steel pipes.

The simple, yet detailed beauty of the sounds, some motoric, others melodic, was arresting. By the third movement, the driving rhythms with transitions instigated by cymbal rolls gave it the whiff of stereotypical wind band music. Bellor writes ravishingly and imaginatively for percussion, and Clocks in Motion have made her their resident composer. Three more quartets will come from her pen in the near future. 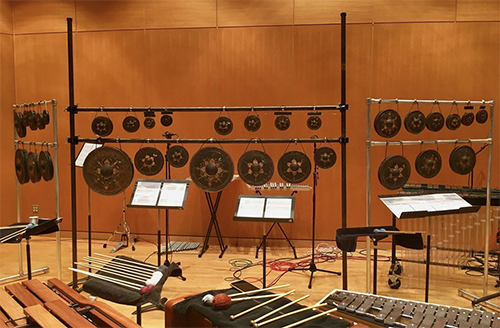 Andrew Rindfleisch’s Chroma (2019) is a large-looming and captivating half-hour of quietness. Written for two marimbas, a quarter-tone-flat marimba the Clocks call a Quarimba, vibraphone, two sets of almglocken (tuned cowbells most familiar from Mahler), a huge set of Thai gongs, a gamelan, tamtam, and bass drum — this work verges on the meditatively disturbing. It seems like something out of La Monte Young or the Wandelweiser Group. The sound of minutes-long soft rolls that slowly rise from the bottom of the four main mallet instruments create an unsettling three-dimensional microtonal buzz that hangs in the air.

The various sections create a large arc that leads to a single, dissonant clang and back to the hushed atmosphere. The ensemble handled the work with great care, so much so that the recurring silence took on an air of imposing stillness.

END_OF_DOCUMENT_TOKEN_TO_BE_REPLACED

The strings-only work by Berg has made relatively frequent appearances on the Orchestra’s programs. In 2021, the musicians recorded it for the In Focus series, and it appeared again on last year’s European tour. Friday’s rendition maintained the group’s characteristic light and effortless playing, each section blending as much as possible to echo the work’s original form as a string quartet. At fifteen minutes total, the piece is quite short, but the dense encoded musical meanings require some extra-attentive listening. Splitting up the three movements ensured that each one could be appreciated on its own. END_OF_DOCUMENT_TOKEN_TO_BE_REPLACED